Acidification – Faster Than You Think 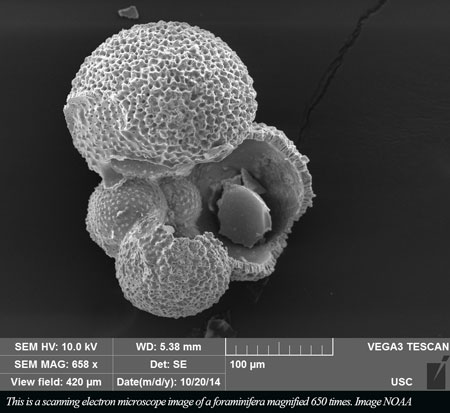 Tiny calcium carbonate shells tell us how fast the ocean is acidifying.

We were alarmed by recent headlines that said, “Waters Off California Acidifying Faster Than Rest of Oceans, Study Shows.” We live in coastal California. Acidification is a drop in the ocean’s pH that occurs when excess carbon dioxide in the atmosphere dissolves in seawater. The study featured in the news article examined the fossil shells of foraminifera, a simple-shelled planktonic organism that uses calcium carbonate to build its shells. Researchers found a 20% reduction in calcification in the shells of foraminifera in the last century. Shell-building marine animals need the carbonate ions from the ocean and they’re becoming scarcer with a more acid ocean.

Why California waters? Coastal California has a phenomenon called upwelling. It brings colder,  nutrient-rich water to the surface, supporting abundant marine life. It also brings more acidic water from the deep to the surface. So, the ocean off California was already more acid than the rest of the world’s oceans and climate change is increasing that acid level. Can animals adapt quickly enough to these changing conditions? That remains to be seen.

It’s not just California: the entire west coast is also experiencing acidification now. There’s upwelling in parts of Oregon and Washington also and oyster farmers are feeling the impact. The oyster larvae can’t grow their shells fast enough in more acidic water that’s dissolving those new shells. The farmers are trying to adapt to the changing waters.

Of course, the entire ocean’s chemistry is changing. A recent  expedition collected the same type of plankton in the same places as the 1870’s Challenger expedition and compared current shells to those housed in a museum collection. What they found was “shocking to the scientists: for one species of foraminifera, for example, on average, all modern the specimens had up to 76% thinner shells than the historic specimens.”

Watch: PBS News hour on the impact of acidification on oyster farms and other shellfish fisheries