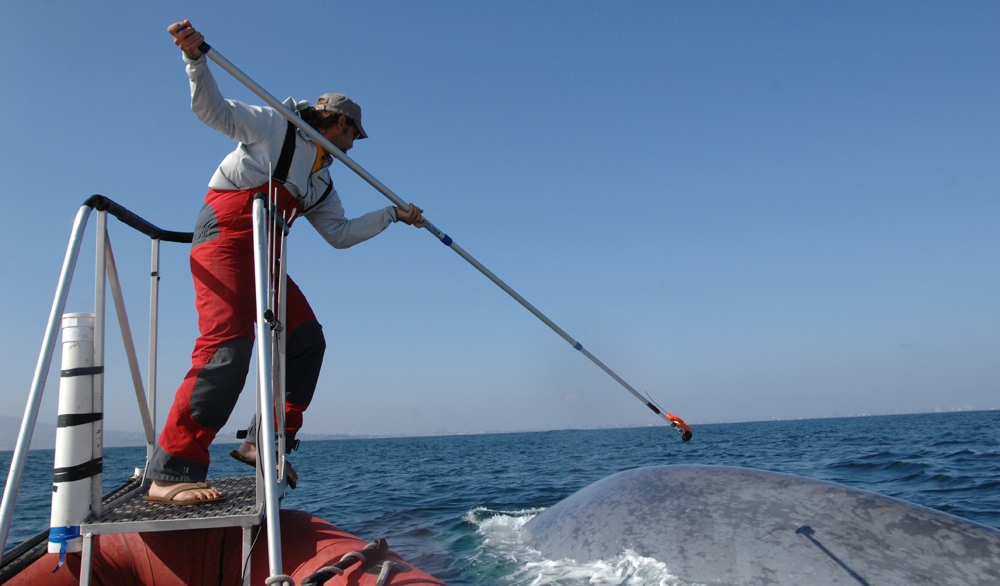 The Real Prince of Whales

Meet Jeremy Goldbogen. He tags whales. Yep, he pretty much has one of the coolest jobs of anyone we know.

Through Jeremy’s research we get to cruise the ocean on the back of whales and experience how they eat krill, make those amazing noises and maneuver with surprising agility.  With a device the size of a book, Jeremy speaks volumes about the largest animals ever known to live on earth.

Jeremy Goldbogen, Assistant Professor, Biology, at Stanford University’s Hopkins Marine Station, specializes in whale feeding ecology. One of Jeremy’s earliest memories was being outside mucking around in upstate New York. It was a program at a local college that took kids outside. This gave him a sense of discovery that has carried him through his science career. In high school, a teacher named Mr. Wynn, told good stories. Jeremy wants to tell good stories to communicate about his work. 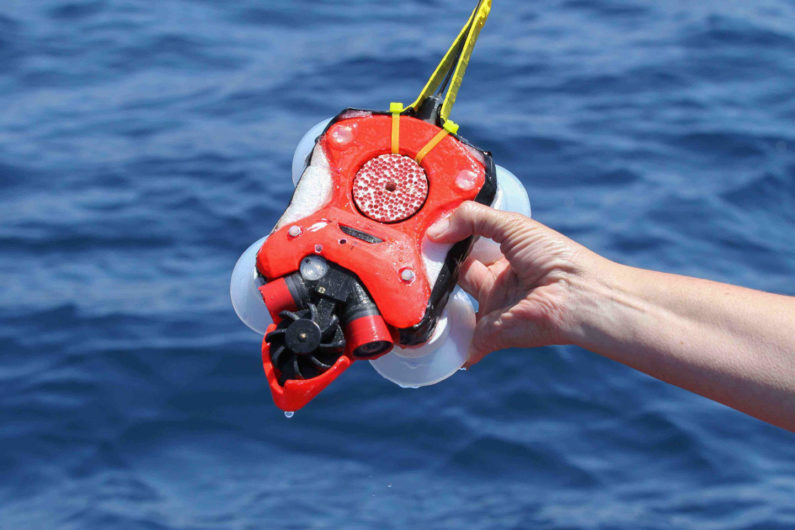 In college at the University of Austin, Jeremy was in a work-study program in a hummingbird flight lab. That’s where he got the biomechanics bug; the lab also studied the flight of flying squirrels and butterflies. He was amazed by the mechanics of butterfly flight. Jeremy then went to the Antarctic to study pteropods, a pelagic mollusc that looks like it’s flying underwater.

Jeremy started his PhD at Scripps and then continued at the University of British Columbia with a focus on fish locomotion. Jeremy says he switched to whale research by accident-- some tag data landed in his lap. In those tags there was feeding data; the motion of the whales’ feeding intrigued him and became his PhD topic. Following his doctorate, Jeremy did a Post-Doc with Cascadia Research looking at how military sounds affected whales. The common response he found was that the sound stopped the whales from feeding.

In his current research, Jeremy is using tags on baleen whales (mainly blues) to understand feeding and other behaviors. 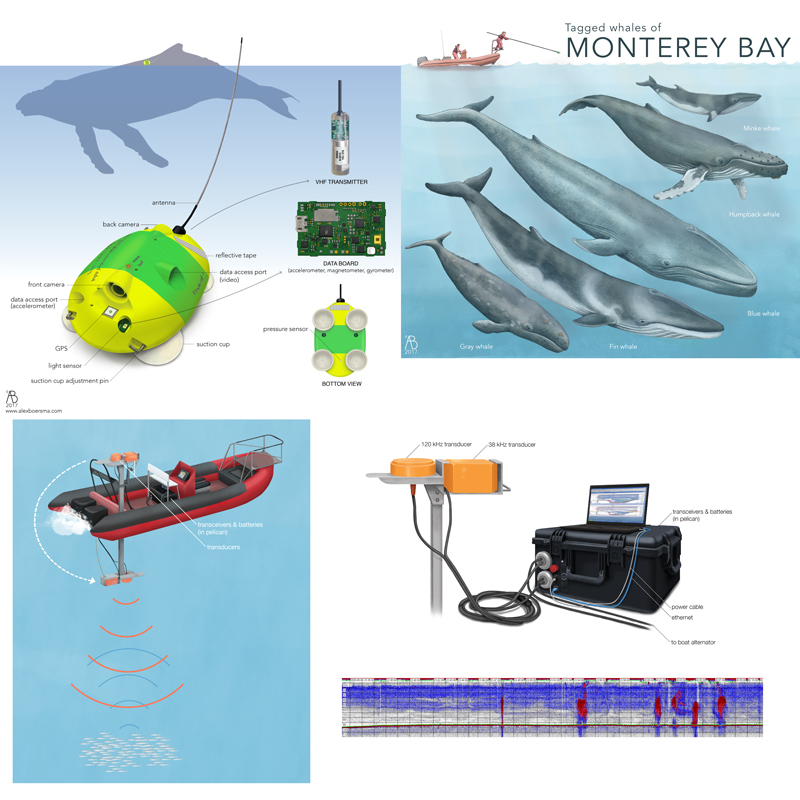 Here in Monterey Bay, blue whales feed on aggregations of krill that can be hundreds of meters thick over the canyon. The krill tend to pile-up on the Monterey Bay canyon edges during the upwelling season.  Humpback whales clearly feed in groups, but blues were thought to be more solitary feeders. 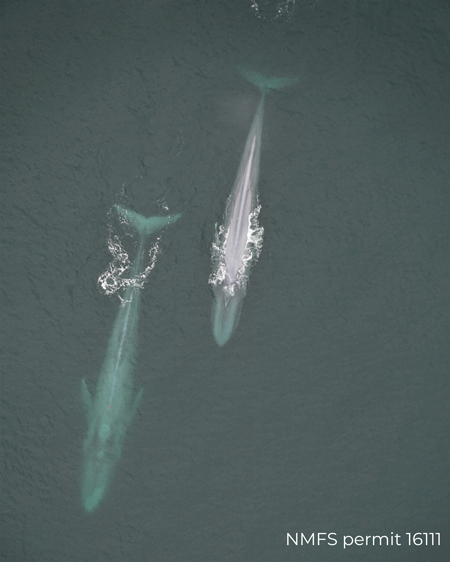 When the blue whales gather here, Jeremy has observed that they are paired up, lunging together as they feed. What are they doing?

What’s the advantage? They’re clearly coordinated even when feeding at depth. The leader is typically female. Jeremy’s lab is still analyzing the data to figure out if the leader is maintained trail and how they behave relative to one another.

The whales are communicating as they feed, and the lab is analyzing the calls to figure out what they mean.

Tags are attached to the whale with simple suction cups and the whales don’t seem to care. The tags passively come off or can be programmed to release. A tag will consistently transmit when it’s popped off so researchers can retrieve them.  Various instruments are built into the tags: both front and back facing cameras; hydrophones to record sound; accelerometer to detect low frequency calls and record they speed of travel.

Another project in the lab involves toothed whales that feed very differently than the baleen whales. What is a whale’s life like if it has teeth and uses echolocation versus filter-feeding? The lab looks at squid beaks in the stomachs of stranded sperm whales. They don’t see many giant squid beaks: less than 1%. The conclusion: there’s limited large prey to feed a whale the size of sperm whales. That’s why sperm whales don’t get as big as blue whales. Filter feeding makes it easy to evolve a huge body size efficiently; the largest whales are baleen whales.

Baleen whales didn’t become big until very recently-- three to five million years ago. Paleontologists say upwelling was intense in that period. It was a “Time of Giants”; the largest whales got giant then.

Jeremy’s lab is buzzing with the activity of his five PhD students, two post-docs, plus interns. They have hundreds of tags deployed now. Some have recorded blue whale heart rates using an electrocardiogram. The rate goes down to two beats/minute when they dive. They’ve evolved to modulate their heart rates. This is the first time that blue whale hearts have been recorded. Other students are studying baleen and how the filter actually works. Students are also discovering how microplastics may affect the baleen feeders.

Jeremy is trying to make connections wherever possible to climate change. What do we know about how climate change is affecting the big whales? Blues are dependent on krill and krill depends on upwelling for their food. We know that upwelling will change with global warming. The “hot spot” for blue whales used to be Southern California and now it’s in Monterey Bay because there’s more krill here now.

Another way that human actions impact whales is shipping. Large cargo ships collide with whales, injuring and sometimes killing them. How can we minimize ship strikes while also supporting the economics of shipping? This requires dynamic ocean management based upon the whale data that is currently being generated by Jeremy and his students.

Jeremy is optimistic for the future. The data and analyses that Jeremy and his team are collecting will serve as a large spring-board for the next generation of scientists. He thinks institutions need to do more to lower the barriers to become a scientist. It is difficult to get female post docs because of family pressures. We need more support, like childcare care and flexible hours that better serve families of post-doc researchers.

Read more about the Goldbogen lab and his work.