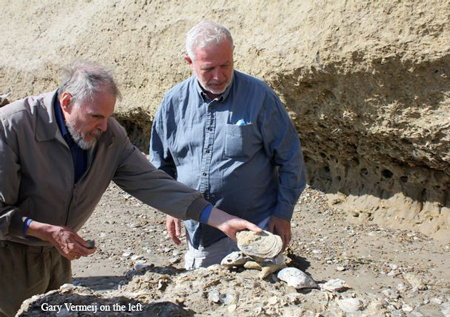 The Whole World at his Fingertips

When we filmed Evolutionary Biologist Geerat (Gary) Vermeij for Shape of Life we were awed by how he could tell us so much about a shell by feeling the shape, the texture, the bumps and even the repairs. Blind since age three, Gary studies the form and function of molluscs in a completely unique way – using his figertips. He says his parents encouraged him to explore the natural world. His blindness was not a disability in exploring the world around him; it made him sharpen his other senses.

Gary surprised professors with his abilities: he graduated from Princeton and received his PhD from Yale. Gary has been on the UC Davis faculty since 1989. He wrote the book on shells (1993) A Natural History of Shells and has written several other books (see the list below).

Gary is probably best known for his work chronicling the “arms race” among long-extinct molluscs and their predators.

“Molluscs have all these wonderful variations. The diversity on the simple theme of a spiral is kind of like listening to Bach all your life.” Gary Vermeij

Molluscs developed thicker shells to survive their predators—even crabs. Over time shells in some species of molluscs evolved thicker shells and, in turn, crab claws became stronger. In 1992 Gary was awarded a MacArthur “genius” award for his research on the evolutionary links between shell-bearing ocean creatures and their predators.

Gary’s research on the evolutionary “arms race” has continued throughout his career. He illustrates the processes that drive evolution and the human economy are the same: competition for locally limiting resources, cooperation, adaptation, and feedback. 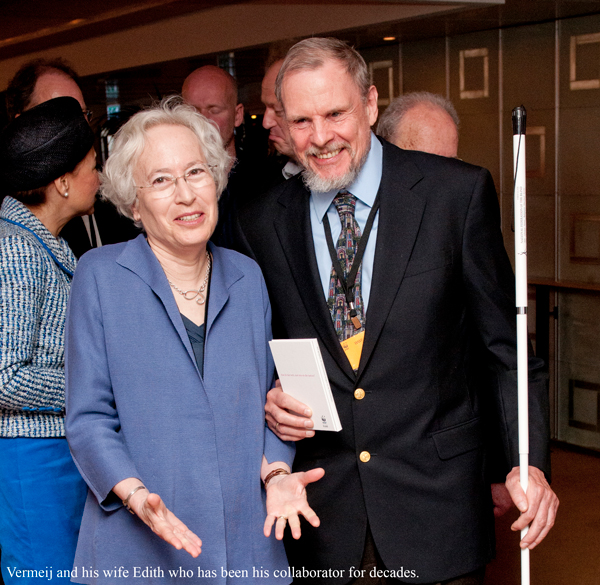 When Being Bottom Heavy Means Survival

One of Gary’s (many) current projects looks at snails (fossils and living) that are bottom-heavy with a thick pad of calcium carbonate on the underside. He’s found that this trait evolved at least 56 times in the last 100 million years, in warm waters. His hypothesis is that predators are mostly responsible. The heavy-bottomed shell may make it harder for a predator to turn the snail over to get at the animal inside. Probably, the predators are fish or other snails.

Curiosity drives Gary’s work. Since the age of twelve, he has kept a scientific notebook. For students of all ages, Gary says: when you walk around a forest or the shore, observe things. You just need all of your senses and your brain in gear. Maybe someday observations will be a subject to work on. And Gary should know as he studies an incredible diversity of subjects. In fact, he says he rarely knows what he’ll be working on next; that’s the story of his life.

Today, scientists are doing much less natural history than in the past. Observations of the natural world are a major source for our understanding of what makes evolution tick. Gary says, “if you want to understand adaptations and natural selection you need natural history.”

Gary thinks a lot of natural history can be achieved by Citizen (Community) Scientists. It’s a golden opportunity for students (and everyone), when properly directed. Individuals can go to the coast, forest and even their backyard and make observations and contribute to projects. Everyone benefits from observation while contributing to Natural History.

Natural History and the Climate Crisis

Observation and natural history are key to understanding the impacts of climate change. Knowing how the natural world is now, and then recording observing the changes of  animals and plants is key. Many of the changes are going on in the tropics as species move north or south in response to warmer ocean temperatures We have to rely on members of the public to find and identify species as their ranges shift.

We’ve long marveled at Gary’s super senses. We hope you’ll explore more about Gary in the resources found below.

Vermeij wrote about Being a blind scientist.

Books by Vermeij
Privileged Hands: A Scientific Life, 1996
Nature: An Economic History, 2004
The Evolutionary World: How Adaptation Explains Everything from Seashells to Civilization