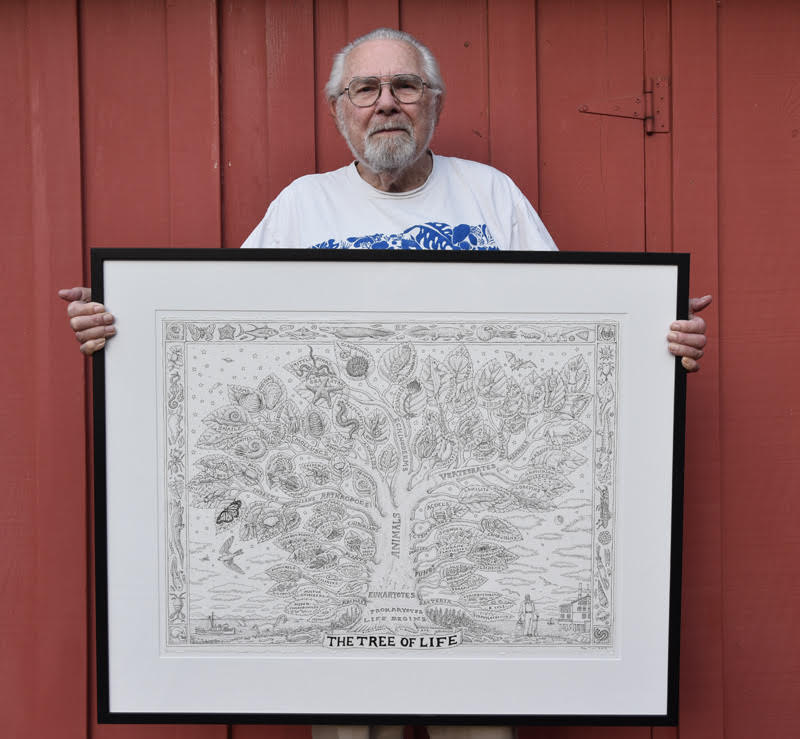 Scientists use a tree with branches to represent the common ancestry and evolutionary relationships of earth’s different kinds of organisms. In 1859 Charles Darwin sketched a Tree of Life in his book, “The Origin of Species”. He was explaining how a genus of related species might have originated from a common ancestor. This was the beginning of using a tree as a model for evolution. Since then there have been thousands of Tree of Life drawings as our knowledge has increased.

In 1992 a friend of ours, the artist Ray Troll, created his own gorgeous and quirky version. Since then he has created trees for various animal groups, which we think are delightful and engaging. So, when our friend, biologist Chuck Baxter, was turning 90, we decided to ask Ray to create a new animal Tree of Life for him and for the Shape of Life. Ray agreed, saying “It was a great honor to be asked to do something for Chuck Baxter on such a momentous occasion!”

Scientific knowledge, of course, changes, and new knowledge about the evolution of animals means a new Tree of Life. We knew that with all the modern gene sequencing and protein analyses, scientists have constantly revised the tree’s branching. As a first step, we asked Chuck, himself for an up-to-date Tree. To our amazement he hand drew his version. It was very complex, and we thought, “Wow, this is great but it has too many branches and includes organisms people don’t even know.” We also enlisted the help of John and Vicki Pearse who are authors of one of the most popular textbooks about invertebrates, “Animals Without Backbones.” They love Ray’s art and they are currently creating an updated tree themselves. 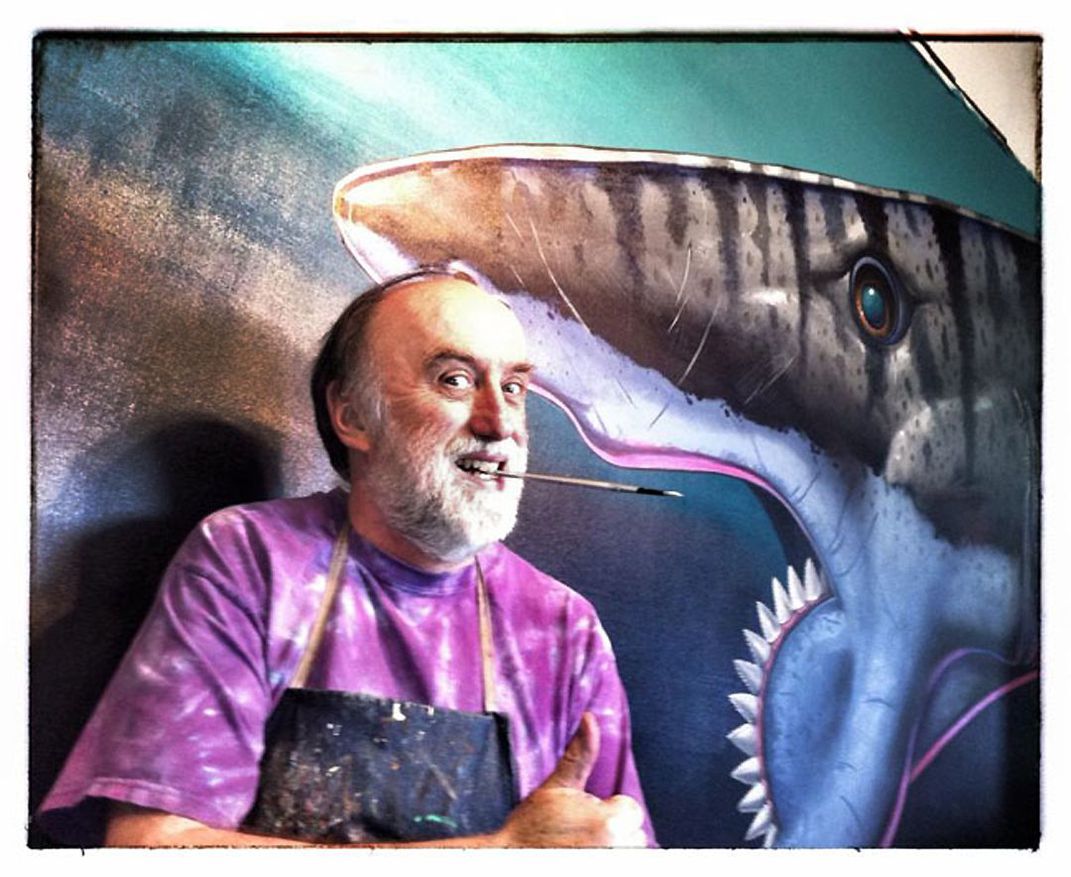 Together, our team started work on revising Ray’s original tree based on Chuck’s sketch, followed by months of in-person meetings, phone calls and oh-so many emails. Scientific papers about the evolution of animals in general and specific placement of animal groups flew back and forth. One we read was titled: “Embracing Uncertainty in Reconstructing Early Animal Evolution”. Yes, indeed! Another was: “The hidden biology of sponges and ctenophores.”

John pointed out to Ray, ”Your tree also leaves out a lot of other protists (flagellates, amoebas, and parasitic forms), but again maybe that doesn't make any difference here.”

He adds, “So the trick will be to place choanoflagellates between fungi and animals.”

And on the back and forth went.

A tricky issue were those Ctenophores.

John reminded Ray,  “Of course, the placement of ctenophores is what is most up in the air now. I think Chuck has them aligned with cnidarians as you have them….  But it remains too early to know. Maybe the ctenophore leaf should be attached closer to the base of the cnidarian leaf so that ctenophores, cnidarians, sponges, and other animals come out more or less together.”

Chuck weighed in, “ ….The ctenophore placement should make some sense in evolutionary relationships as well as making the gene guys happy.”

After Ray drew four versions, Chuck finally wrote, “While this could be continually tweaked to satisfy critics’ perspectives, this seems so appropriate for a general audience to get a sophisticated synoptic view of the diversity of life.”

Yeah! It’s a wrap. Ray then started the hard work of drawing the tree with all its illustrations.

After finishing the work Ray’s final comment was: “The tree appears to be very complex at first glance but the level of detail is only so deep. Rest assured that every branching point has been carefully debated and reflects the latest scientific thinking. I warned the group when we started the process that ‘when you hire Ray Troll you get Ray Troll’ so of course there's a cheeseburger, lobe finned fishes and a killer bunny rabbit lurking by the base of the tree.”

"Ray Troll's Tree of Life is so gorgeously rich an image that one could almost neglect to appreciate how thoroughly researched it is. Ray was meticulous in asking scientists to evaluate current hypotheses. From his synthesis of knowledge and quirky art grew the tree --- solid science in a stunning package. Every time you look, you see more," a satisfied John and Vicki Pearse added.

We're very excited about sharing Ray's work with our science teacher friends in Atlanta on March 15 - 17 at National Science Teachers Conference. Stop by our booth #1332--- you might win your very own poster! 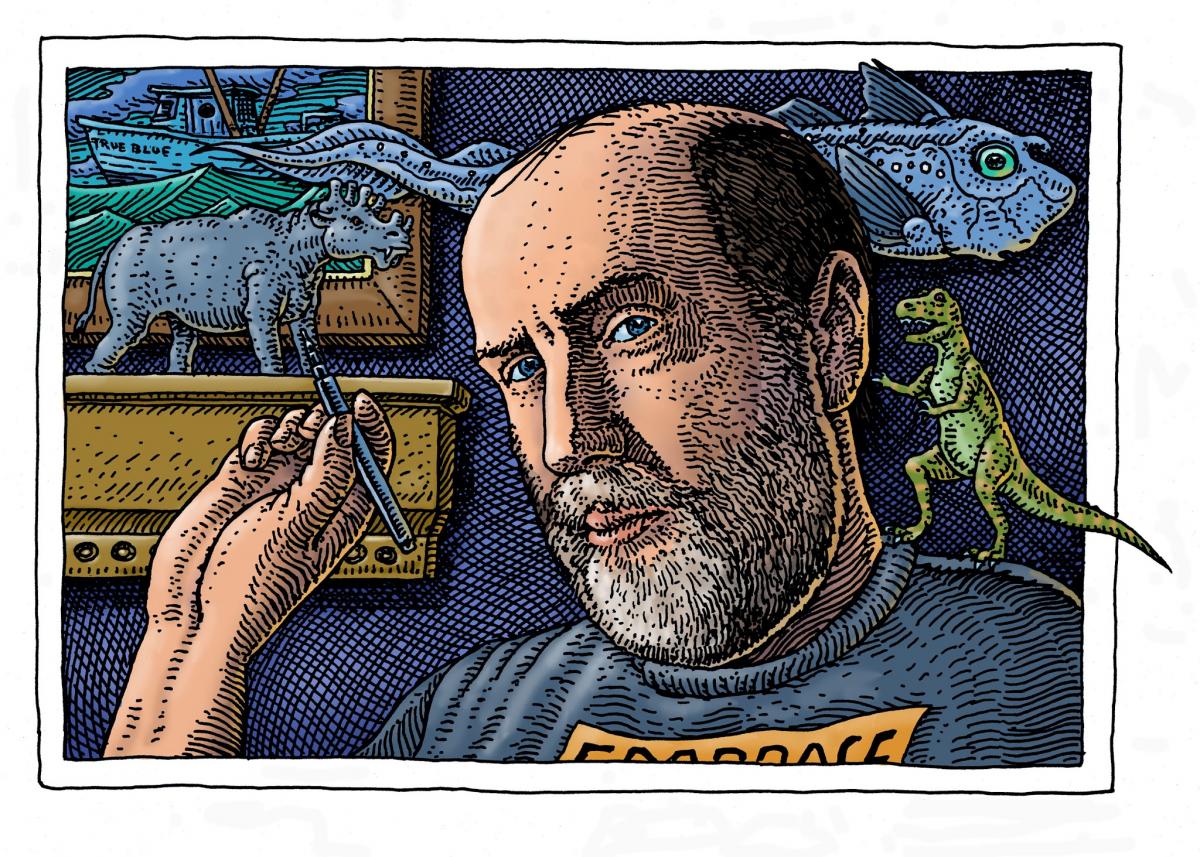 Own a piece of Ray Troll's fine artwork printed with high quality, lightfast inks on heavyweight acid-free paper. Each art poster is individually signed by Ray. Shipped in sturdy round tubes.

For your own signed print, visit: