Cephalopods — squid, octopus and cuttlefish—all have chromatophores, organs with pigment cells that the animals control with muscles, and use for camouflage and communication. The animals can rapidly change the color patterns on their bodies. The patterns are created by the expansion and retraction of chromatophores. 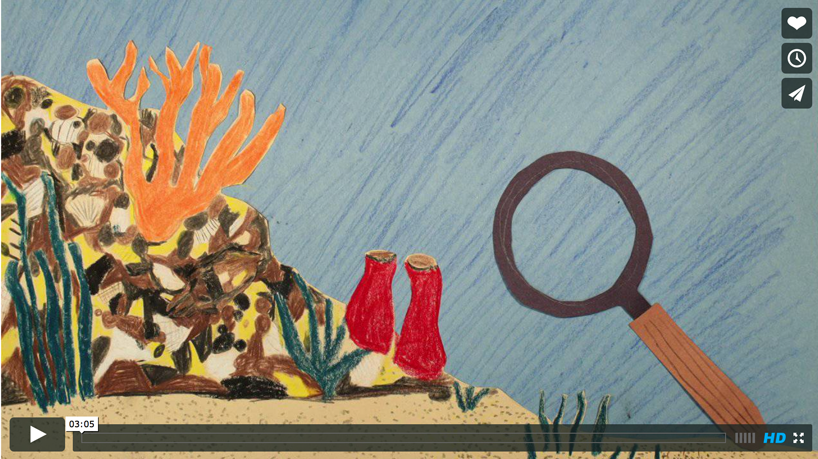 This video shows how cuttlefish camouflage themselves. 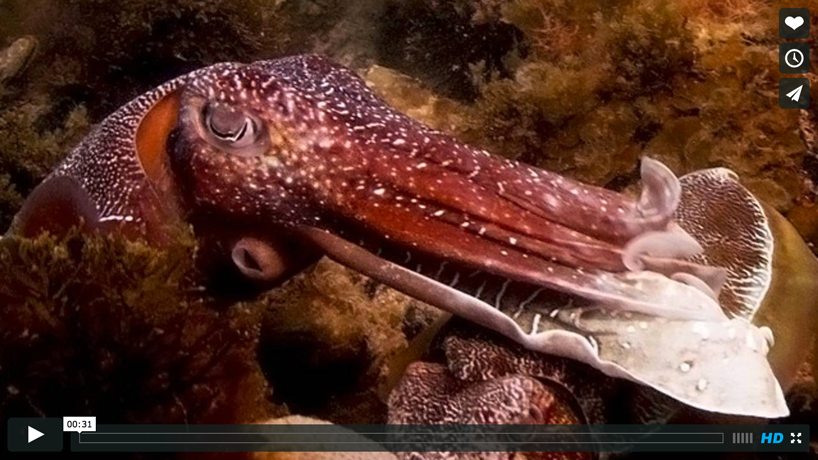 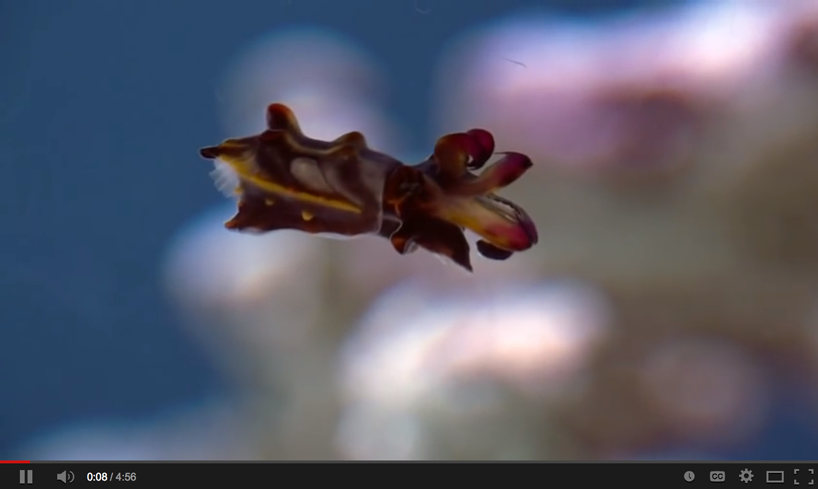 The Monterey Bay Aquarium displays cuttlefish in their "Tentacles" exhibit, but they don’t take them from the wild, they raise them from eggs to juveniles, called culturing. 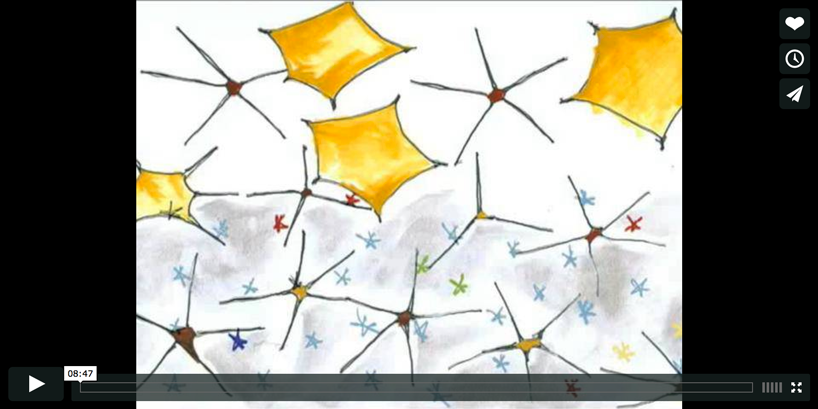 In addition to chromatophores, squid also have iridescent cells that they can assemble and reassemble to make iridescent patterns. 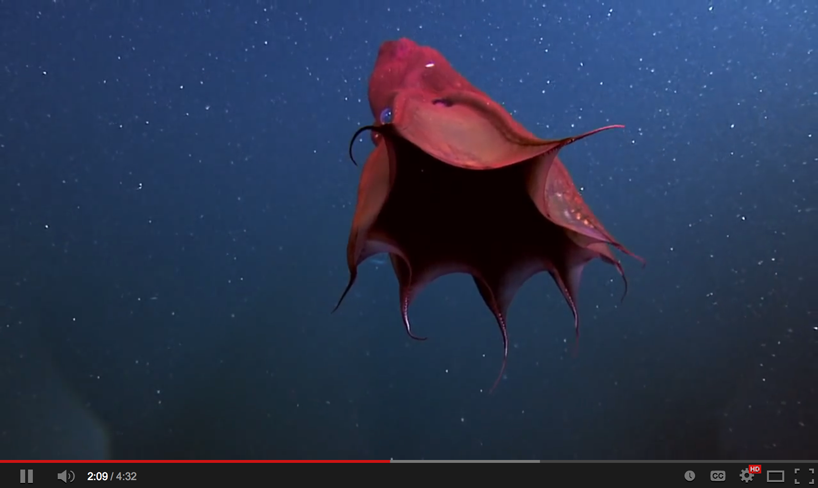 The vampire squid is an ancient animal that lives where few others live: the oxygen minimum zone. 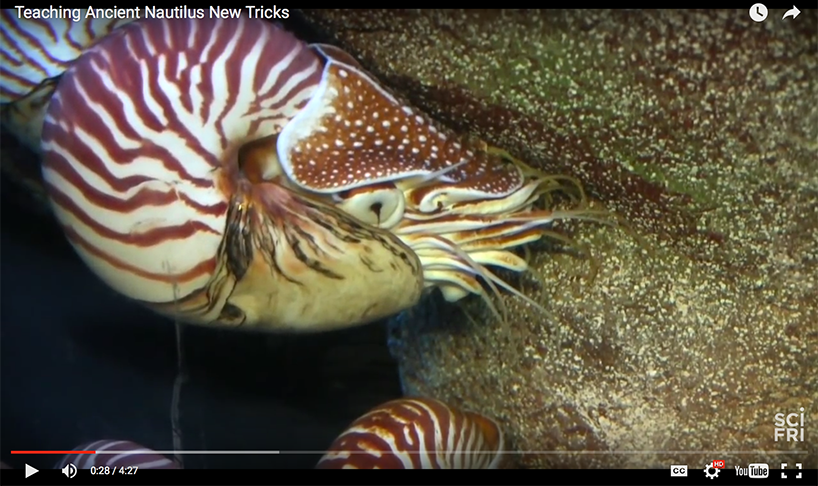 Nautiluses are ancient shelled cephalopods. They can live as deep as 2000 feet. Every day they ascend from the depths to shallower (but never shallow) water. It’s hard to tell by looking at them how they ascend and then sink. Watch this video for an explanation: http://vimeo.com/58632858 and watch Shape of Life video Scientist: Peter Ward. A scientist wanted to understand how capable of learning nautiluses are. It turns out they’re very capable. 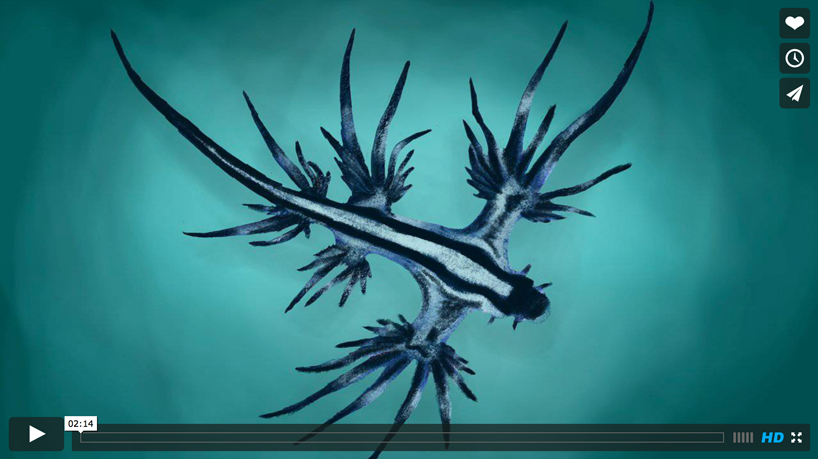 Nudibranchs are shell-less snails, also called sea slugs. One nudibranch, Kleptocnidae, has stinging cells it uses against predators. It doesn’t make its own stinging cells but harvests them from their jellyfish prey. 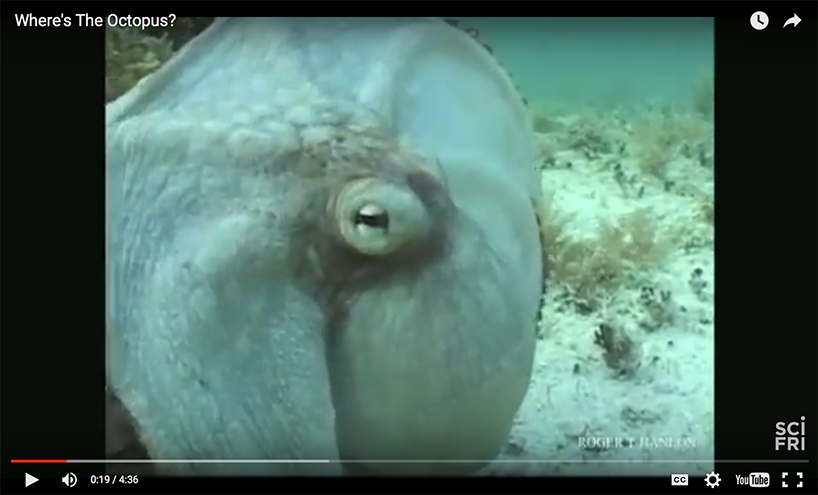 A Science Friday video about a scientist who studies camouflage in cephalopods. 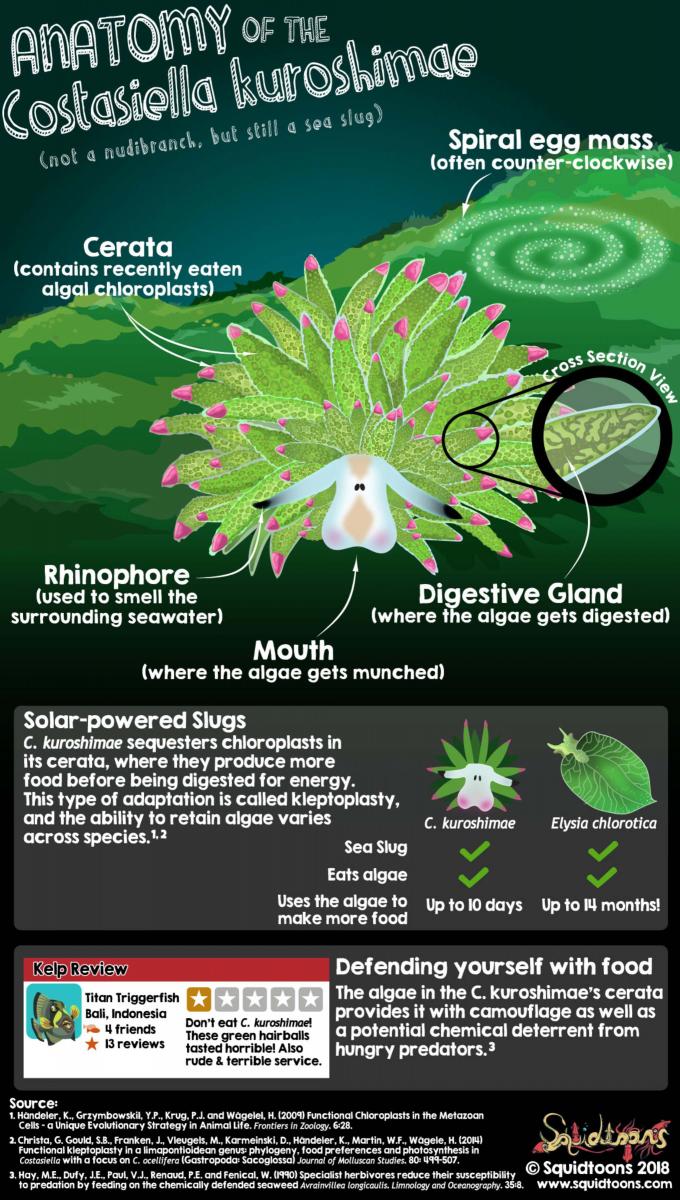 ANATOMY OF A MARKET SQUID

ARMOR AND SPEED  The Survival Game

Excerpt from the Shape of Life book

NIGHT OF THE AMMONITES 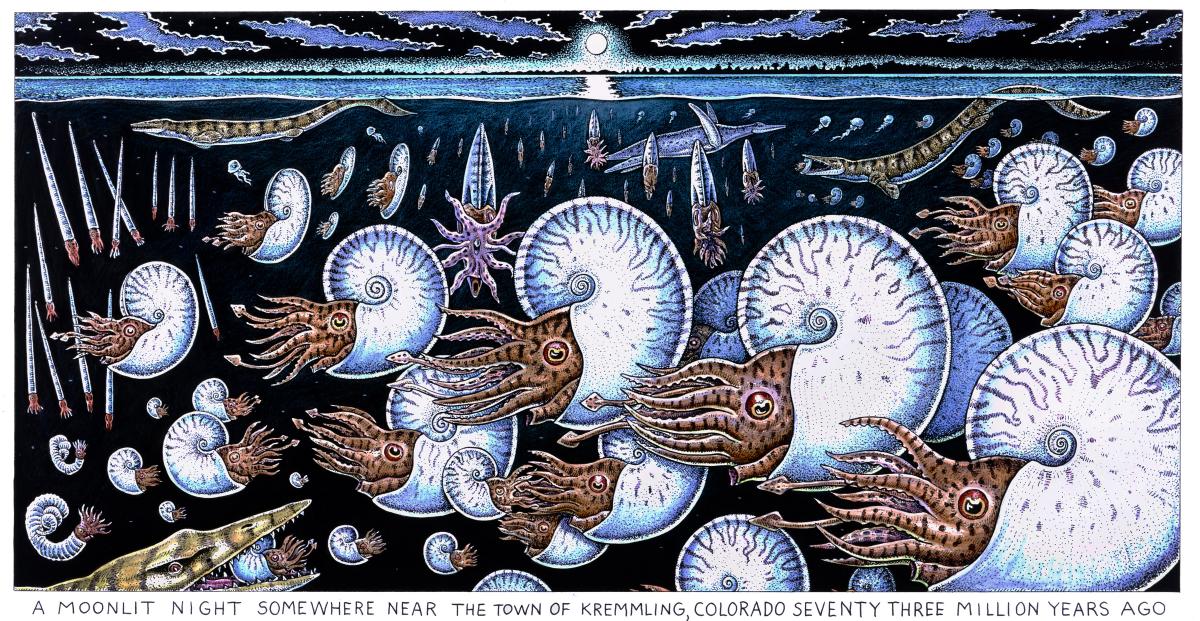 Read about bivalves, Malacology Monthly: A Look at Bivalves, From Both Sides Now

Read about gastropods, Malacology Monthly: Spines and How to Use Them

Cephalopods live in the deep sea as well as in shallow waters. One of the most unusual is the vampire squid. Unlike other squid, it doesn’t hunt live prey. Despite its name, the vampire squid feeds on bits of dead organisms and poop that slowly sink to the bottom called marine snow. To feed, the squid uses string-like filaments that it extends outward from its body. Read about the squid and see a video.

Nudibranchs are shell-less molluscs, also called sea slugs. They are found throughout the world’s oceans but are most numerous in the tropics. Nudibranchs are carnivores preying on sponges, anemones, corals, and even other nudibranchs. Most nudibranchs are very colorful, getting their color from the food they eat. Some colorful species have a warning coloration: colors and patterns that advertise that they’re poisonous or taste nasty. They have special glands that contain chemicals derived from their sponge food. Read about color in nudibranchs. A gallery of nudibranch pictures.

This site publishes a photo a week of sea slugs. This current one is wild looking.

Here's a link to a documentary about the first filming of a giant squid.

Jet-setting Cephlapods. Try this activity from Science Friday in your classroom.

Of course, the cool cephalopods aren't the only molluscs. This shows images of patterns of fossil sea shells.

The Squid With a Green Eye

A Little Lemon with Your Microplastic?

Watch this octopus carrying around coconut for later use

A genetic oddity may give octopuses and squids their smarts

There are many species of deep-sea cephalopods, and new ones being observed every year as scientists can go deeper to unexplored places. Read about a deep sea octopus. Watch these videos. Of course, there are other molluscs feeding on the bottom. A unique group of animals lives and feeds at hydrothermal vents. Read about clams and mussels.

Listen to the podcast For Oysters, Challenges and Hope in the Changing Ocean.

Ocean acidification can affect individual marine organisms along the Pacific coast, by changing the chemistry of the seawater.

How carbon pollution is wreaking havoc on marine life.

One of the elements of an abalone’s shell is calcium carbonate as is the oyster’s shells. Animals with shells made of calcium carbonate are threatened by changes in the ocean’s chemistry: the ocean is becoming more acidic. Oyster farms are already feeling the effects of acidifcation

Pteropods, also called sea butterflies, are tiny marine snails that swim using “wings”— a snail’s modified foot. In many parts of the ocean, pteropods are an important food for zooplankton, fish, and seabirds. Pteropods are among the marine creatures most vulnerable to ocean acidification, a change in ocean . Because of human activity, carbon dioxide is being created faster than it can be absorbed through natural processes. It is excess carbon dioxide that is the problem. Ocean acidification lowers the availability of the mineral aragonite that pteropods use to form their shell, hindering this snail from building its protective armor. Read more about pteropods and ocean acidification in "Amazing Sea Butterflies Are the Ocean’s Canary in the Coal Mine".

Mussels use tiny threads to hold tightly onto rocks so they won’t be swept away by crashing waves. The threads, which are often called beards when you buy mussels in a seafood store, are called byssal threads. They are both stretchy and hard, acting as a holdfast and a shock absorber. This is unusual and scientists wanted to understand how they work so they can use the knowledge in designing new materials.

Abalones have beautiful and strong shells. The inside is iridescent and is a source of Mother-of-Pearl (the main source is oysters). The shell is stronger than any modern ceramic, so scientists have examined the structure to try to mimic it to create a lightweight building material. Read about abalone shells.

Cone snails use powerful venom to paralyze their prey so then they can eat them. Researchers have isolated one component of this complex cocktail; that has the potential to be a powerful pain killer: read about it and see video of cone snails in this NPR article.

Other components of cone snail venom show promise in treating some cancers and additions. More info.