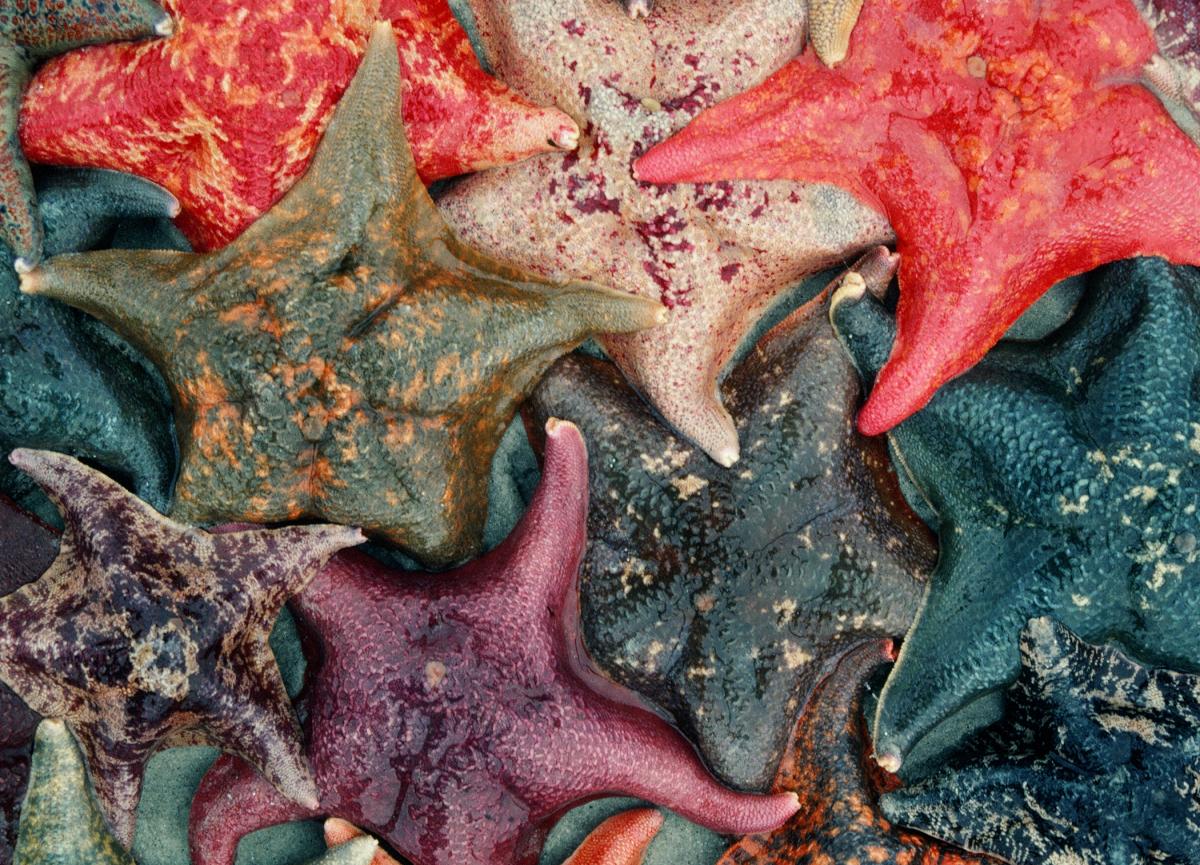 As the atmosphere has warmed due to human-driven climate change, the ocean has taken up an excessive amount of both heat and carbon dioxide. These changes are impacting many marine organisms now in ways we are just starting to understand — and likely in ways we don’t yet understand.

Sea star wasting disease (SSWD) has decimated more than 20 species of sea stars on the west coast. Scientists have found that the times and locations of the biggest sea star death coincided with the presence of abnormally warm water. The sea star’s relatively simple immune systems might be weaker when sea stars get hot.

Recent research (2020) shows that the cause may be respiratory distress. Increased bacteria growth next to a sea stars’ skin uses up oxygen, leaving not enough for the sea stars. In addition, the warmer the water, the less oxygen it contains. The ocean is slowly being ‘deoxygenated’ as a consequence of climate change.

The influx of carbon dioxide to the ocean is changing the chemical composition of seawater, making it more acidic and more harmful to many kinds of marine life. Ocean acidification (OA for short) poses a critical threat to shell building organisms that use calcium carbonate (called calcifiers). One of the key marine groups most likely to be impacted by acidification are the echinoderms.

Researchers investigate the possible impacts of climate change by exposing larvae and adults to water that simulates warmer and more acidic seawater. Based on those experiments, researchers predict that echinoderm larvae exposed to those conditions will be smaller, take longer to develop and may have developmental abnormalities. “The combined effects of increased temperature and ocean acidification are unpredictable and frequently interact.” In addition Increased acidification may make some species of adult sea urchins less tolerant to warmer temperatures. 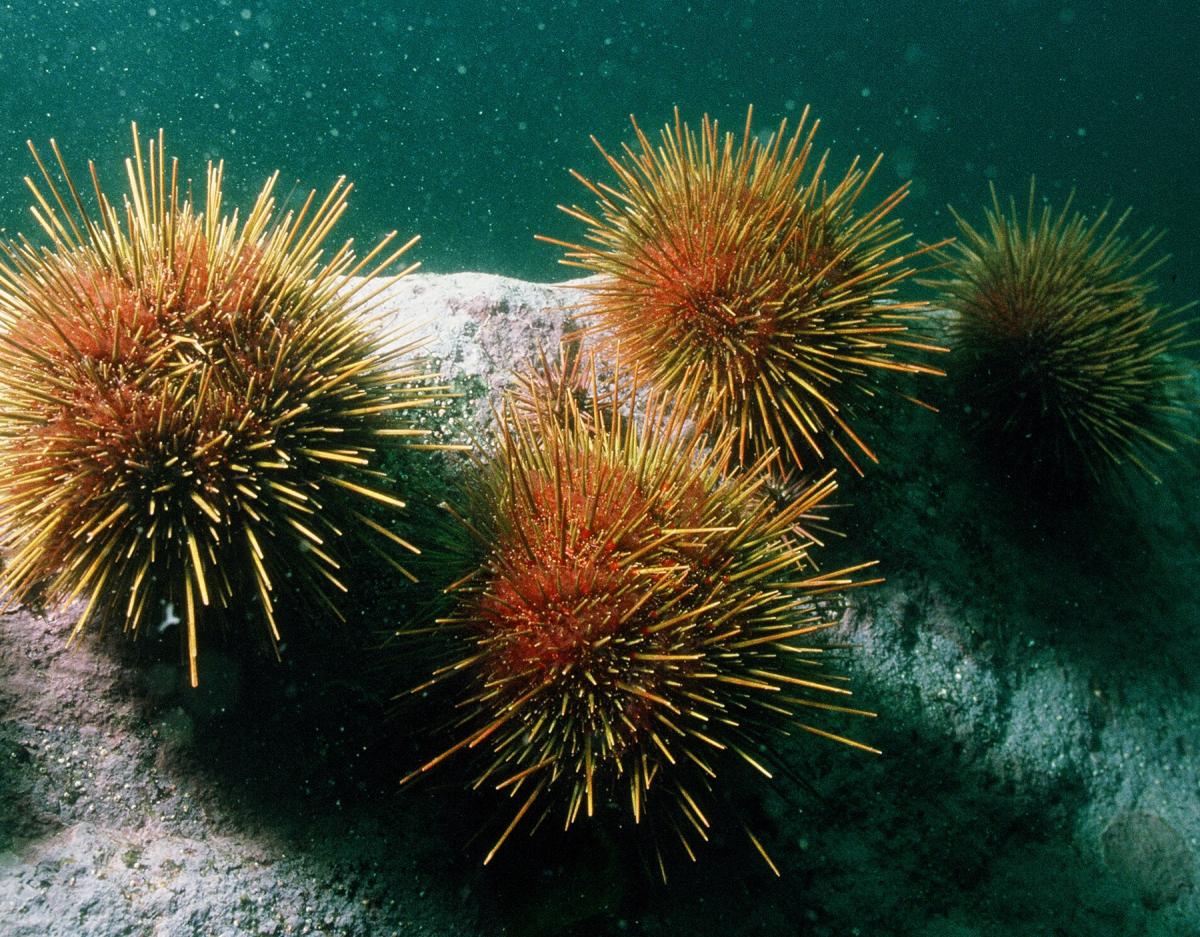 However, there are differences between populations and species. Those that are naturally exposed to changes in pH, like on the west coast of North America where seasonal upwelling occurs, may do better than those that aren’t. Experiments with west coast sea urchins showed that they don’t appear to be suffering similar impacts as other calcifiers. Dr. Tessa Hill of Bodega Bay Marine Lab says, “We saw no dramatic morphological difference in urchins raised under higher CO2 concentrations.” Hill and colleagues think that the urchin’s “genetic toolkit” evolved in an environment where upwelling can suddenly lower pH, may serve it well in acidified future seas.

Scientists believe that climate change is causing an increase in seasonal winds that bring upwelling. The upwelling brings cold, nutrient rich waters to the surface, increasing food for the entire food web. For inhabitants of the deep sea, like, sea cucumber that means more food.

Researchers at the University of North Carolina found that: “Seven species (crabs, lobsters, shrimp, red and green calcifying algae, limpets and temperate urchins) showed a positive response, meaning they calcified at a higher rate and increased in mass under elevated CO2.” But “Ten types of organisms (including oysters, scallops, temperate corals and tube worms) had reduced calcification under elevated CO2, with several (hard and soft clams, conchs, periwinkles, whelks and tropical urchins) seeing their shells dissolve.”

“The impact on levels of carbon dioxide in the Earth's atmosphere by the decaying remains of a group of marine creatures that includes starfish and sea urchin has been significantly underestimated.” Calcifying organisms incorporate carbon directly from the seawater into their skeletons in the form of inorganic minerals such as calcium carbonate. This means that their bodies contain a substantial amount of inorganic carbon. When they die and sink much of the carbon becomes buried in sediments, where it remains locked up indefinitely.

Mario Lebrato and his colleagues provide the first estimation of the contributions of starfish, sea urchins, brittle stars, sea cucumbers and sea lilies -- all kinds of echinoderms -- to the calcium carbonate budget at the seabed. They estimate that the global production from all echinoderms is over a tenth (0.1) of a gigaton of carbon per year -- that is, more than a hundred thousand million kilograms.