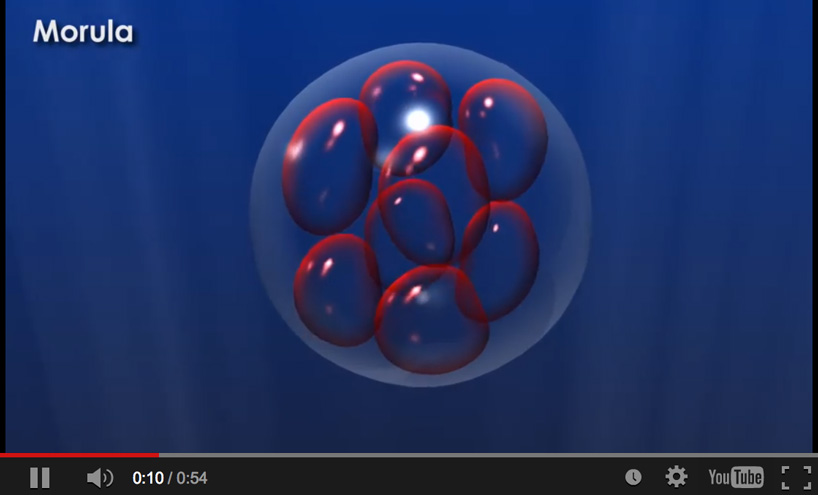 This animation shows the development of a sea star from a fertilized egg to the time it settles on the sea floor. 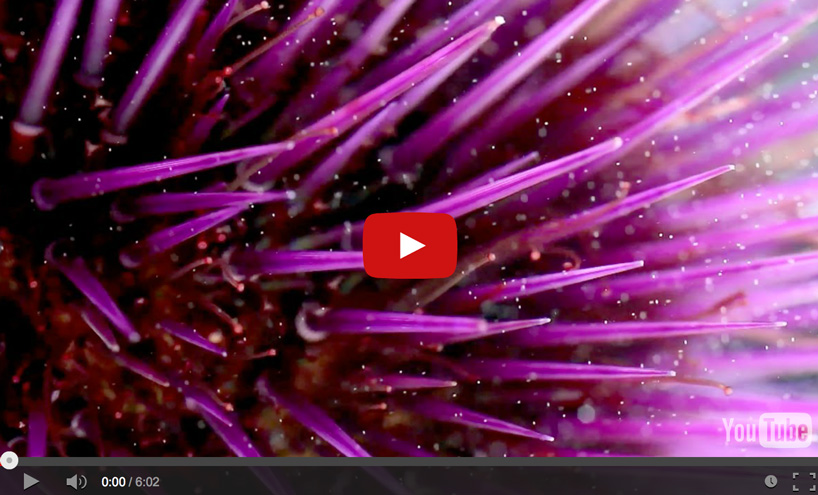 This video shows the life cycle of a sea urchin. This is about all types of larvae and sex and all types or reproduction  for highschool or marine bio class.

Sea stars use their tube feet to pry open their shellfish prey. In this video watch a limpet fight off a sea star. 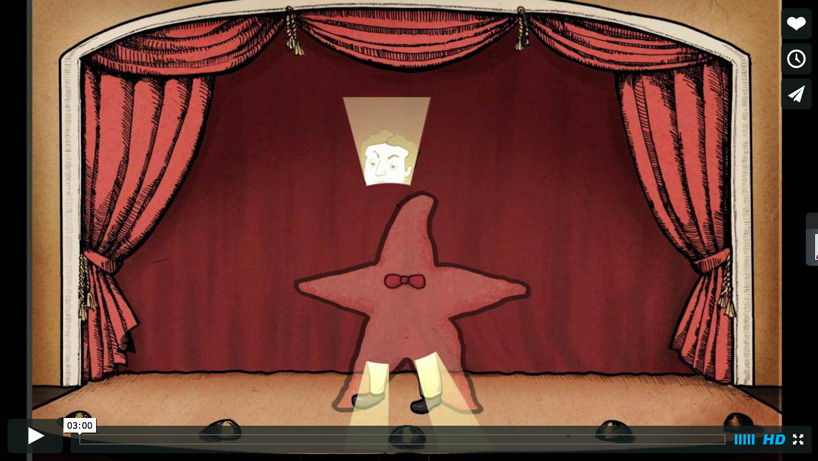 Echinoderms have the remarkable ability to, at will, make themselves really stiff and hard or make themselves very soft. This allows sea stars, for example to hold on tightly to rocks and then let go. Or for sea cucumbers to squeeze into a tight space when soft and then harden so they will stay there. How do they do this? Echinoderms have a specialized connective tissue packed with a special type of collagen, called catch collagen. This video shows, in a humorous way, how sea stars use their catch collagen. 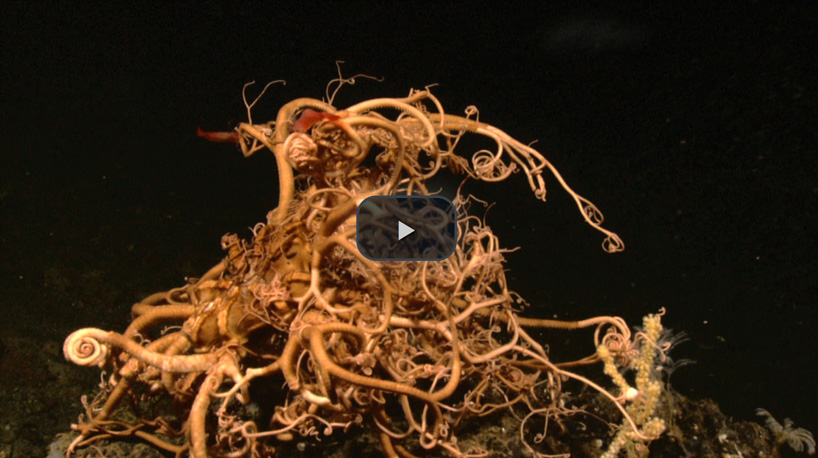 Basket stars are in the same family as brittle stars, the Ophiuroidae. They can get to be very large and have very highly branched arms that are even more flexible than those of brittle stars. Many live in the deep sea. Learn more. 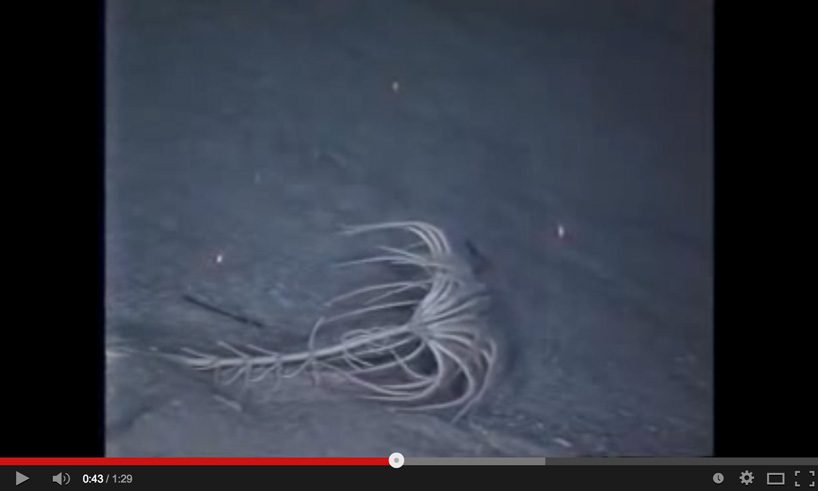 Crinoids, or sea lilies, are stalked echinoderms that live on the sea floor, looking a lot like plants. But they can move when threatened, as shown in this video taken from a submersible. 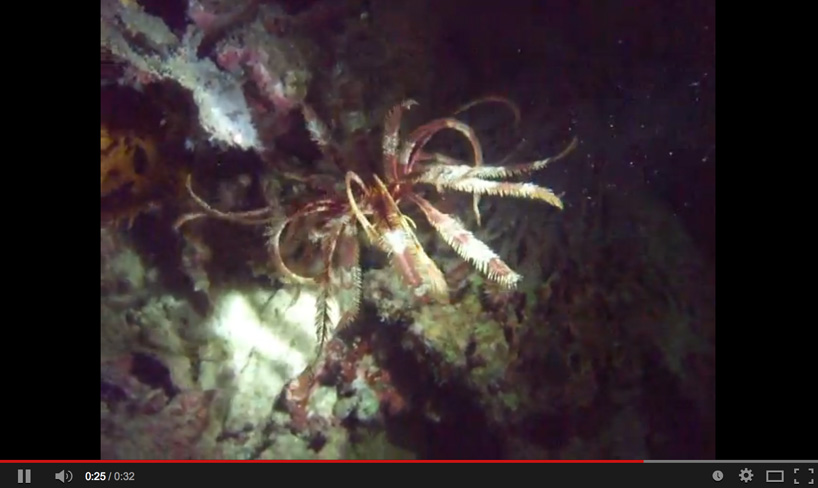 And this video shot by a diver. 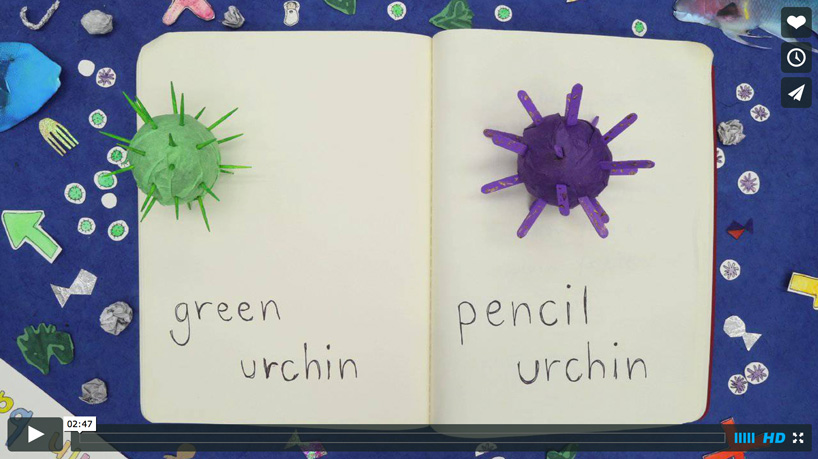 This article is all about sea cucumbers, their role in the ecosystem and their benefits to humans. 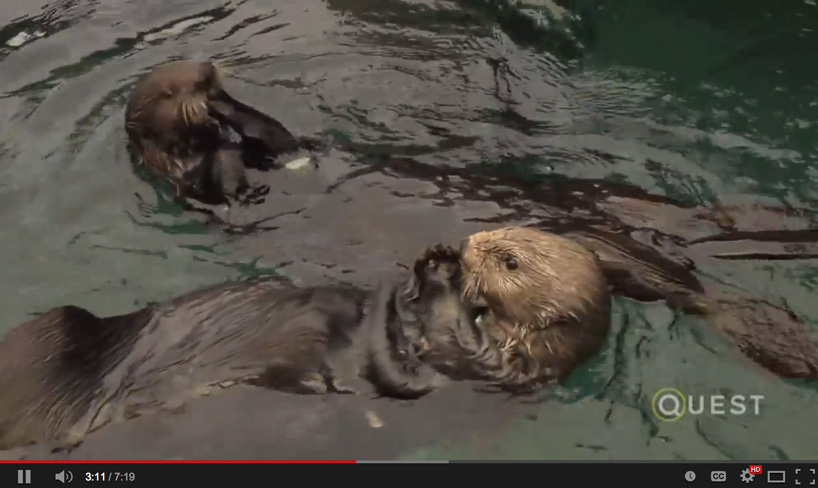 Sea urchins are a favorite food for sea otters. When otters are present, kelp forests thrive; when they aren’t, sea urchins munch away at kelp forests. And healthy kelp forests not only benefit the ecosystem but also sequester carbon, helping to fight climate change. Watch more on Quest from KQED. 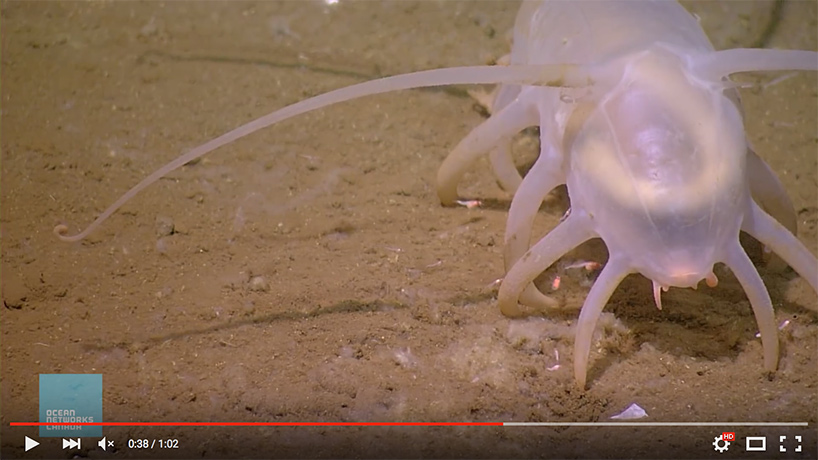 Learn more about the sea pig in this video. 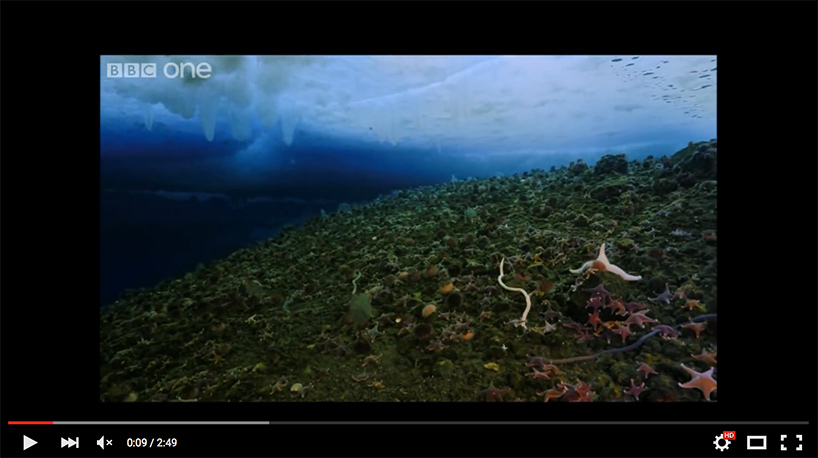 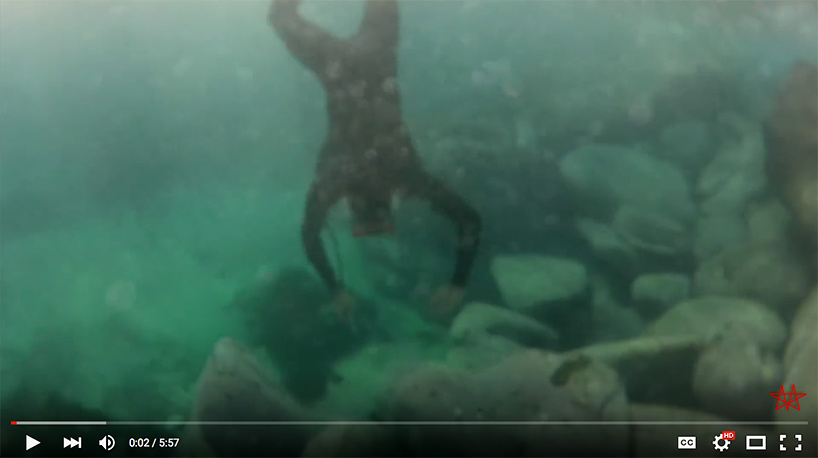 This video shows an army of sea urchins off the California coast grazing on giant kelp and also shows other echinoderm prey and predators. 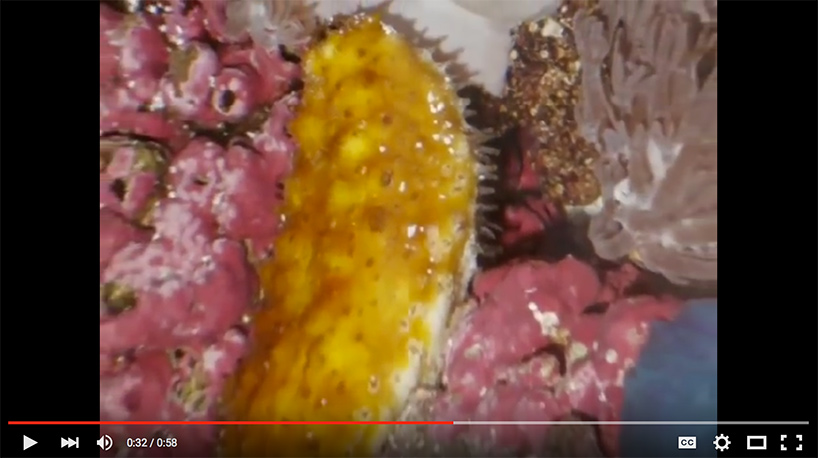 Scientist created a material that can change from soft plastic to hard, inspired by how cucumbers can change their bodies from soft to hard. Check it out in this video from Case Western Reserve University.

ECHINODERMS: GIVE ME FIVE An Ultimate Animal

More information about echinoderms. In the left hand column, click on the bottom link, “Ocean Animals.” Another column will appear immediately to the right. Click on echinoderms. Unfortunately there is no direct link to this page.

One of the defining characteristics of echinoderms is their unique water vascular system. This reading describes how the system works and has an advanced discussion of its possible evolution.

Read about the main characteristics of echinoderms.

There are many types of echinoderms; this article is a good summary.

This chapter has good information and images of echinoderms: "Invertebrates - Multi-celled Animals: Echinoderms".

Sea stars have defenses just like all animals, but they’re hard for us to see. This article talks about various sea star defense mechanisms including: thick leathery bodies; spines on the underside; and production of large amounts of mucous.  (The “echinoblog” has lots of articles about echinoderms).

Discover how sea stars can regenerate arms in this article from UCSB Science Line.

Learn more about a sea cucumbers at he National Ocean Service website from NOAA  and from the Marine Education Society of Australasia.

Read about sea cucumbers: "The Importance of Being Honest: The Sea Cucumber Spills All".

This article is all about sea cucumbers, including their role in the ecosystem and benefits to humans.

From the Monterey Bay Aquarium Research Institute, about a deep sea cucumber called a sea pig.

Brittle stars are the largest group of sea stars. They live in both shallow and deep waters and sometimes carpet the sea floor. Learn more on The Echinoblog. Also check out additional information: Brittle Stars are Everywhere: 5 Extreme Ophiuroid Habitats!

A wide variety of pictures of echinoderms from the University of Michigan Animal Diversity Web.

A Tisket, A Tasket, Now You Found a Basket STAR!

There is a disease taking its toll on sea stars on the west coast of North America, called sea star wasting syndrome. It’s affecting sea stars in tidepools and in subtidal areas. The sea stars’ bodies disintegrate and they lose part of their arms—hence the name: “wasting syndrome.” Scientists have found evidence for a link between a densovirus and sea star wasting syndrome, but there is still much work to be done before this mysterious disease is fully understood. Scientists think that sea stars are made more vulnerable to the disease because ocean waters are warming, stressing the sea stars. Read about the disease here from the University of CA Santa Cruz: "Pacific Rocky Intertidal Monitoring: Trends and Synthesis". And from the Cornell Chronicle: "New virus causes devastating sea star wasting disease".

And an article from National Geographic: "Starfish Are Still Dying, But Here's Reason for Hope".

Update from Oregon State University: Sea star juveniles abundant, but recovery is anything but guaranteed

Lack of sea stars revealed their role in the ecosystem: How an Epidemic Exposed the Ecological Importance of Sea Stars

Scientists have discovered the role of microbes in the syndrome: Microbe Communities Play an Important Role in Sea Star Wasting Disease

Some good news on this disease and why some creatures survived it: Sea Stars Started Dissolving. What Helped Some of Them Survive?

You can be a Citizen Scientist by recording your observations of sea stars with the syndrome here: UCSC Pacific Rocky Intertidal Monitoring: Trends and Synthesis website.

Here is a map showing the progress of the wasting disease on the west coast.

As part of the effort to understand the disease and its effects, scientists are asking that the Citizen Science project now include identifying the juvenile sea stars they see.

What are echinoderms good for? A lot. From the Echinoblog.

Read about echinoderms’ role in the environment.

Sea cucumbers play an important role as recyclers in the marine environment. Now scientists think that they may play a protective role in coral reefs threatened by climate change.

Learn about the interaction among sea otter, urchins and kelp.

Sometimes sea urchins dominate the ecosystem; when that happens it’s called an urchin barrens. This has happened in Monterey Bay.

Ecologists consider some sea stars affected by the wasting syndrome (the sunflower and ochre stars) to be keystone species because they have a disproportionately large influence on other species in their ecosystem. “The long-term monitoring of the wasting syndrome, including population estimates prior to the syndrome, in combination with biodiversity surveys, will allow scientists to interpret changes to communities that might result from severe population declines of the ochre star. The information will also be used to document recovery of both sea star populations and the community affected by the loss of sea stars.” Read more.

Scientists at UC Santa Cruz are looking at the effect of sea star wasting disease on the ecology of the communities where they live on the Pacific coast.

Sea cucumber poop is very important to several ecosystems. Read about it in The Echinoblog.

Watch this video about the role of sea stars in the ecosystem.

Read the whole manuscript: "The influence of echinoderms on coral-reef communities" by Charles Birkeland.

The Role of Echinoderms in Coral Reef Communities.

Sea cucumbers are a tasty delicacy in some cuisines; informally named as “bêche-de-mer,” or “gamat,” they have long been used for food and folk medicine in the communities of Asia and Middle East. And some Pacific Islanders use the toxin in some species as a poison to help them catch fish. They also use the sticky parts of some species to help stem the flow of blood if someone is wounded. More information from the Encyclopedia of Life.

Scientists created a material that can change from soft plastic to hard, inspired by how cucumbers can change their bodies from soft to hard. https://www.newscientist.com/article/dn13420-floppy-when-wet-sea-cucumber-inspires-new-plastic/

Ocean acidification can affect individual marine organisms along the Pacific coast, by changing the chemistry of the seawater. This UC Davis website has more information.

Echinoderm are especially sensitive to ocean acidification. They can’t make their their skeletons of calcium carbonate plates and spines if the ocean is too acidic. Read more about the Threat of Ocean Acidification to Echinoderms in the Premiere Undergraduate Science Journal: Journal of Young Investigators.

There are lots of echinoderms in the Antarctic and they will be impacted by ocean acidification. Read more in the article: "Antarctic Echinoderms:Canary in a Coal Mine for Ocean Acidification?"

Crinoids, called sea lilies, are stalked echinoderms that live on the bottom of the ocean, mostly in deep water. Their lineage is an ancient one arising in the Cambrian (540-480 million years ago); they once were the most abundant echinoderm but all but one genus perished in the Permian/Triassic extinction 250 million years ago. Read about crinoid fossils and see pictures at the Crawfordsville Crinoid Treasure Trove.

Shrimp Living on a Sea Cucumber