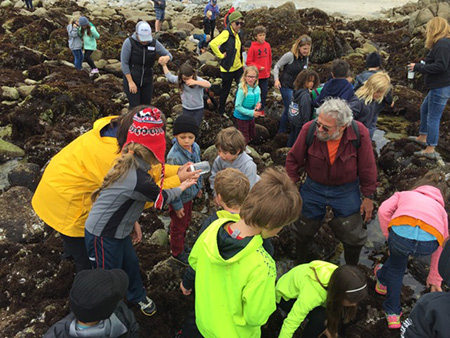 Dr. John Pearse has spent a lifetime studying the reproductive biology and ecology of sea stars and sea urchins. His doctoral work involved exploring the biology of marine invertebrates in the Antarctic, where he overwintered in 1961 then returned with his own students repeatedly in the 1980s. They found that the abundant and ecologically important Antarctic cushion star spawns in mid-winter to produce long-lived pelagic larvae that feed on bacteria and phytoplankton in the summer. Dr. Pearse has also conducted research in the Red Sea and tropical Pacific.

For most of his career, Dr. Pearse has worked along the central California coast where he discovered that common sea stars and sea urchins use day length to regulate their reproductive activities. This assures that they spawn in winter and spring preceding the spring phytoplankton bloom on which their larvae feed. His long-time research found that some species produce young every few years, followed by long periods with no new juveniles. Also, that mass mortalities due to disease have repeatedly decimated populations of sea stars and sea urchins.

Dr. Pearse and his students have worked extensively on the rocky intertidal coast and within extraordinarily rich and diverse kelp forests, observing dynamic changes over more than 40 years. Populations of ochre sea stars have fluctuated, but have generally declined due to predation from sea otters, gulls, and most recently, disease. After spending most of his career at the University of California, Santa Cruz, he is now a professor emeritus and enjoys sharing his passion with high school students who monitor these changes in the intertidal through the LiMPETS program.