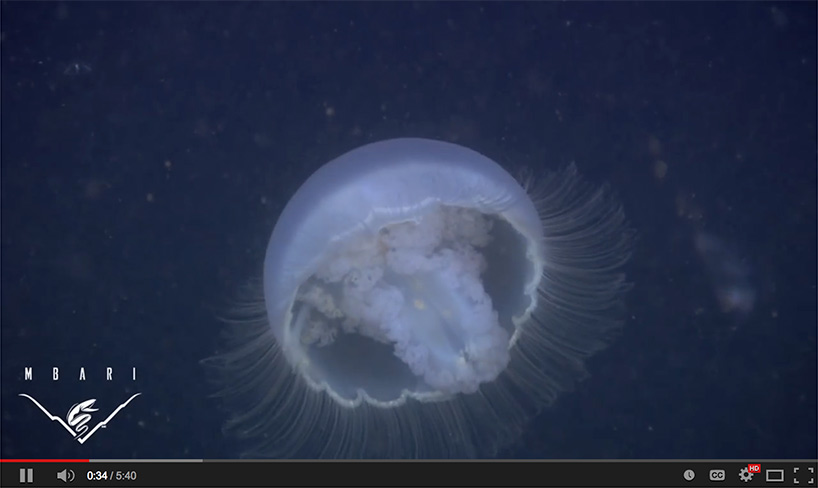 What exactly is a jellyfish? They aren’t fish at all. What most people call a jellyfish is really a gelatinous creature called a medusa in the phylum cnidarian. A scientist at the Monterey Bay Aquarium Research Institute explains why “There’s no such thing as a jellyfish.” 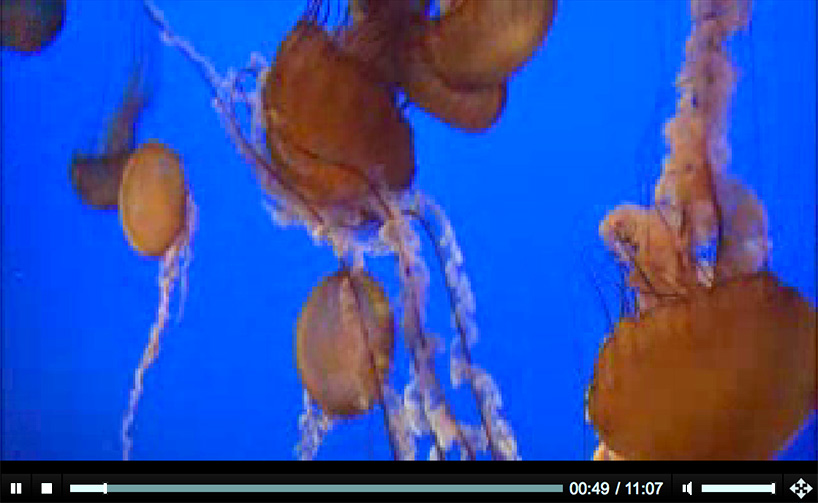 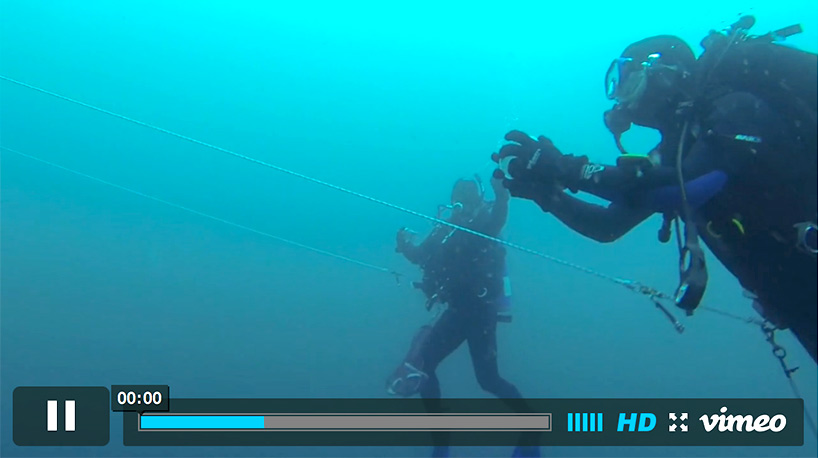 In this music video we join Steve Haddock to collect siphonophores with blue water SCUBA and with a remotely operated underwater vehicle. Watch more on this video from Creature Cast. 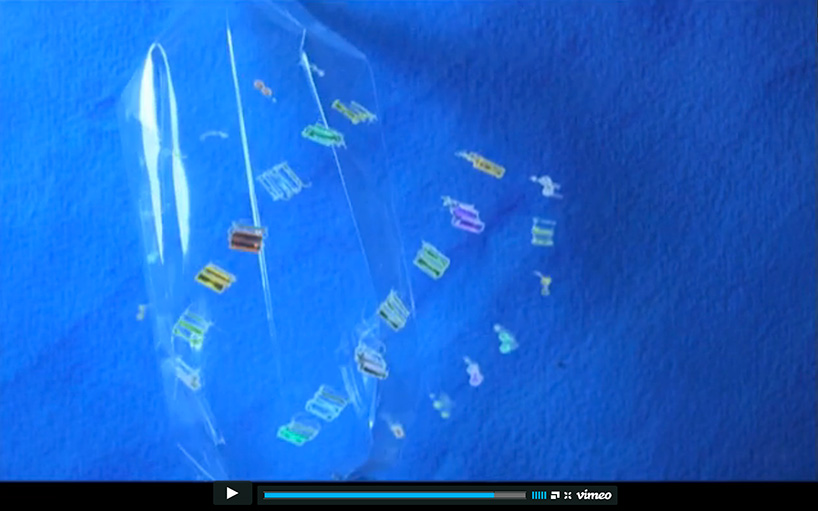 In the midwater zone of the ocean many animals, including jellies, are transparent. Being transparent, and therefore invisible to predators, isn’t easy, as explained and illustrated in this animation. 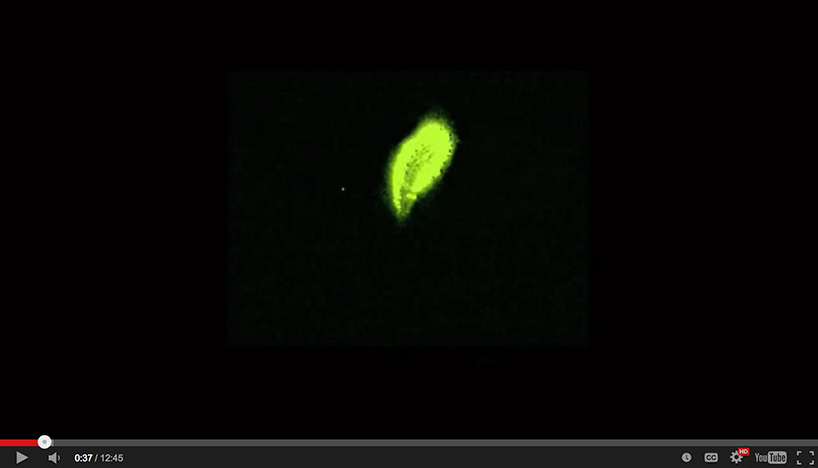 In the deep sea many animals, including jellies, are bioluminescent. In this TED Talk marine biologist Edith Widder shares her enthusiasm for The Weird Wonderful World of Bioluminescence. 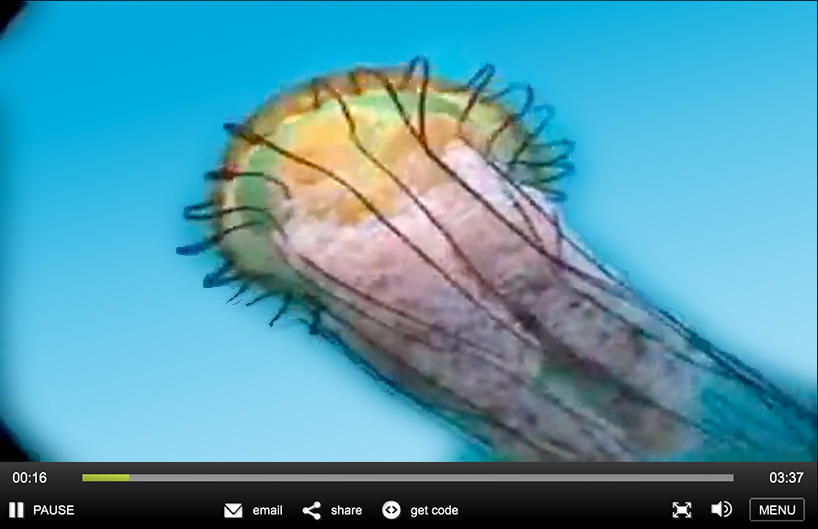 Jellyfish Blooms: Some researchers have suggested that jelly populations are increasing because of global warming and other human-caused activities. Watch this video on jellyfish swarming provided by the National Science Foundation. 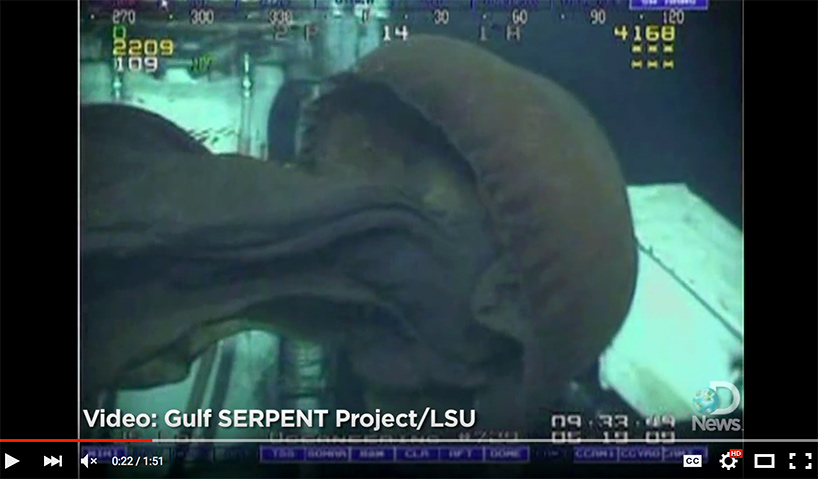 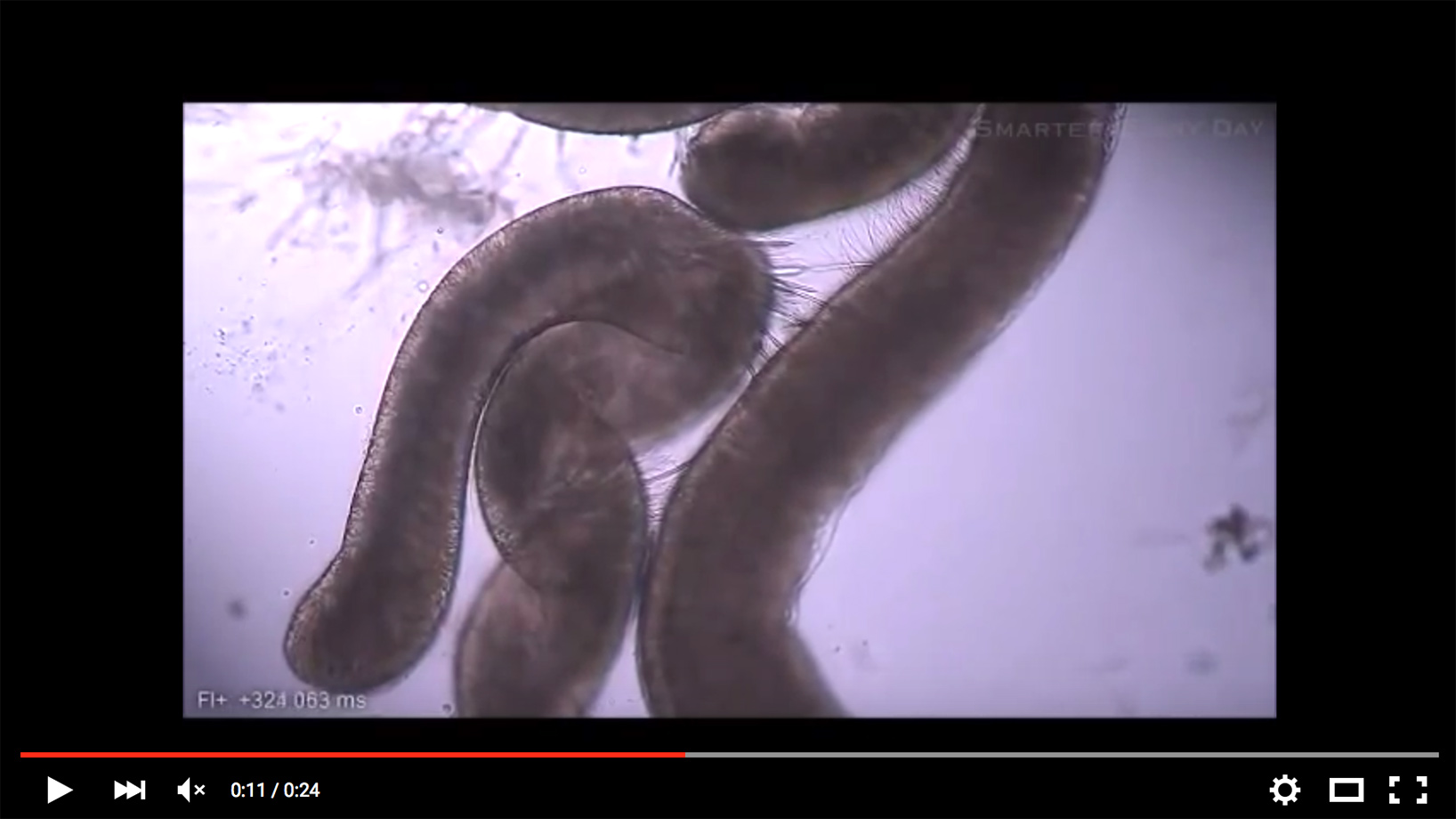 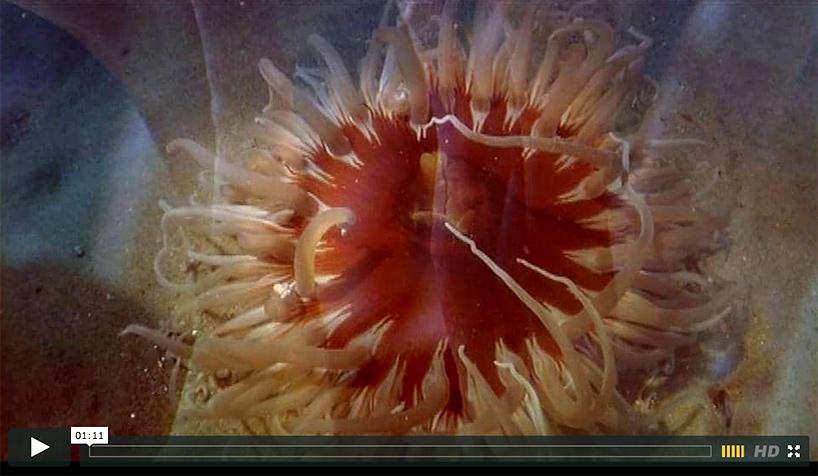 Watch a Shape of Life video animation of nematocysts firing. 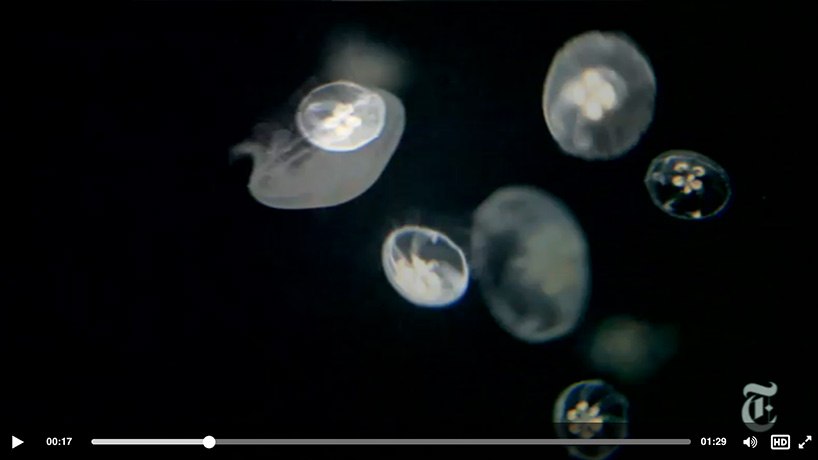 From the New York Times ScienceTake: The Jellyfish Engine, Jellyfish save energy when they pulse to move. If you go to the Shape of  Life video 'Jack Costello: Why Jellyfish Swim,' you will learn more about jellyfish swimming dynamics. 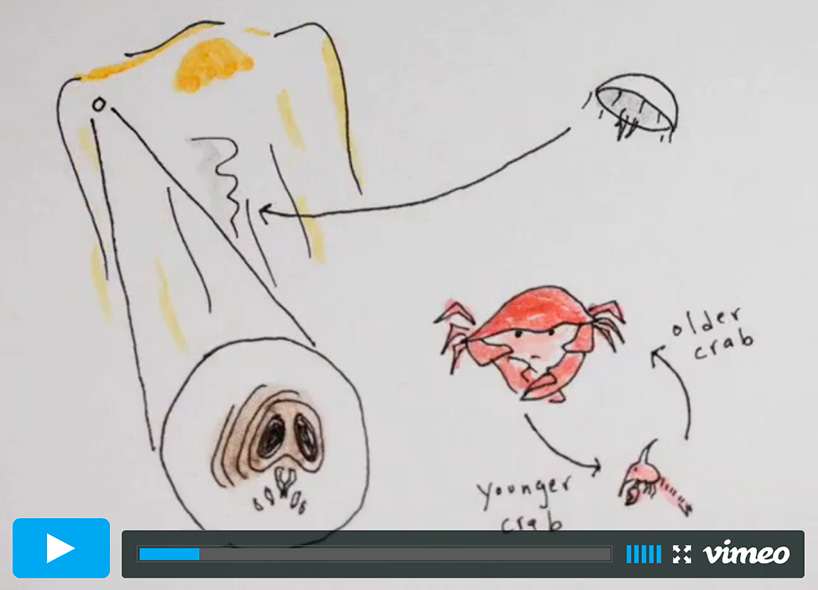 “Jellyfish have relationships with living things of all sizes, from fish and shrimp that feed off them or off the pieces of food left between their tentacles, to single-celled photosynthesizing organisms that take shelter inside the cytoplasm of the jellyfish’s cells.” From CreatureCast - Jellyfish Theater. 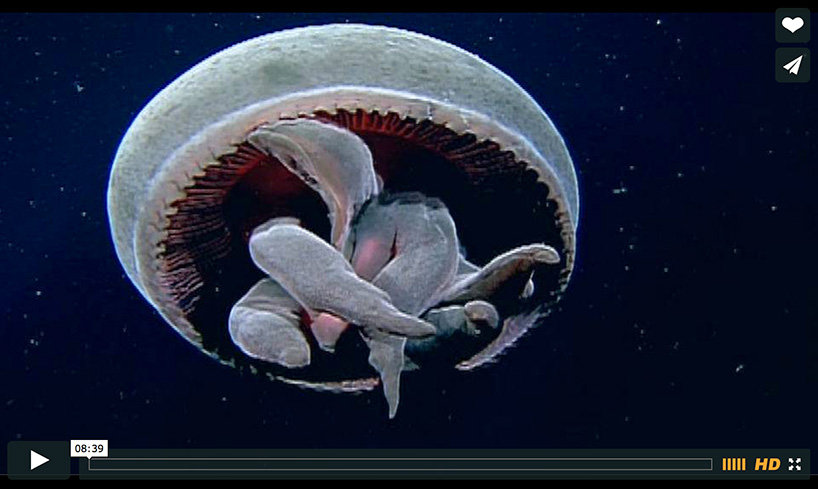 Watch the video on our site: Cnidarians: Deep Sea Research. 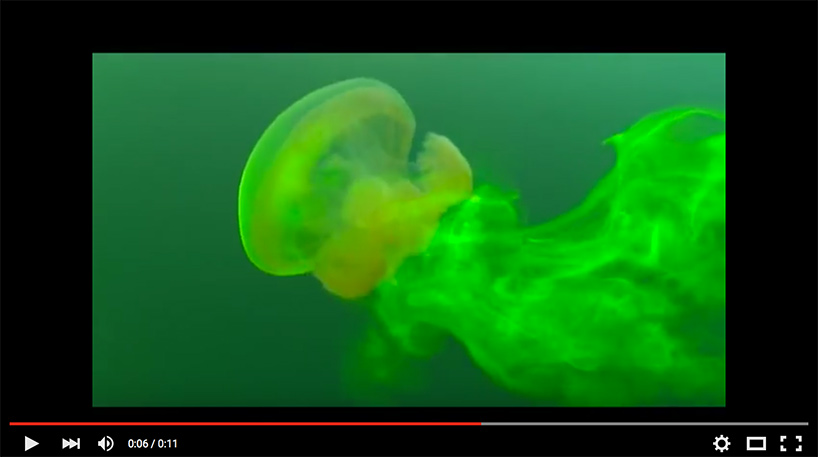 This video illustrates the mixing of water behind a jellyfish swimming using a dye injected into the water. 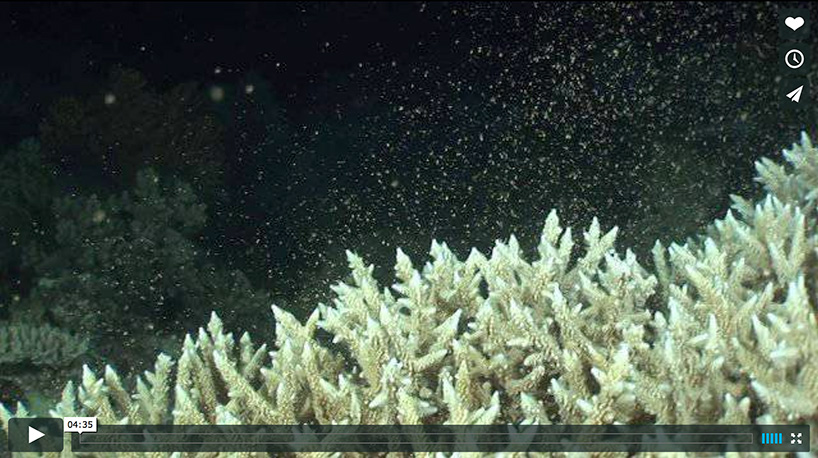 Corals on reefs all spawn in synchrony.  The night of nights. Coral on Great Barrier Reef mass spawn on November 3rd and 4th 2012. Filmed by Stuart Ireland, Calypso Productions at Sunlover Cruises pontoon Moore reef. Corals on reefs all release their eggs and sperm in sychrony. This is a beautiful video set to music. 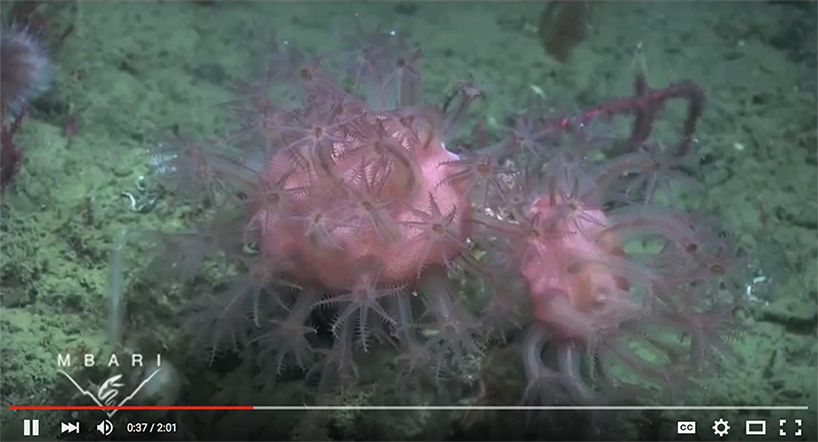 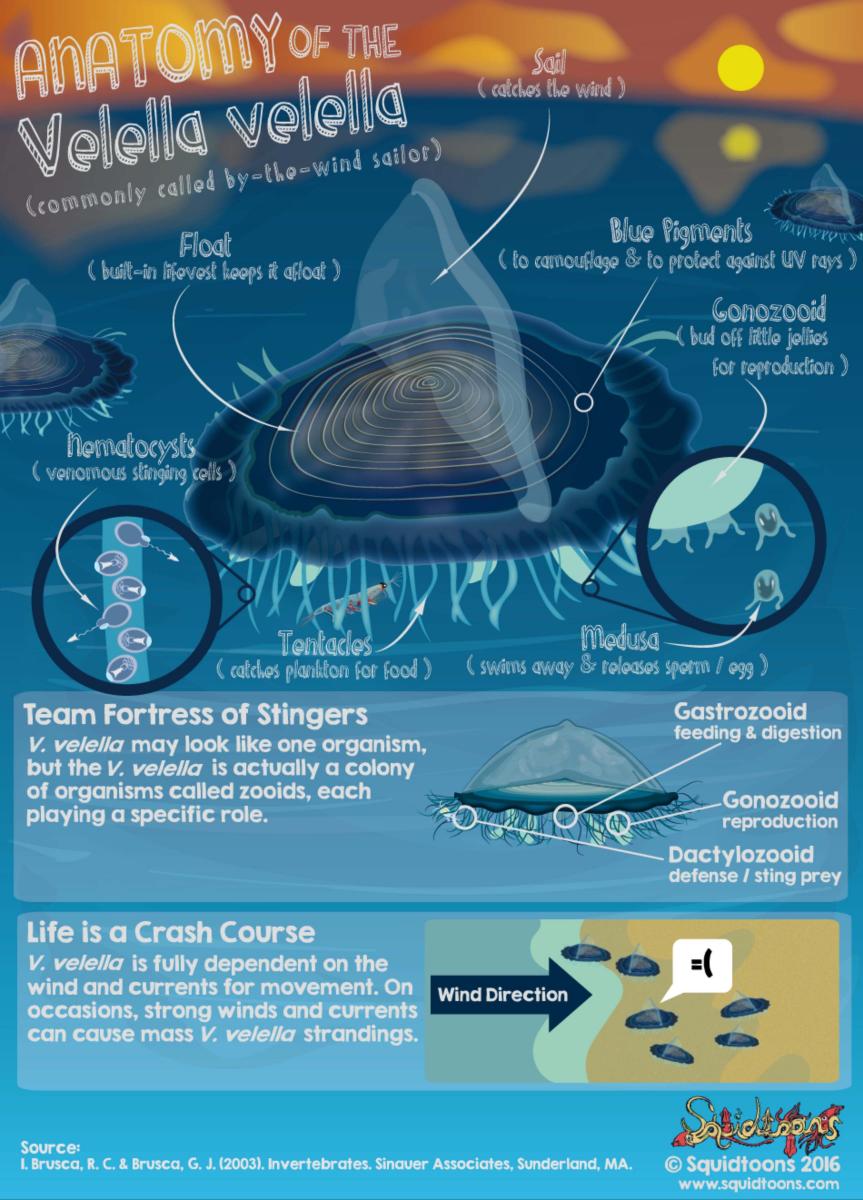 ANATOMY OF A CORAL POLYP 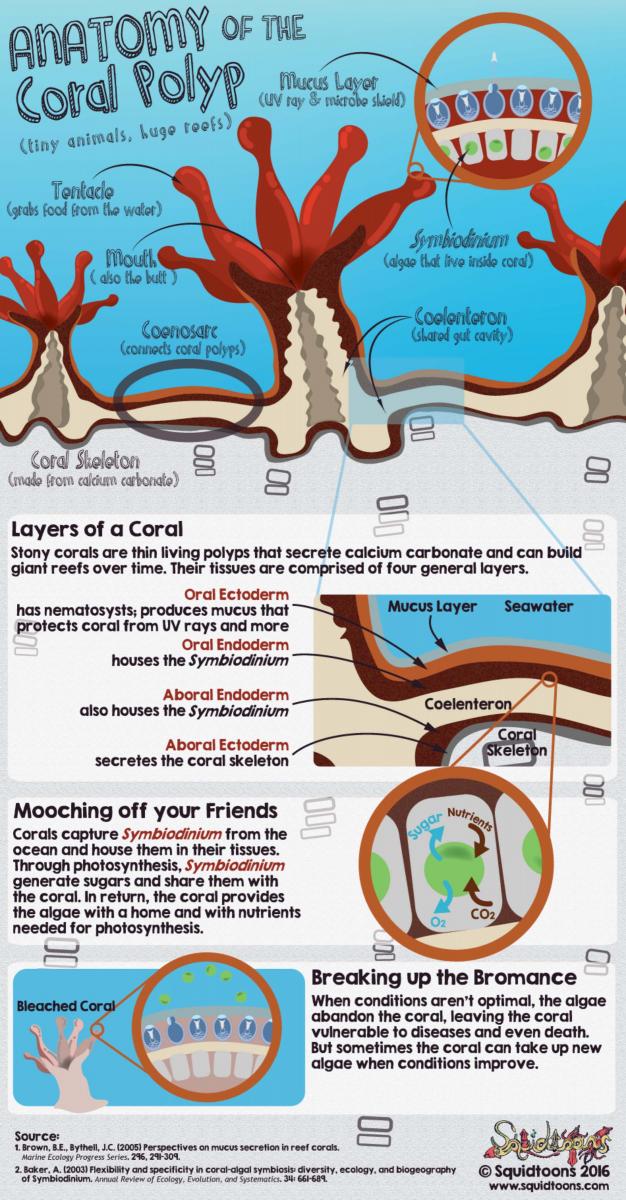 ANATOMY OF A MOON JELLY

THE POLYP AND THE MEDUSA Life on the Move

From Haiki Coastal Science and Societies Magazine, this is a good article about corals with photos.

Read about jet propulsion in a siphonophore in an article from the National Science Foundation: "Clues to future of undersea exploration may reside inside a jellyfish-like creature".

Read about the jellies of Palau in the National Science Foundation article Jellyfish: "Far From Passive Drifters-in-the-currents".

The ocean's smallest swimming animals, such as jellyfish, can have a huge impact on large-scale ocean mixing, researchers have discovered. Learn more from the National Science Foundation: "Researchers Link Jellyfish, Other Small Sea Creatures to Large-Scale Ocean Mixing".

Read about, and watch a video about, jellies and ocean mixing in the article: "I Heart Copepods. You should, too." from Scientific American.

Read about jellies and comb jellies in an article from the Smithsonian.

Cnidarians, including jellyfish, tentacles are packed with stinging cells called cnidocytes (the “c” is silent). These stinging cells shoot out a barbed shaft called a nematocyst to catch prey. The nematocyst can even inject toxins. Further information from "How Stuff Works: Do Jellyfish Have the Deadliest Venom in the World?"

More about nematocysts from Jellieszone.

Read about Siphonophores, a free-swimming colony of clones at siphonophores.org.

Chart about which animals are bioluminescent and how they use it from The Bioluminescence Web Page.

Being transparent comes with some obvious benefits - and some hidden costs. Read more in this article from the New York Times Science Section: "A Marine Magician’s Vanishing Act".

Sea anemones are part animal, part plant at the genetic level. “Evolutionary and developmental biologists have discovered that sea anemones display a genomic landscape with a complexity of regulatory elements similar to that of fruit flies or other animal model systems. This suggests that this principle of gene regulation is already 600 million years old and dates back to the common ancestor of human, fly and sea anemone.” At the same time, sea anemones are more similar to plants than vertebrates or insects in the regulation of genes at the RNA level, between the first step of gene expression and the creation of proteins. This process probably dates back to the common ancestor of animals and plants. From Science Daily: "Sea anemone is genetically half animal, half plant".

The aggregating anemones is one of the most common anemones found along the central coast of California. Here is a short article on this subject from the Monterey Bay Aquarium. Watch our video: "Cnidarians: Anemones Fight".

From Animal Diversity Web. Read all about the giant green anemone. Everything you want to know about this solitary and aggressively territorial creature.

ABOUT CORALS AND CORAL REEFS

Reef-building corals have a symbiotic relationship with algae called zooxanthallae. Inside each polyp live plant-like cells called zooxanthellae that produce food from sunlight, supplying energy to the coral. In turn, the coral polyp supplies the zooxanthellae with nutrients from the ocean and shelter. Read about Symbiotic Algae from NOAA Coral Reef Conservation Program.

Read about coral reefs and watch a video of some of the animals on a reef.

Reef building corals aren’t the only kind of corals: there are deep-sea corals found throughout the world. They can live in very deep, cold waters without sunlight to nourish them. Instead, they trap small particles passing by. Deep-sea corals may live for centuries, making them and the myriad species that depend on them extremely slow to recover from disturbance. Read more about them here and here.

Monterey Bay Aquarium Research Institute says, "People have been talking about jelly blooms increasing around the world, but we don't really have a lot of data on this. So it's hard to know how localized these events are. That's why we created jellywatch.org. The idea is that everyday people can get involved in a real ocean research project. Their eyes are important instruments in this study."

JELLIES ROLE IN THE ECOSYSTEM

When there’s a large bloom of jellies and all those animals eventually die, they fall to the seafloor in the deep sea. All these jellies provide food for scavengers like crabs and hagfish. Read the article: "Importance of jellyfish falls to deep-sea ecosystem revealed" from the University of Hawai'i News.

More about the impact of jelly blooms. From environment360: "Massive Outbreak of Jellyfish Could Spell Trouble for Fisheries".

Gelatinous animals play a key role in the Arctic food web. Here’s a lesson plan for high school about that from NOAA.

Jellies are prey for many animals, including sea turtles, and their dangling tentacles provide homes for many creatures. Read about the role jellies paly and what happens when there are jelly blooms. Read an article from the National Science Foundation.

Jellies play a role in the mixing of ocean waters: one researcher said: "Biomixing may be a form of 'ecosystem engineering' by jellyfish, and a major contributor to carbon sequestration.” Read more in the article: "Jellyfish: Far From Passive Drifters-in-the-currents". And this article explains and shows the turbulence around a jellyfish.

JELLYFISH BLOOMS: ARE THEY HAPPENING? A CONTROVERSY

State of the Planet, Blogs from the Earth Institute has an interesting article on jellyfish swarms: "Giant Jellyfish Swarms – Are Humans the Cause?"

Researchers who reviewed reports of jellyfish population increases found there isn’t evidence to support the idea that their populations are on the rise. Read more in this article from the New York Times: "Evidence for Jellyfish Invasion is Lacking".

ANEMONES ROLE IN THE ECOSYSTEM

Anemones play many roles in the ecosystems where they live. In the temperate intertidal, they are opportunistic predators. Some anemones, like Anthopleura xanthogrammica, (giant green anemone) help shape the intertidal community by preying on sea urchins. And, when there are fewer urchins, there are more seaweeds in the environment. Under favorable conditions, some anemone species such as Anthopleura elegantissima (aggregating anemone) can reach up to 82% cover on rocks s and can reach densities of 500 individuals per meter. And, sea anemones may host multiple other marine organisms including crabs, gastropods, and fish.

Anemones provide homes for many kinds of animals; perhaps the most well known are clownfish also called anemone fish (remember Nemo?) on tropical reefs. This relationship is called mutualism where both organisms benefit from the relationship. The clownfish gets protection and the fish helps the anemone by chasing away potential predators. Scientists studied how the mutual relationship between clownfish and anemones helped clownfish spread on Indo-Pacific coral reefs.

On Caribbean reefs some anemones have a symbiotic relationship with crustaceans. These crustaceans have a long-term relationship with their anemone “landlord”. Anemones provide protection from predation to many crustaceans that acquire immunity from the toxic compounds produced by their hosts through a process known as acclimation (like that of the clownfish). The benefit to the anemone is that the waste material from the “tenants” help fertilize their zooxanthellae – the photosynthetic algae that live in the anemone’s tissues. The crustaceans most associated with anemones are shrimp and crab species. Sometimes groups of shrimp live in one anemone.  Their common name is anemone shrimp. Read more about how this might happen in your home aquarium, like it does in nature, and see photos.

Coral reefs are some of the most diverse and valuable ecosystems on Earth. Coral reefs support more species per unit area than any other marine environment, including about 4,000 species of fish, 800 species of hard corals and hundreds of other species.

Coral reefs play a significant role in the ecosystems where they thrive. Read about their role on the website Reef Relief.

Deep-sea corals provide structure and habitat for other animals in the areas of the ocean where they grow. 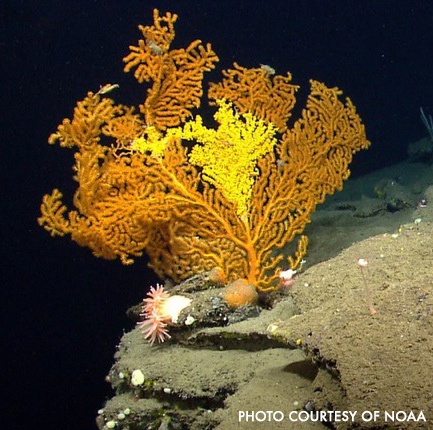 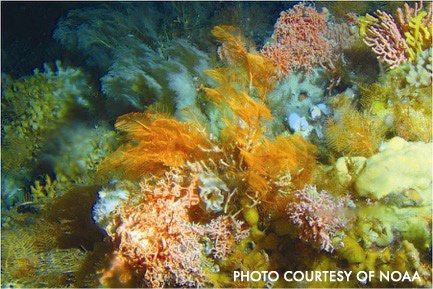 To see where bleaching events are occurring now: https://coralreefwatch.noaa.gov/satellite/bleaching5km/index_5km_baa_max_r07d.php

From the Science section of the New York Times an article about how some species of coral are adapting to warmer ocean temperatures.

The ocean has been taking up excess carbon dioxide in the atmosphere for decades. As the ocean absorbs more and more carbon dioxide, it’s chemistry is changing, becoming more acidic. A 20 percent increase above current carbon dioxide levels, which could occur within the next two decades, could significantly reduce the ability of corals to build their skeletons and some could become functionally extinct within this timeframe. From KQED's Quest: "Ocean Acidification: The Basics".

Many are deeply concerned about how ocean acidification will affect marine life. But if some organisms will be badly hit, the work of David Suggett and Jason Hall-Spencer suggests others will flourish. Read how anemones respond to increasing ocean acidification: From Planet Earth On-line, "Ocean Acidification - No Enemy to Anemones".

Fluorescent proteins are essential to biomedical studies because when inserted into the cells of living creatures, scientists can be study changes in the live organism as they happen. The first green fluorescent protein discovered was from a jelly and the Nobel Prize was awarded in 2008 to three researchers who isolated and developed its use. Read more at New Scientist.

Some anemones glow in the dark and some of them can switch that fluorescent light on and off. Read the article "Glowing Anemone Yields ‘Light Switch’ Protein" at New Scientist.

Almost everyone knows that coral reef ecosystems host a rich diversity of life. Read about the importance of coral reefs to people.