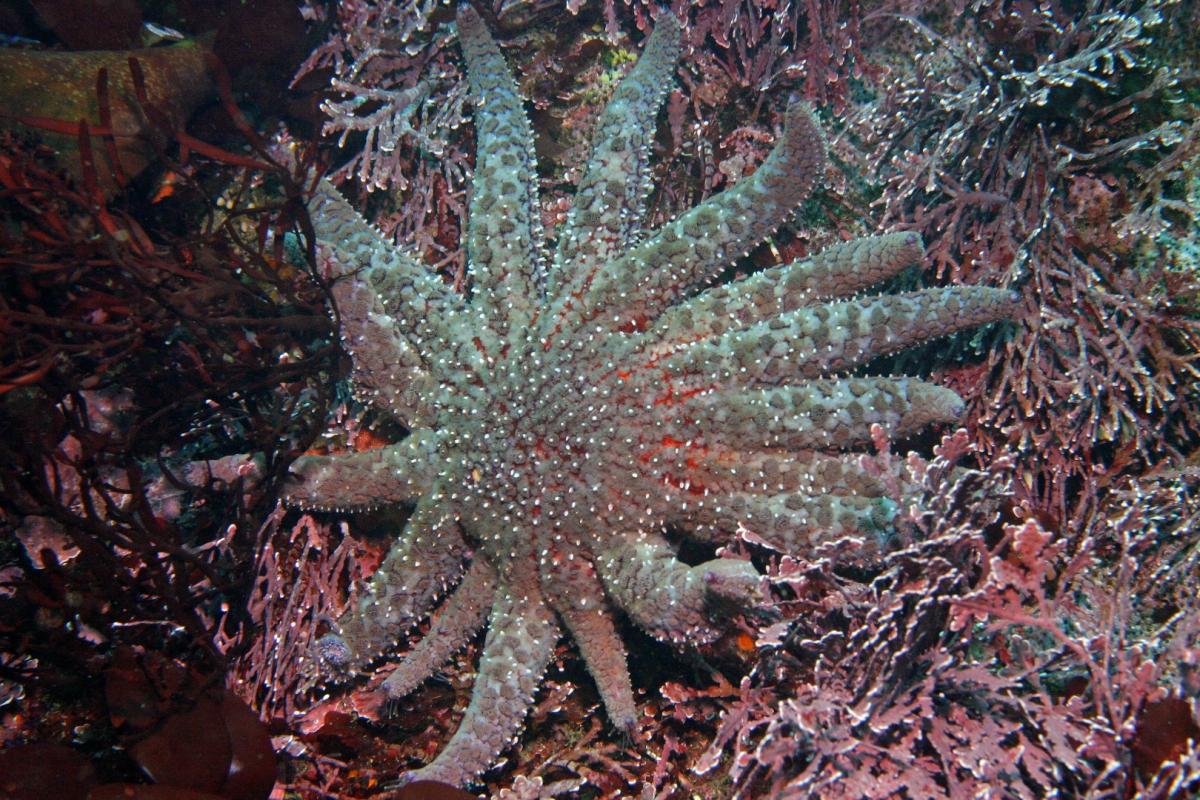 We’re thrilled when we see a magnificent sunflower sea star. The sunflower star, Pycnopodia helianthoides, may not be a “charismatic megafauna” like the most well-known apex predators. But, indeed, this large sea star is a powerful predator and the apex one in some of its world.

With its many arms — up to 26!— the sunflower star is impressive in both dexterity and speed. Its many arms mean a large number of tube feet – over 15,000! – to propel it. Sunflower stars can move very rapidly, at a rate of up to one meter per minute. It also has the largest body diameter of any sea star.

Sunflower stars live in the nearshore, from the low intertidal to 435 meters (1400 feet) on rocky, gravelly or sandy bottoms. They prey on herbivores, (like snails, sea urchins and bivalves), that consume kelp and other algae.

The role of a species like the sunflower star in an ecosystem varies geographically because of differences in the communities they occur in. Very few organisms feed on the sunflower star. They play more of an apex predator role along coastlines where sea otters no longer occur

In late 2013, sunflower stars and about 20 other sea star species were devastated by sea star wasting disease. Since 2015 very few sunflower stars have been seen along much of the west coast of the US and Mexico but are still found in Alaska.

The IUCN (International Union for Conservation of Nature) declared the sunflower stars Critically Endangered. As the IUCN states, “The decline of this predatory sea star species may have ecosystem-wide implications.” Sometimes the loss of an animal in an ecosystem helps scientists understand the role that animal played in that ecosystem. By studying those ecosystems where sunflower stars are no longer present, scientist learn what role the stars had when they were present.

The evidence in some places suggests that the loss of Pycnopodia can allow urchins populations to grow and overgraze kelp. Because kelp forest ecosystems provide habitat and food to so many organisms their loss would be devastating. In those kelp forests with sea otters eating urchins, the urchin population usually doesn’t get out of control. It’s all about balance.

Sadly, the sunflower star populations aren’t showing signs of recovery yet at the end of 2021. “The sheer magnitude of the continental-scale loss of this iconic animal and the cascading effects on kelp forest ecosystems is staggering. Billions of animals perished, and we still do not know the causative agents of the disease.”