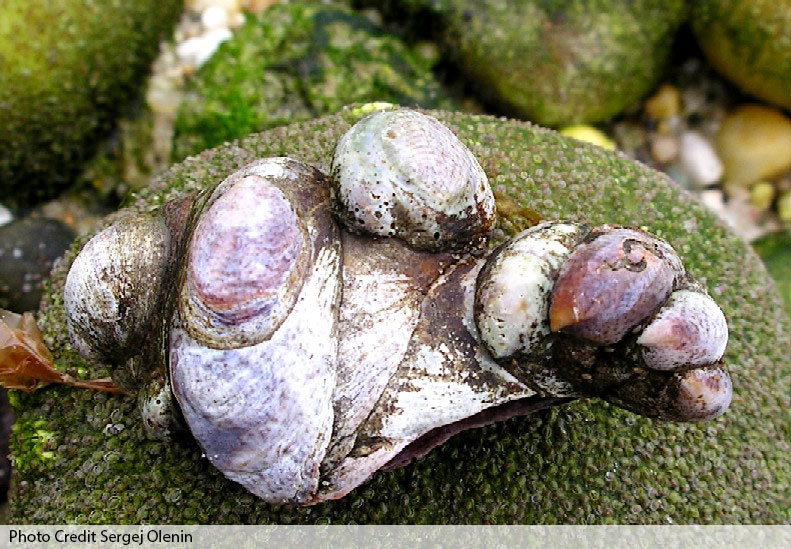 Slipper snails live in the intertidal where they attach to a rock or often the shell of another snail. Are these snails male or female, or first one then the other? The answer is yes to all those questions. Slipper snails start life as males and change to female. This strategy is called sequential hermaphroditism. These snails change sex when they reach a certain size, depending on the sexes of the other slipper snails around.

Several species of slipper snails form stacks of two or more, up to 10-12 individuals. The larger, older snails are female. Younger males settle on top of the females. As the males age, they will change to female. What’s the advantage of this strategy? Larger animals can produce more eggs so they are females. Small males can still produce plenty of sperm to fertilize the eggs. And sperm take much less energy to make than eggs. A researcher at the Smithsonian found that touching another slipper snail was also a key to changing sex.

Sequential hermaphroditism (sex change over time) occurs in many marine animals. Clownfish, wrasses, moray eels, and gobies, as well as some other marine snails, change sex. Researchers think, according to the size-advantage hypothesis, that sex change in these animals is favored by natural selection. If reproductive success increases more quickly with size in females (more eggs), but is independent of size in males (still produce a lot of sperm), then sex change from male to female is predicted.

So, the next time you’re out in a tidepool, look for a stack of Crepidula snails and think about which might be male, which female.