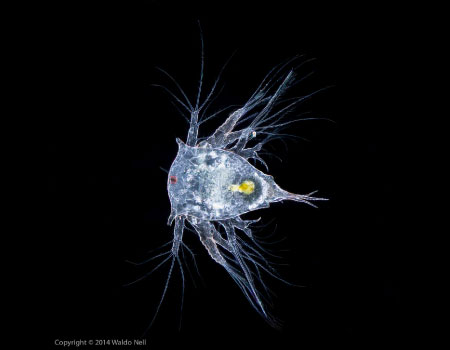 Crustaceans begin life as an egg and then go through a series of larval stages, molting several times, before reaching adulthood. The first larval stage for crabs, lobsters, shrimp, barnacles, copepods, and some other crustaceans is called a nauplius. The nauplii of different species all look alike so they are hard to tell apart. These larvae live in the water column as part of the zooplankton.

They’re stealthy little creatures in that they blend in with many zooplankton. Because of this, predators have a hard time seeing them.

Nauplii look especially otherworldly and do not resemble how they will look as adult crustaceans. Like other zooplankton, they have feathery appendages to keep them from sinking to the bottom. The feathers on their heads propel their swimming. Many nauplii don’t even have mouthparts, so they don’t eat. Unlike the adult, the nauplius is a Cyclops: it only has one eye. The nauplii change form several times, adding appendages and segments as they grow with each molt. 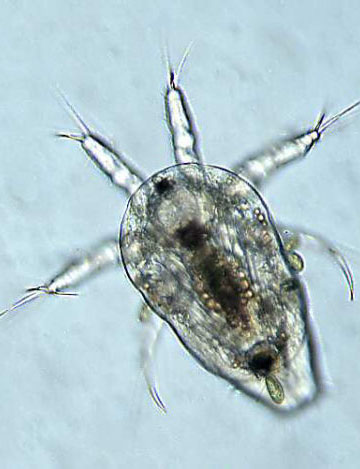 Many ocean explorers tow for Plankton. There’s a lot we can learn from plankton and the nauplii is no exception. Sometimes nauplii of various species have barnacles that are easy to identify as they have ‘horns’ that distinguish them. Nauplii are an important food source for fish and predatory invertebrates. Their health is essential to other marine life.

This is a fun drawing an animation of a barnacle nauplius.

Check this out if you want to learn more about the metamorphosis of larvae.