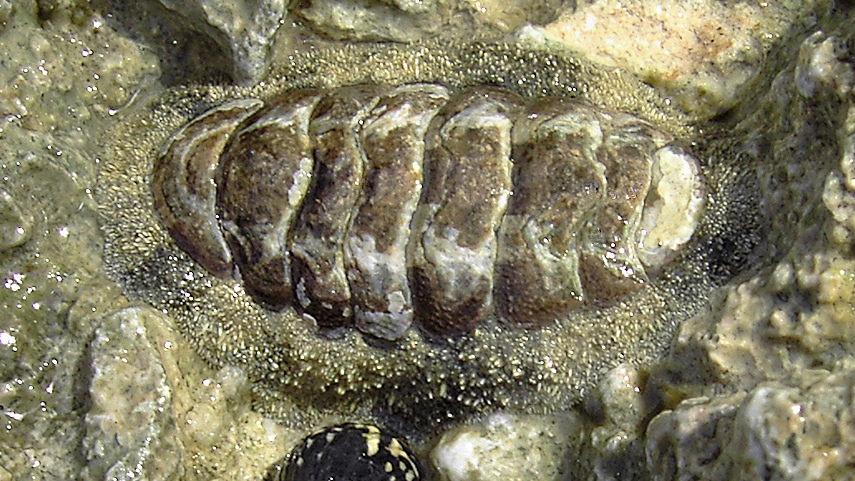 If you have ever looked at a chiton glued tightly to a rock, you might have wondered about its life. This well-armored creature’s body is covered by an overlapping eight-part shell (called shell valves), which protects its soft molluscan body.

Chitons do move and use their radulas, (a structure of tiny teeth), to graze in the intertidal on encrusting animals and algae. At low tide, or when disturbed, a chiton will clamp down tightly to a rock. Scientists discovered that chitons have a unique orientation mechanism whereby they find a ‘home’ and return to same spot on a rock when the tide is low.

The popular marine biology books we have on our shelves say chitons don’t have eyes but are sensitive to light. It was a surprise in 2011 when researchers discovered that one species, the West Indian fuzzy chiton (Acanthopleura granulate), has hundreds of tiny eye-like structures across and embedded into their shells. 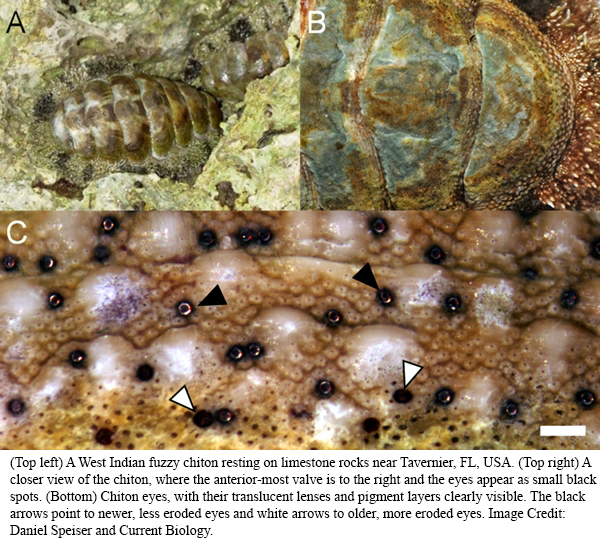 Dr. Daniel Speiser, University of South Carolina, says that “chiton eyes are unlike those of any other animal. Most eyes use protein-based lenses for focusing light, but the eyes of chitons form images using lenses of the mineral aragonite…” a form of calcium carbonate. This chiton’s armor evolved for both its strength and for image capture by its hundreds of lenses.

These “shell eyes” are low resolution and most likely used primarily to detect predators. Remember, chitons clamp down tightly when in danger. Dr. Julia Swigart, of Queen’s University of Belfast says, “The eyes are connected to nerves, so there is a signal from each individual eye that gives the chiton information about its environment. But there is no special visual lobe in the chiton brain that stitches all those signals together to give them an overall high resolution picture.”

Each lens forms two separate images at the same time. Why? A research team showed that the eyes are able to focus light and form images in both air and water. And having so many eyes ensures that this slow-moving animal can monitor its environment for threats in all directions. Scientists think when a number of these eyes in the same region or from all over the shell all give a signal of a shadow, that would trigger a response in the chiton.

Chitons are ancient creatures, first appearing about 500 million years ago. They are the only known group of molluscs living today to have living tissue integrated within the outermost layer of their shells. Researchers now know that there are only eight genera (and about 80 species) that have shell eyes. This is a small fraction of all chitons (there are about 1000 living species).

In an example of convergent evolution, this chiton’s eyes each contain a retina, a layer of screening pigment, and a lens, like other eyes in the animal kingdom.