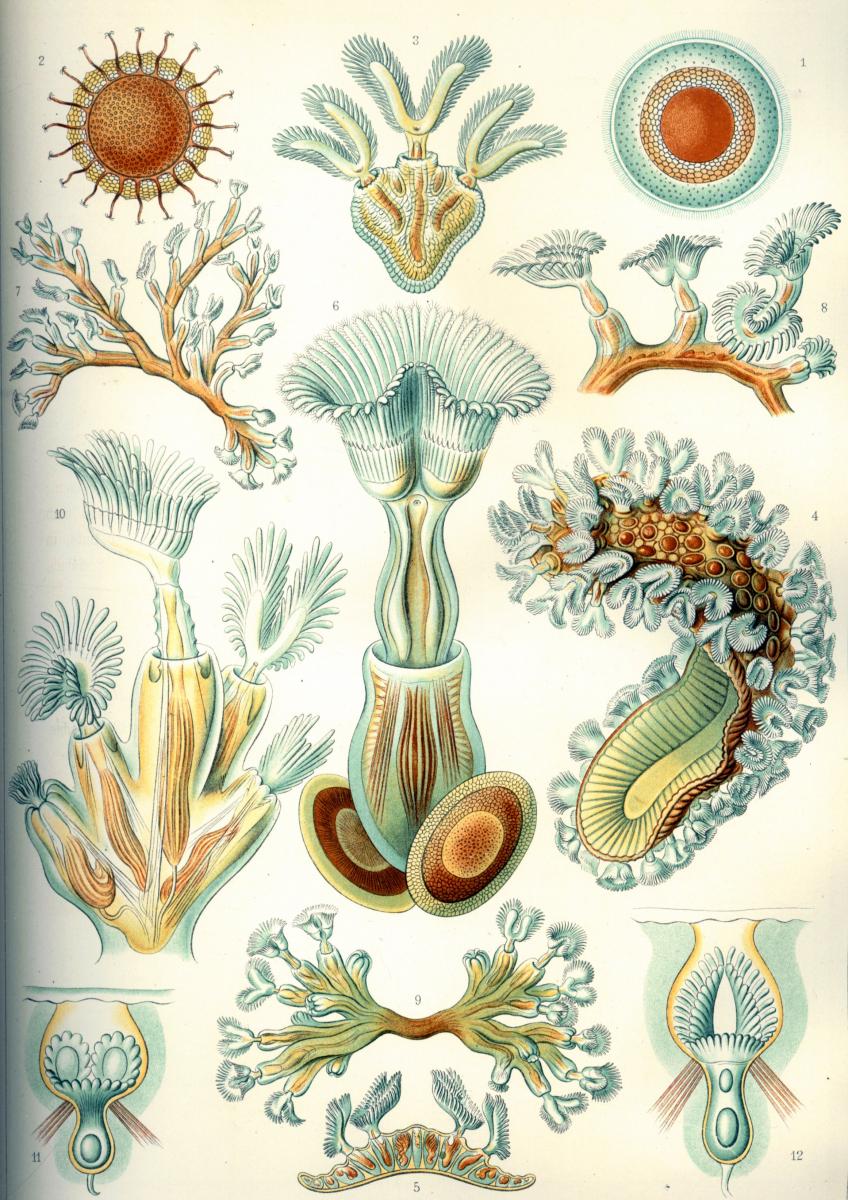 ​We’d like to introduce you to an animal we don’t explore much at Shape of Life: Bryozoans. Bryozoans, also known as Ectoprocta, and commonly referred to as moss animals (bryophytes are mosses) have been around since the Cambrian.

Most bryozoans are marine creatures, but one class lives in freshwater. These are small, sessile, colonial invertebrates that have calcium-based skeletons (like corals). Tens to many thousands of individuals, called zooids, may form one colony.

The zooids in a colony have different functions: some are the feeding zooids that filter food particles out of the water using a crown of tentacles – lined with cilia. Cilia carry food particles to the zooid’s mouth. They feed on microscopic organisms like diatoms and algae. Other zooids are defensive.

Reproduction is either sexual or asexual. Sperm from one colony fertilize eggs from another colony. Reproductive zooids brood the embryos inside shallow ovicells – specialized calcified brood chambers— attached to the zooid.

The larvae are released into the water column where they are free-swimming for only a few hours before settling to form a new colony. Reproduction can also be asexual by budding off to form new colonies with genetically identical zooids. 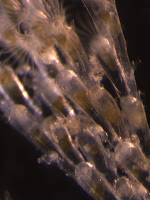 Most bryozoan colonies are attached to or encrust hard surfaces. Somecolonies cover rocky surfaces, shells and kelp blades. They can also be found on the underside of boats. Grazing fish, sea stars, nudibranchs, and sea urchins feed on bryozoans.

In the Antarctic there are forests and patch reefs of bryozoans covering large areas providing habitat for many other species. Bryozoan diversity in the Southern Ocean is estimated at more than 400 species. Since ocean warming and acidification are happening more rapidly in the Southern Ocean, these habitats are threatened. Bryozoans are especially impacted by ocean acidification because, just like corals, they build their honeycomb-shaped skeletons from calcium carbonate.

In warmer water, bryozoans skeletons form the basic structure of isolated small reefs known as patch reefs. They contribute to the formation of larger coral reefs that are fragile ecosystems  sensitive to both ocean warming and ocean acidification.

Bryozoans are also threatened in kelp forests off the Northern California coast. Researchers have found that warming waters plus ocean acidification are making the skeletons of bryozoans more likely to dissolve. When the ocean warms, the bryozoans build more magnesium into their skeletons, making them vulnerable to acidification.

Marine animals that don’t move much, or at all, produce compounds to defend themselves from being eaten. Scientists discovered one such compound produced by a common marine bryozoan has potent and broad anti-tumor activity. Particularly high concentrations are present in the larvae and juveniles, where they provide protection against fish predators. This compound has become the drug Bryostatin 1, used for treating some cancers. There are other Bryostatins being studied as potential drug to treat Alzheimer’s disease.