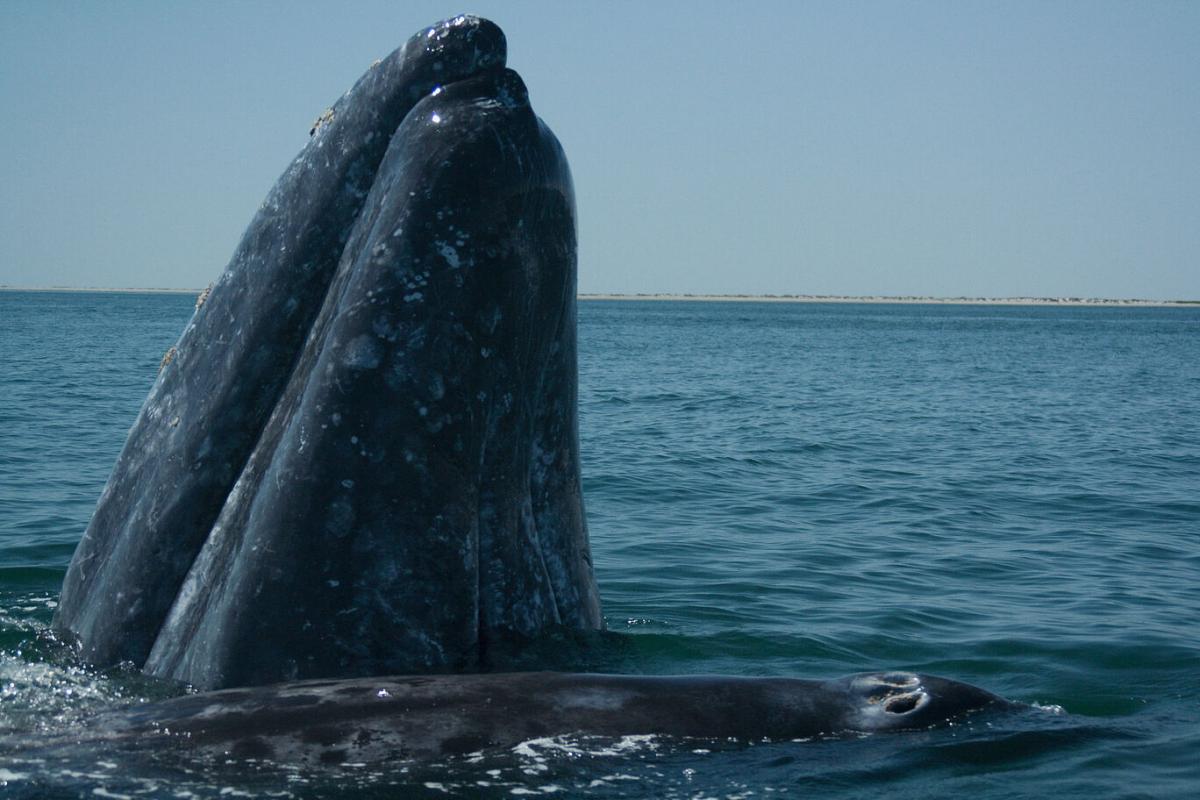 Each year gray whales make a long migration along the west coast of North America from the cold waters of the Arctic to the warm waters of the Baja lagoons and back, about 10,000 miles. They travel up to five miles per hour during the southbound migration. That’s the longest migration of any mammal. Why this long journey? The whales spend their summers feeding on rich food on the bottom in the Arctic and then travel to Baja to mate and give birth in several lagoons.

Gray whales are unusual in their feeding method. Whales feed on the bottom of the ocean. Like other baleen whales, they strain their food, but in their case it’s mud they’re straining to scoop-up mainly amphipods (small, shrimp-like animals), worms and other small invertebrates. Researchers can tell where the whales have been feasting by the pock-marks on the muddy ocean floor.

Once very numerous, the Eastern Pacific gray whales were listed by the U.S. as Endangered. Like other whales, they had been extensively hunted. After the species was protected by the Marine Mammal Protection Act in 1972, their numbers rebounded and the whale population was doing well. The whales came off the Endangered species list in 1994.

But in recent years—2016 to 2020 – many dead whales have washed ashore in what NOAA calls “an unusual mortality event.” The population declined by a quarter in those years. Could the problem be ship strikes, predation by orcas, or not enough food on their summer feeding grounds? NOAA is investigating why the whales are dying, but also notes that there was a similar event in 1999-2000 and the population did rebound after that.

If the scientists find that the cause is malnutrition, that means there’s trouble in the benthic habitat in the Arctic where the whales feed in the summer. The culprit is likely climate change which is causing a loss of sea ice in the Arctic. This reduces the population of amphipods, the whales’ favorite food.

A large population of algae grows on the underside of the sea ice. When that algae dies and falls to the sea floor, it becomes food for the amphipods. If there’s not enough algae falling to the bottom, the amphipods aren’t getting the nutrition they need. It’s possible that this decline in the nutrition and population of the amphipod prey makes the whales weaker and so more vulnerable to orca attacks and toxins in their environment.

Is There Enough Food to Go Around?

Whale scientists think it’s likely not one thing but several that are causing the decline of the gray whales. In addition to those possible reasons listed above, some scientists think the population has reached its “carrying capacity.” That means that there might not be enough food to go around for the large population of an estimated 27,000 in 2016. Now, as of the last count in 2019-2020, the population estimate is about 20,000.

Some gray whales have adapted to changes on their winter feeding grounds and are now “resident” of the Oregon coast. This group of about 200 whales are no longer making the long trip to the Arctic in the summer, but are feeding in shallow waters off the coast from Northern California to the central Oregon coast. These whales are referred to as the Pacific Coast Feeding Group.