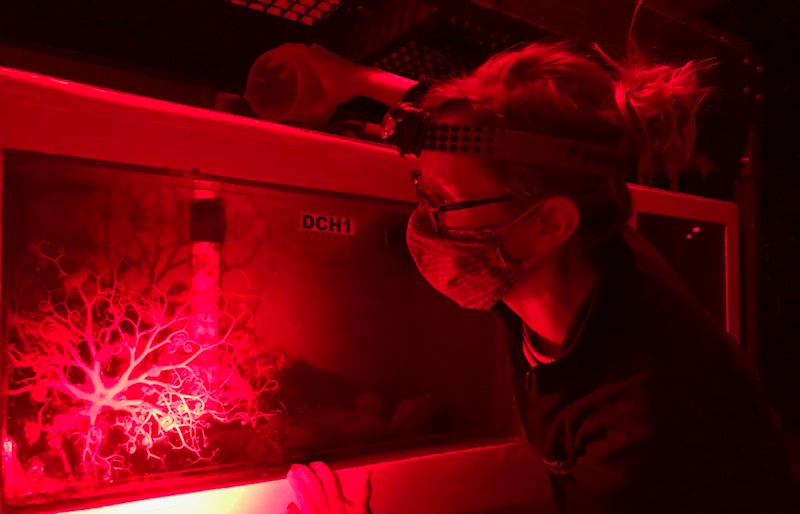 For all of you who always dreamed of working in an aquarium taking care of the animals, Megan Olhasso gives us a solid picture of this reality.

The ocean has been a life-long passion of Megan’s. As a child she spent summers on Catalina Island and started scuba diving at 12. Initially, Megan thought she wanted to be a teacher and still loves teaching informally at the aquarium. Megan received a Master’s in Management and Leadership knowing that good leadership leads to good team work.

Being so familiar with the environment, Megan began to work at the Catalina Island Marine Institute. That job lead to starting-up  the living collections at the California Science Center and continuing her work as an aquarist at the George Aquarium. Finally, she landed her dream job at the Monterey Bay Aquarium (MBA) where she is a Curator of Fish and Invertebrates.

Using her leadership in education and experience, Megan helps oversee the team of 30 biologists that takes care of the animals at the aquarium. Each has a unique role in providing care for the fish and invertebrates.

Into the Deep Sea She Goes

Megan and her team are developing the new deep-sea exhibit, called “Into the Deep: Exploring our Undiscovered Ocean”. This is a very exciting new exhibit as it will display animals that have only been seen by a few researchers and rarely seen in captivity before.

Bringing the Unexplored to Us

The exhibit is breaking new ground – no other aquarium has created a large scale deep-sea exhibit. Megan is on the benthic team, conducting research and development for the part of the exhibit displaying animals that live in the bottom of the sea. “It’s been a lot of fun learning new information and going out to collect for the exhibit.” The MBA team collaborates with the Monterey Bay Aquarium Research Institute (MBARI) and goes out to sea using Remotely Operated Vehicle (ROV) to collect specimens. Access to MBARI’s knowledge and resources is the only way the aquarium could ever create such an exhibit.

There is a separate team for the midwater marine animals, who share their knowledge of animals like jellies along with new species. 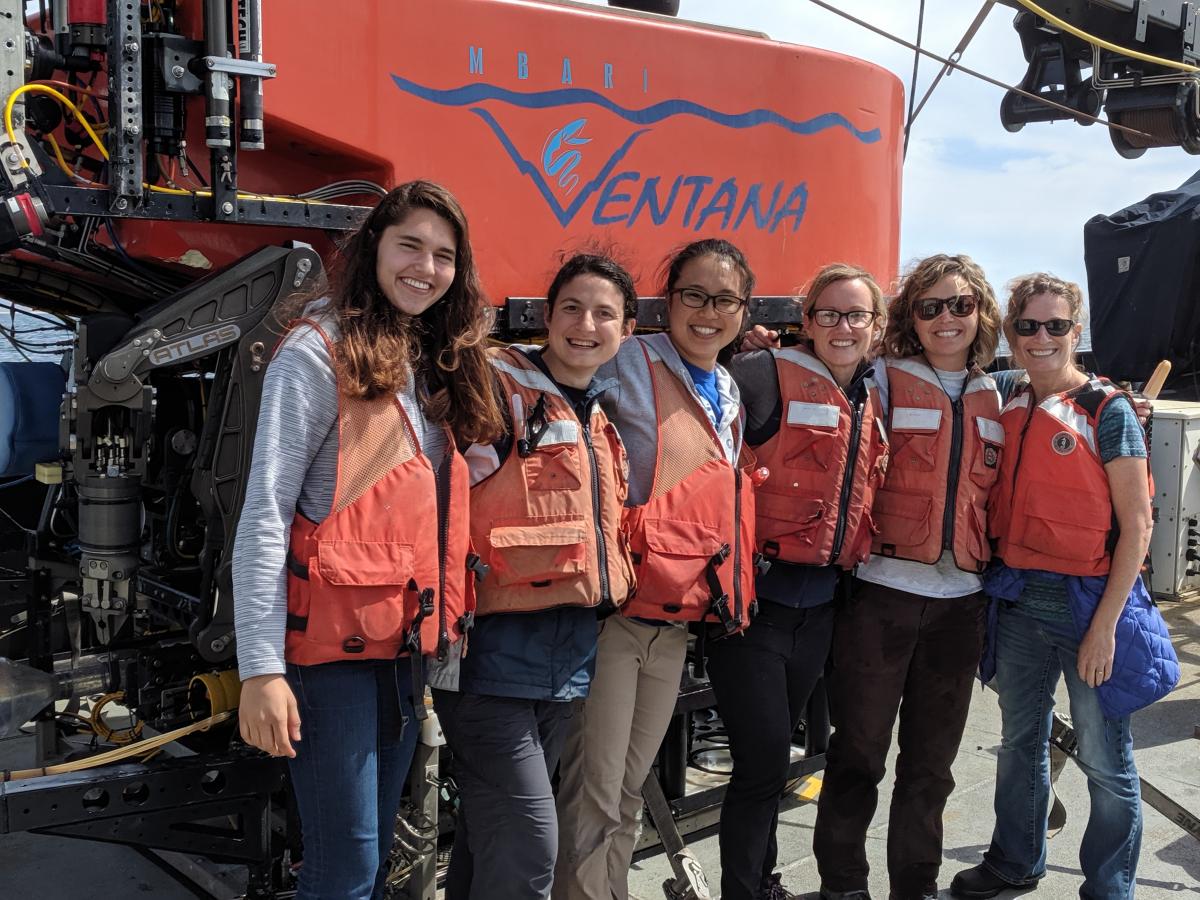 Planning is Everything When Collecting Deep Sea Animals

Collecting deep sea animals definitely has challenges. The first of which is weather- it has to be good. The team needs to have a list of animals they want to collect before heading out as that will change the location of the expedition. They need to tell the ROV pilot team their intention to ensure that they have the perfect equipment.

Once animals have been brought to the surface there is another set of challenges. How to get the animal out of ROV? How to control the light? How to keep it cold? For this, Megan’s team brings very specialized equipment. The pressure on the surface (as compared to the deep) is a consideration, but mostly it’s not a problem. The team has found many deep-sea species can survive at sea level if slowly acclimated to the pressure difference. Instead of mimicking the pressure at depths, it’s essential to mimic the lower oxygen levels.

Once the animals are at the aquarium, the biggest challenge to reproduce extremely cold water, dim light, oxygen level, and all conditions are met. It’s a lot of extra work for the team and requires strong organizational and communication skills to make it go as smoothly as possible. Since this exhibit is an unexplored endeavor, there’s no user manual guide the team. They’re creating the manual that heavily relies on scientific journals that documented what the animals needs are.

“One of the surprising challenges for the team is that you can’t put your hands in the water,” said Megan. How do you care for animals that live in water that cold? She is grateful to the knowledge and creativity of the husbandry team who think outside the box to make this development possible. 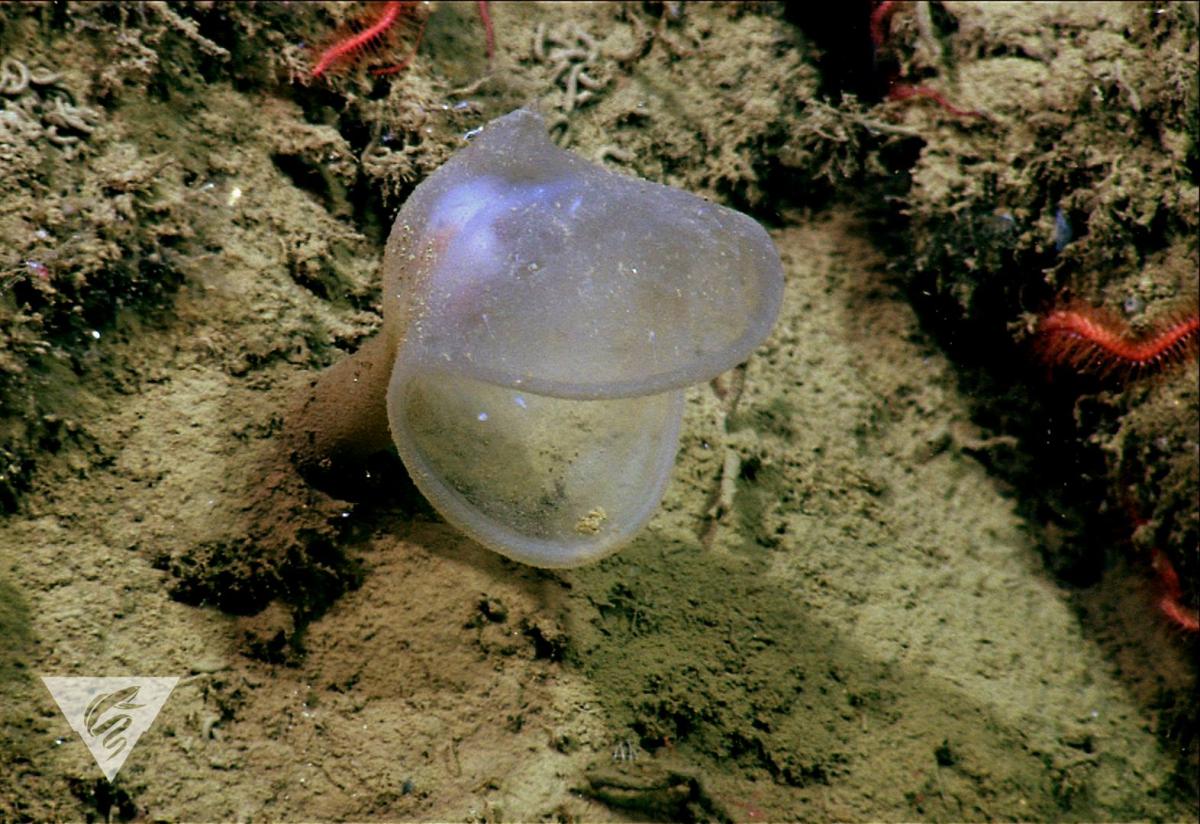 The team has learned a lot about taking care of the invertebrates they have collected. Some are detritus feeders while others are filter feeders. For filter feeders, the team makes cocktails of food and pumps that into tanks with automated systems. They also mimic marine snow by making “snow cubes”: ice cubes out of algae cells, copepods and krill. The “snow cubes” melt and sink to the bottom for the sea cucumbers and sea stars. Other filter feeders like crinoids (feather stars), basket stars and sea pens filter the snow out of the water.

We asked Megan what she would like visitors to know about the deep sea. “One amazing thing that most people don’t know is that every day, twice a day, the largest migration on earth happens in the deep sea when animals swim from the deep up to near the surface at night to feed on plankton,” Megan shared.

Our Impact on the Deep Sea is Real

Read more about the exhibit here.