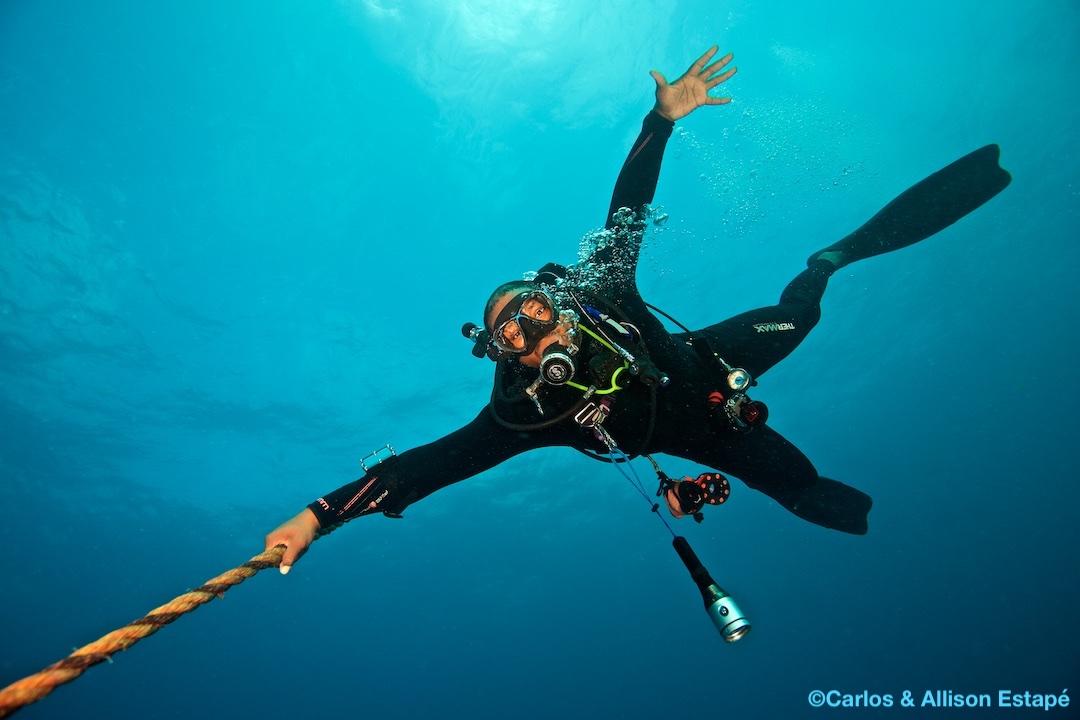 Although Colin Howe is now living far from the ocean in school in Pennsylvania, his mind has always been on the ocean. He’s working on his PhD in marine science at Penn State studying corals off the coast of Colombia.

Travel is second nature to Colin as he grew up a ‘military brat’, traveling with his parents all over the world. He lived in Japan from age 11 to 15. From Japan they went to Australia where Colin completed his first scuba dive. As a child Colin traveled to the Caribbean with his family. Colin’s Mom is from Dominican Republic and his Dad from Trinidad and Tobago. “I was fortunate in that I grew up with a huge value of education and was a ‘science kid’ at heart,” said Colin.

As a “military brat” he attended elementary school through his freshman year in high school on a military base. Colin took full advantage of all the benefits offered from a military education in a very safe environment.

In college at Old Dominion University, Colin studied marine science and started the first marine science student association at his school. A lot of professors gave him tips and suggestions about being a marine scientist. That advice, along with his love of the ocean, connection to the Caribbean and an internship studying coral reefs in the Florida Keys, led him to graduate school in marine science. 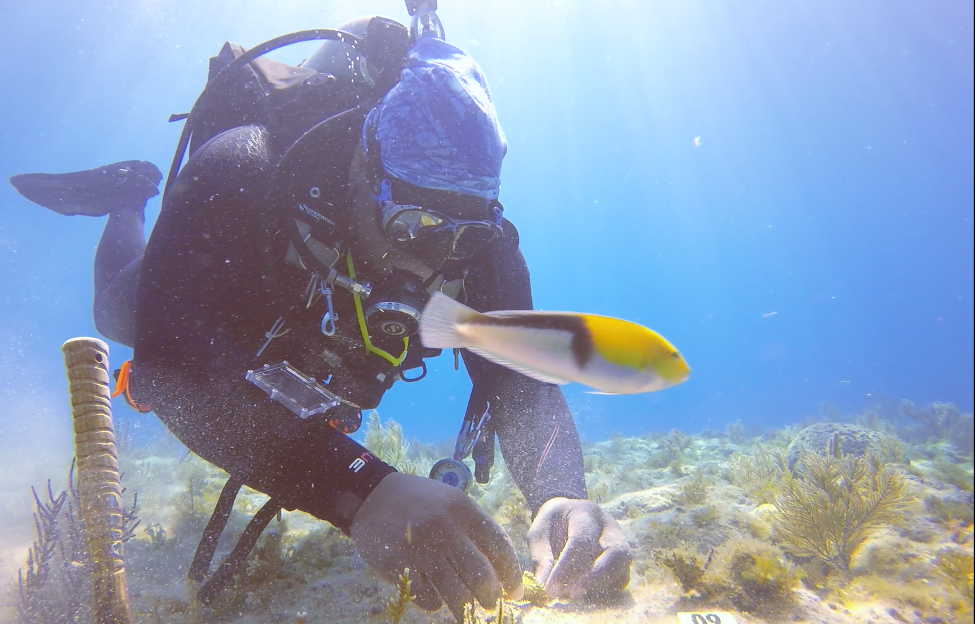 In graduate school at Penn State, Colin is continuing his studies of tropical marine ecology and coral reefs in particular. He’s studying the microorganisms that live inside corals –their microbiomes. Colin takes samples of bacteria that live inside of corals to understand how they support or limit the coral’s ability to survive? He works in a lab that conducts research on two coral reef tracts off the Atlantic coast of Colombia. The first site is called Varadero Reef and this reef is located near the mouth of the Canel del Dique river. The second reef is called Rosario and is located offshore within the Rosario and San Bernardo Corals National Natural Park.

At the Varadera site, a Hope Spot in marine conservation, the reef is thriving despite poor water quality and sediment flows from the river. Colin wants to understand what makes corals resilient. What does the microbial community tell us about the health of the reef? He and his colleagues are just getting started with a baseline understanding of the microbiome of the corals by sequencing microbes and bacteria. Then he can ask what is the microbiome doing with temperature increase from climate change, and other human-caused changes? Shifts in microbiome composition are connected to changes in coral health.

The Caribbean, once filled with coral reefs, still has fabulous diversity like in the Indo-Pacific. The microbiome is tailored to the reef. Colin says that it’s exciting to learn about small sensitive changes in corals to understand the big picture of what’s going on in the health of the ecosystem. 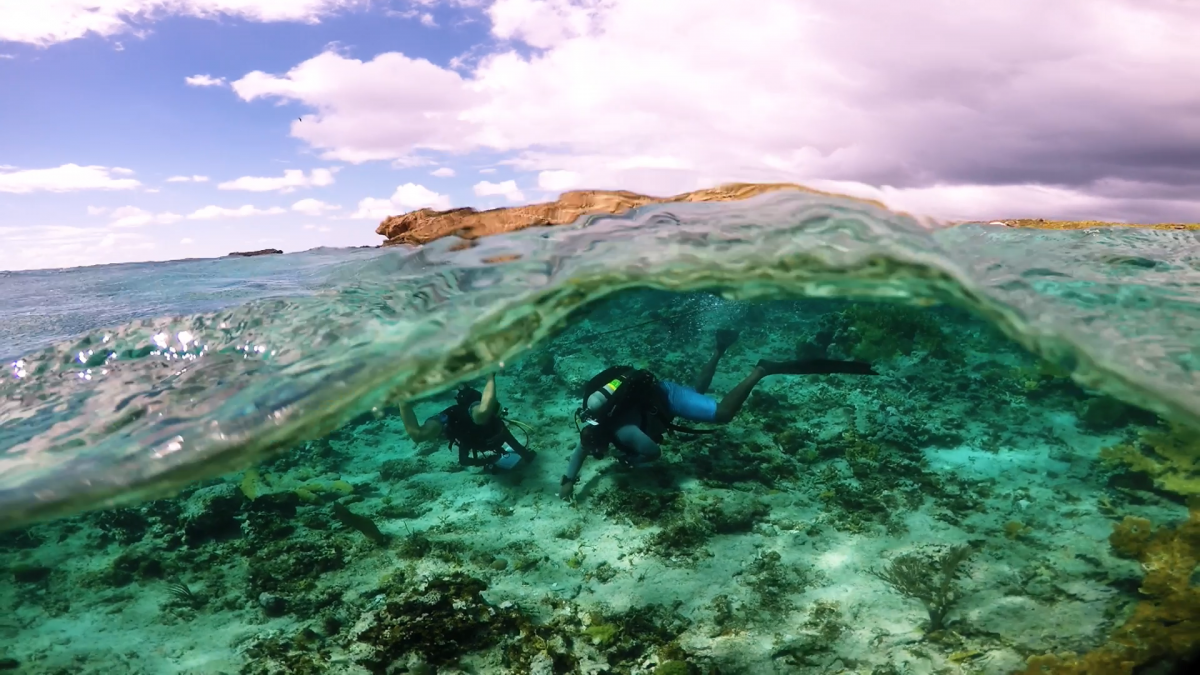 Every Picture Tells a Story

Colin is a natural storyteller with a photographic sensibility. He always had a GoPro and documented all of his diving trips, but it was hard to do this on his own while working on his doctorate. Luckily, SciAll reached out to him to bring him on board to produce marine science content. SciAll has the mission to “Humanize scientists, demystify the process of scientific discovery, and make STEM career mentoring accessible to all.” Colin says it’s a terrific organization aimed at early career professionals— sophomores and older in college who may be a bit intimidated by science. You can see his first SciAll video by clicking the link.

SciAll believes diversity is critical for having a robust and resilient framework in doing science. People from different backgrounds produce different ideas. There are scientists of all sorts in the organization and multiple people come up with concepts for the videos.

At the end of 2020, Colin was invited to be part of Black in Marine Science week. It was a great event where Black marine biologists told their stories. He joined a panel hosted by the National Aquarium. It was a first for Colin to be on a panel where the entire panel was Black. “During my career I have always been ‘the unicorn in the room’, so it was great to be among black science geeks like me”, said Colin. It was a welcome surprise to see how many Black scientists there were at Black in Marine Science week. 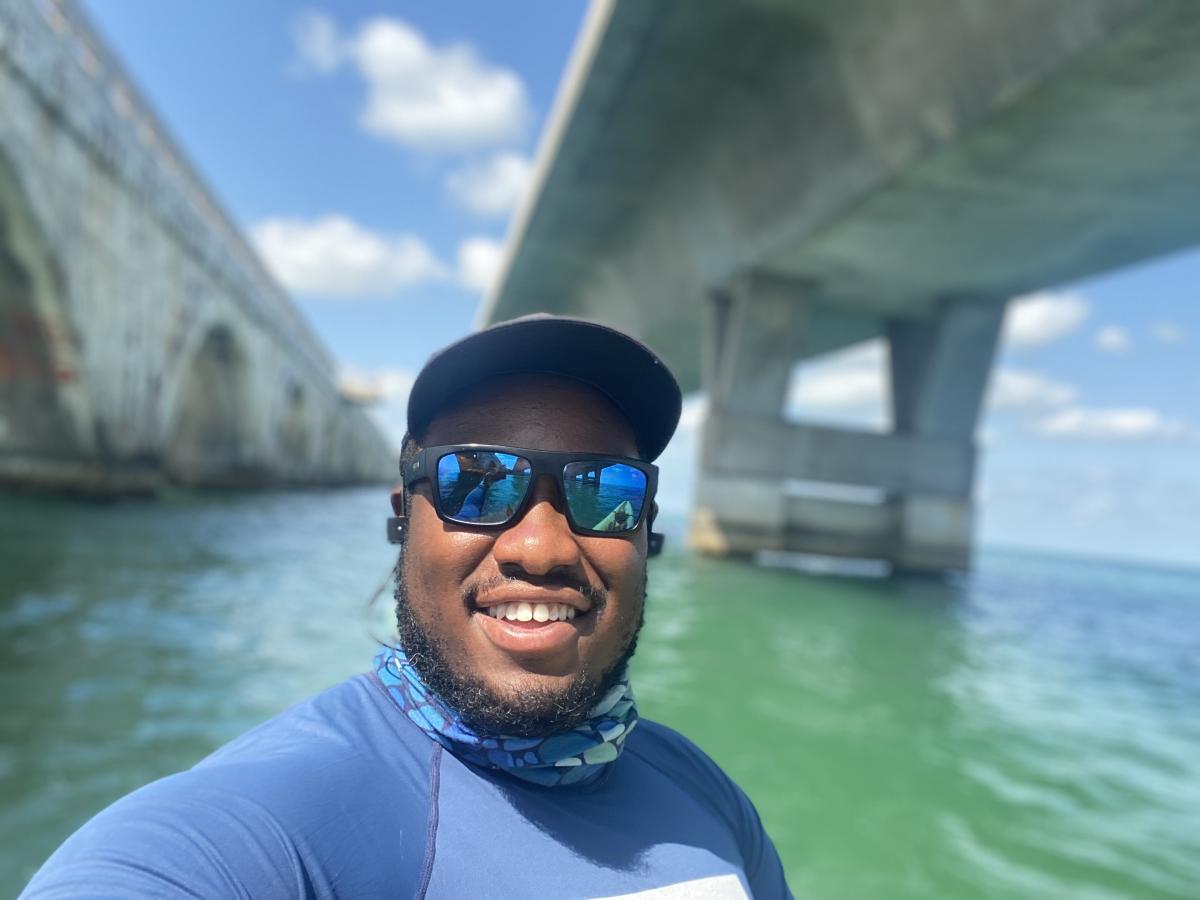 Mentoring is something that Colin has always enjoyed and drew him into founding the marine science club early in his education. Marine Science is a small world and it’s easy to make connections.  A former instructor really impressed Colin through passion for science, tough love and insight into why lobsters are so cool. These role models inspire Colin to mentor others.

We are grateful to Colin for sharing his experience and believe he’s a scientist to keep an eye on. His career is going to be fun to watch.