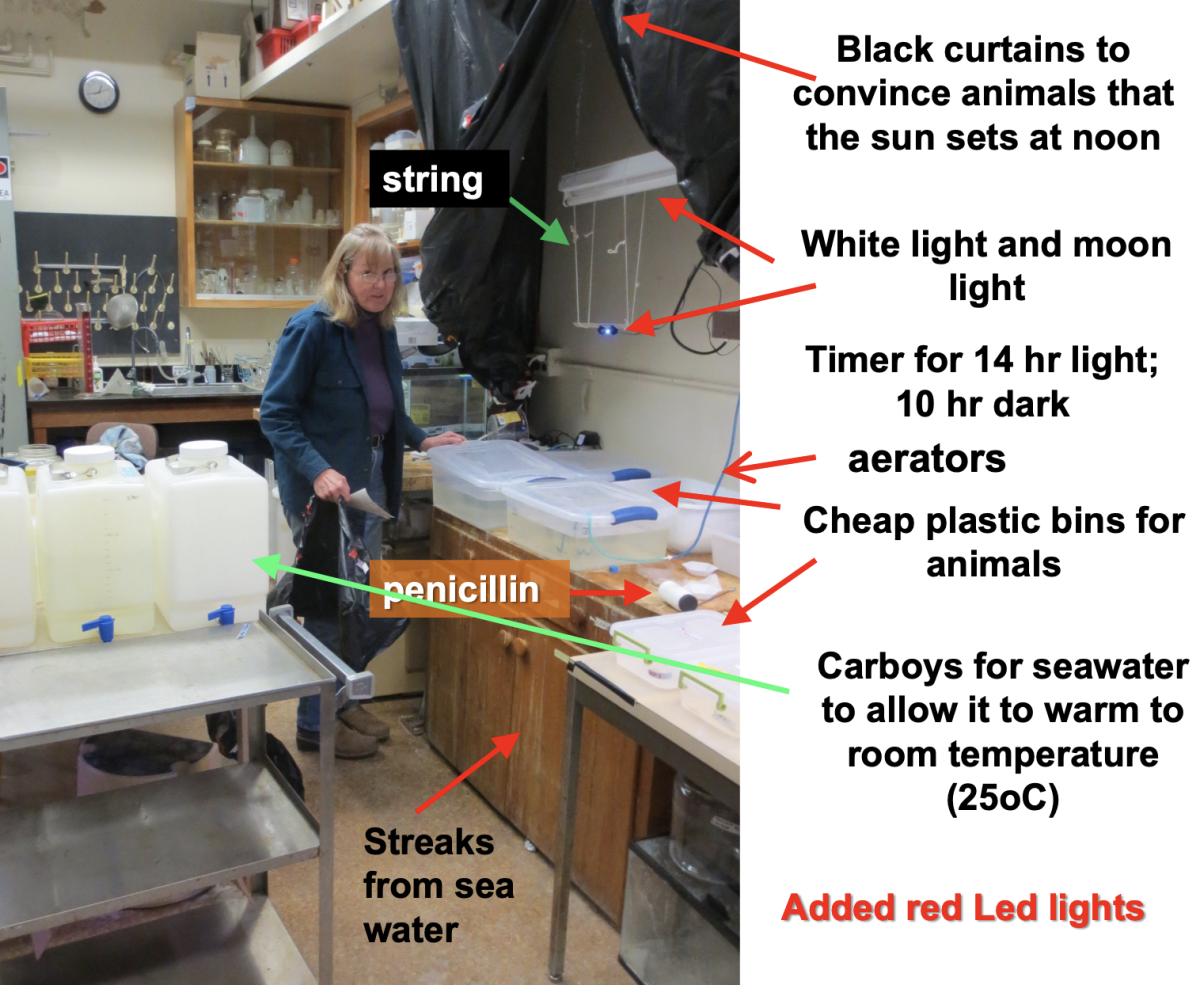 Linda Holland had been doing biology since she was nine years old: sometimes out in nature, sometimes in the lab. Learn more about Linda’s long road as a woman in science.

Growing up on the edge of a small town in New England, Linda was lucky to be close to nature. At about age nine she found frogs’ eggs, collected them in a jar, put them in an old hubcap in her sand box, and watched them grow; and when they put out legs, released them into a local stream. That’s when Linda decided to be a biologist.

Linda knew she wanted to be a marine biologist and chose Stanford because advanced undergraduates could collect animals at low tide along the California shore and brought them back to the lab for study. Dr. Abbott, Linda’s Professor at Stanford, lectured for hours focusing on both ecology and evolution. She obtained her B.A. degree and stayed at Stanford for two more years to get her Master’s degree on reproductive physiology of sea urchins.

When Linda was a child she went to a talk by Marjorie and Lorus Milne on the faculty at the local university who wrote nature books. Linda thought, “she’s a biologist, so I can be one too.” However, after just three years, even though her credentials were stellar, Marjorie’s position was terminated on the grounds that a married couple could not both have positions in the same department. Marjorie managed to continue to do biology with “pick-up jobs.” This was the beginning of Linda’s awareness of the struggles of women in science.

Linda describes her science career as having a “checkered past.” She had her first child while getting a Master’s degree. Her husband’s career and their family came first for many years. Linda went with her family to Naples, Italy when her husband got a post-doc at the Stazione Zoologica. They had two more children while they were there. When her husband got a job at Scripps Institution of Oceanography (SIO) , they moved again. Linda says: “Once again, I found that the situation for married women hadn’t changed. Scripps had a nepotism rule. I could not be hired there in any position. Moreover, all job applications required listing marital status, spouse’s profession, and number of children. I could get no job.” So, “to retain my sanity and keep my hand in, I volunteered at SIO, doing an electron microscopic study of regeneration of sea urchin pedicellariae.”

Eventually, she was able to find jobs in embryology in the biology department of University of California San Diego (UCSD) and, when that position evaporated, at a local medical research institution. However, after four years on the job, she felt she had to return to what she really loved—marine organisms.

Linda started out as a sea urchin physiologist. Her position in the UCSD biology department was in developmental biology and reproduction of a large marine worm. When that position ended, with three children in college, she took the position in medical research to help fund their college tuitions. When her children were through college, her husband took a sabbatical and she quit her job, arranging to return to embryology of marine invertebrates by spending a year at the Station Zoologique in in Villefranche-sur-mer, France. There she began to study appendicularian tunicates (sometimes called larvaceans), which were in continuous culture in the lab, to look at the fertilization process. As Villefranche/mer was a haven for plankton biology, she extended her study on tunicates to include all of the pelagic groups.

Meanwhile, as nepotism rulings were no longer in force, she arranged for a three-quarter time position at SIO running a lab in enzyme biochemistry of marine fish on the condition that she could have the other quarter of her time to continue her work on tunicates. The work on tunicates, and subsequently on amphioxus, went so well that she eventually was promoted to the position of full research professor, able to run her own lab and have her own students and postdoctoral fellows. 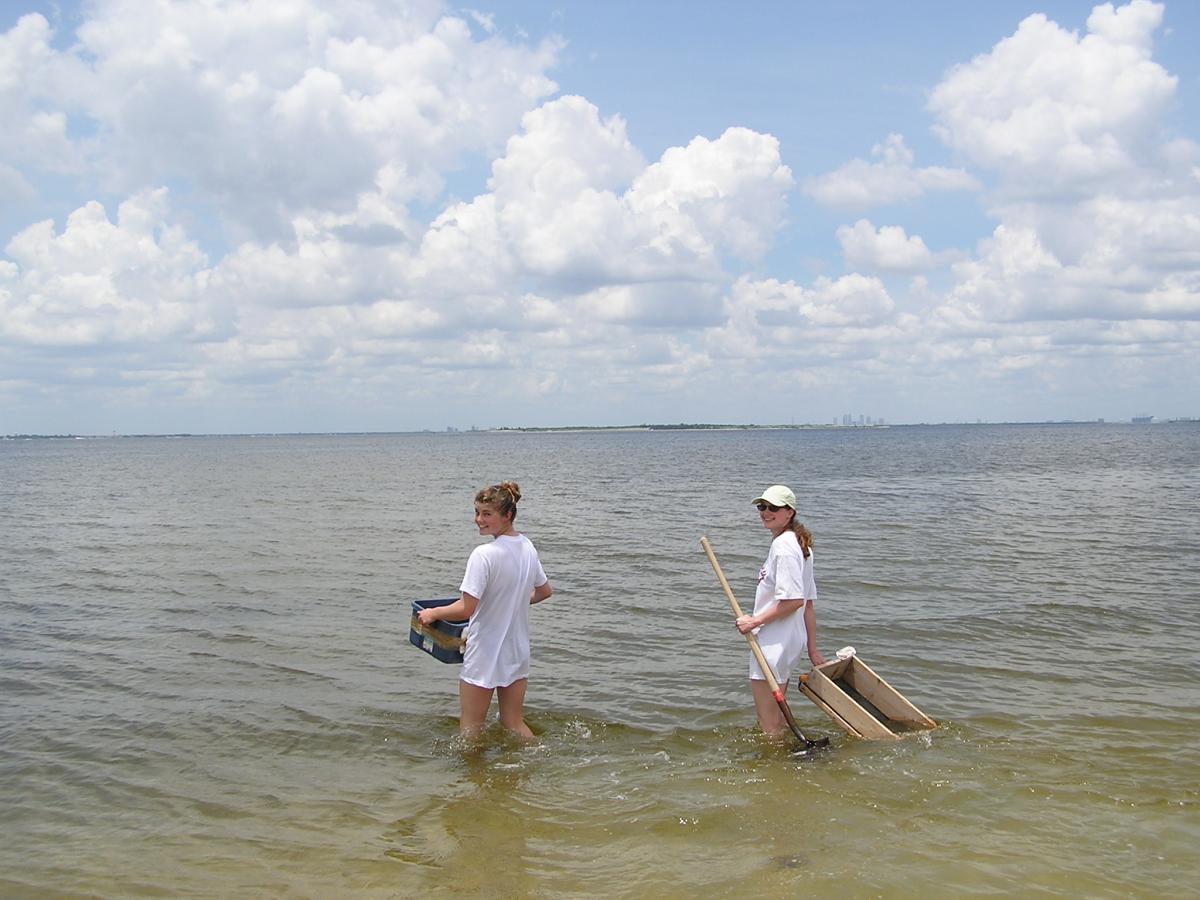 Studying amphioxus was her husband’s idea since Linda was working on tunicates: amphioxus like tunicates, are invertebrate Chordates. The Hollands worked in Tampa Bay where one species lives burrowed in the sand. In the summer they come out after sunset to spawn about every two weeks. Linda’s husband figured out how to induce animals to spawn in the lab on days they would normally do so in the field, which was a major breakthrough. She and her husband spent 20 years of summer field work in Tampa, collecting embryos and doing experiments. Now they have the animals in continuous laboratory breeding culture at SIO and can induce spawning in the lab by manipulating the temperature schedule. Having the entire reproductive process in the lab allowed Linda to study the developmental genetics of amphioxus.

Linda became interested in working on Hox genes in amphioxus. All animals have Hox genes. The Hox genes control the position along the anterior to posterior body axis in many bilaterian animals. Watch our video about this. Since amphioxus is at the base of the Chordate family tree understanding its Hox genes and comparing their expression and functions sheds light on the evolution of the vertebrate body plan.

Currently, Linda is working on the evolution of the genetic mechanisms for making segmented muscles. Muscles in vertebrates bud off sequentially from the tips of bands of mesoderm just anterior to the tailbud at the posterior end of the embryo.  In contrast, bands of mesoderm are lacking in amphioxus; instead in amphioxus the segmented muscles bud off directly from the tailbud. Linda is using amphioxus to figure out a developmental clock mechanism at the gene level. How is the timing of the budding off of muscle segments controlled? This appears to be a fundamental mechanism in the common ancestor of vertebrates and amphioxus. The simpler situation in amphioxus may shed light upon the clock mechanism that times segment budding in vertebrates, which is as yet not well understood.

Learn What Nobody Knows

Although Linda’s career path has not been traditional, she is a highly successful and productive scientist still working in her 80’s! Her advice to students who want to be scientists is that they find something that is interesting to them and ask questions about it. Do research in areas where people don’t know the answers to your questions.  Linda also advises “always work where you are learning something new and exciting”.