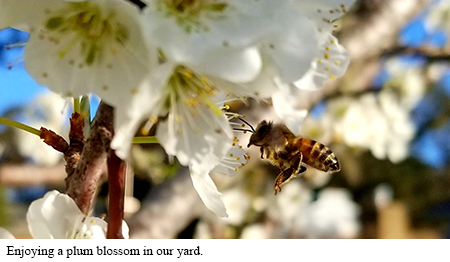 I’ve been hanging out with my honeybees a lot lately. There are many reasons for this, including:

This spring I’ve been conducting my own small experiment on how our bees respond to different music. Preliminary data indicates that Bosa Nova – (Joao Gilberto) mellows them out while I’m tending the hive, Eco Hip Hop (DJ Cavem) gets them psyched in the morning for foraging and Grateful Dead is their favorite end-of-day music to unwind to.

Mostly, our honeybees serve as a welcome respite from covid19 while providing abundant entertainment during our sheltering in place. (Who wouldn’t love a group holding dance parties every day in the backyard!?).

Bees live in a harmonious society where tens of thousands cooperate to serve the colony’s greater good.

Bees are by far my favorite terrestrial arthropod. “The honeybee, apis mellifera, descend from one ancestral species of vegetarian wasp that lived approximately 100 million years ago in the Early Crustaceous period, when huge dinosaurs were still stomping about and flowering plants were just starting to appear.” (From Honeybee Democracy by Thomas D. Seeley).

There are three kinds of honeybees, each with an important task:

Workers, (daughters of the queen), do pretty much everything including foraging, nursing offspring, keeping the hive clean, tending to and feeding the queen, among many other tasks throughout their short four-week lifespan. She will sense her end of days and selflessly depart the hive so that her sister workers don’t have the burden of removing her corpse.

Drones, are male honeybees and don’t do any work. They comprise about 10% of the hive population. They lay around the hive eating honey all day waiting for the opportunity to mate with the queen on her nuptial flight. Once they mate with her, they fall to their death. (Every fall I see our worker bees give drones the ‘bums rush’ out the hive door before they slob the place up and eat all the honey during winter months).

The Queen Bee determines a bees sex and lays 1,500 eggs per day (150,000 eggs over the summer!) and can live up to two to five years. She has the unique ability to designate which eggs will develop into female workers and which will become male drones. The queen will mate with up to twenty drones and store their sperm in her spermatheca organ for the rest of her life.

We are seeing significant threat and loss of bees due to the climate crisis causing habitat loss, confused behavior and disease.

The president of our Santa Cruz Bee Guild, Amanda Frank, described how the climate crisis is affecting bees in our community, “Bees don’t even know what’s going on anymore. Some trees are blooming two to three months early; which totally confuses them! Even a slight two-degree shift in temperature can alter how bees forage, mate, hibernate and swarm. It’s really hard for bees to know what to do now.”

The foreboding words commonly used on insecticides “do not apply when honeybees are present and/or plants are in bloom” reads like a ridiculous disclaimer to me as large trucks filled with beehives pull onto industrial crops. Here in the central coast of California honeybees and blooms are a year-round phenomenon.

Highlighted in this article, is a “study from the University of Vermont, showing specific evidence of wild bee decline in the U.S. As Elizabeth Kolbert (among others) described, we are in the midst of an extinction. There are all kinds of reasons for this, including loss of habitat, climate change, disease, and pesticide use. One huge influence on the decline in pollinators, specifically, is the way much of the world farms.”

The beloved honeybee, (with whom we owe one-third of our food to) are in peril. They fend off increased predators and parasites (i.e., varroa and tracheal mites), filter chemical toxins, and sustain our nutrition.  We must protect them. 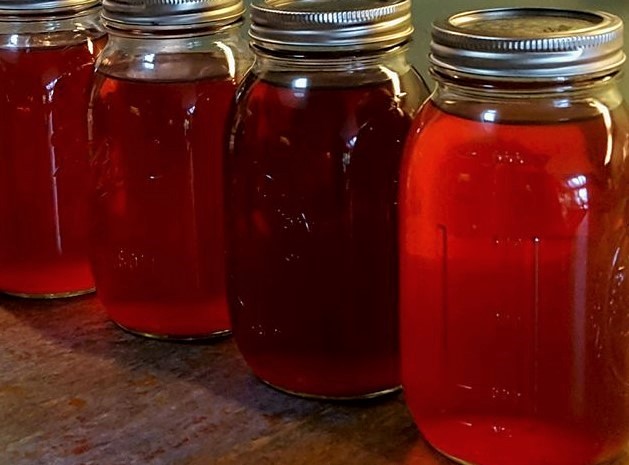 How Bees Keep Me

I have so much to learn from these darling creatures. Honeybees are the only insects that provide food for us. They keep us healthy. Their egoless sense of community-wide health provides an exemplary roadmap for all societies. Bees provide therapy for victims of trauma. Honeybees deliver new and interesting ways to prepare food. Follow honeybees and you’ll see your backyard as a universe onto itself where you’ll forget about ‘sheltering in place’. 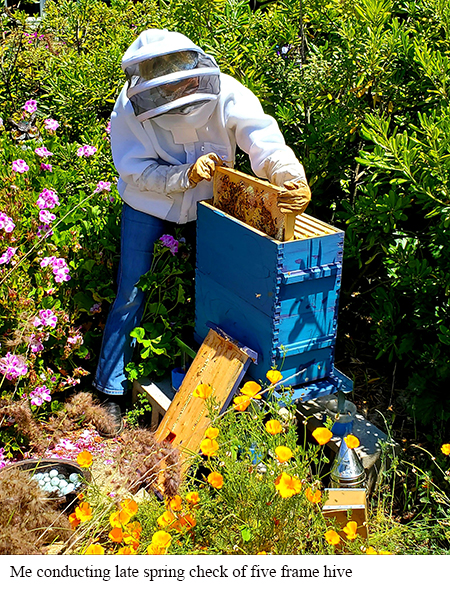