This spectrogram is a visual representation of a humpback whale song that was repeated twice over a half-hour period. Image: John Ryan/MBARI

From where we stand on land or on a boat deck, we may think the ocean is silent; but it most definitely isn’t. In the ocean where there’s little light, many marine animals rely on sound to communicate, navigate and find food. Sound travels far and fast in the ocean: it can travel about a 1000 times farther than light underwater, and more than four times faster in water than in air.

Marine mammals use sound to communicate and hunt for food. Whales and dolphins are the most vocal. Since these animals are hard to study in the wild, listening to them is one of the best ways to learn about their behavior. By studying recordings made over the years, scientists have increased their understanding of whales, which will help protect populations. The Monterey Bay Aquarium Research (MBARI) Institute has an underwater microphone that you can listen to here. You can listen live or choose a species to listen to from past recordings. 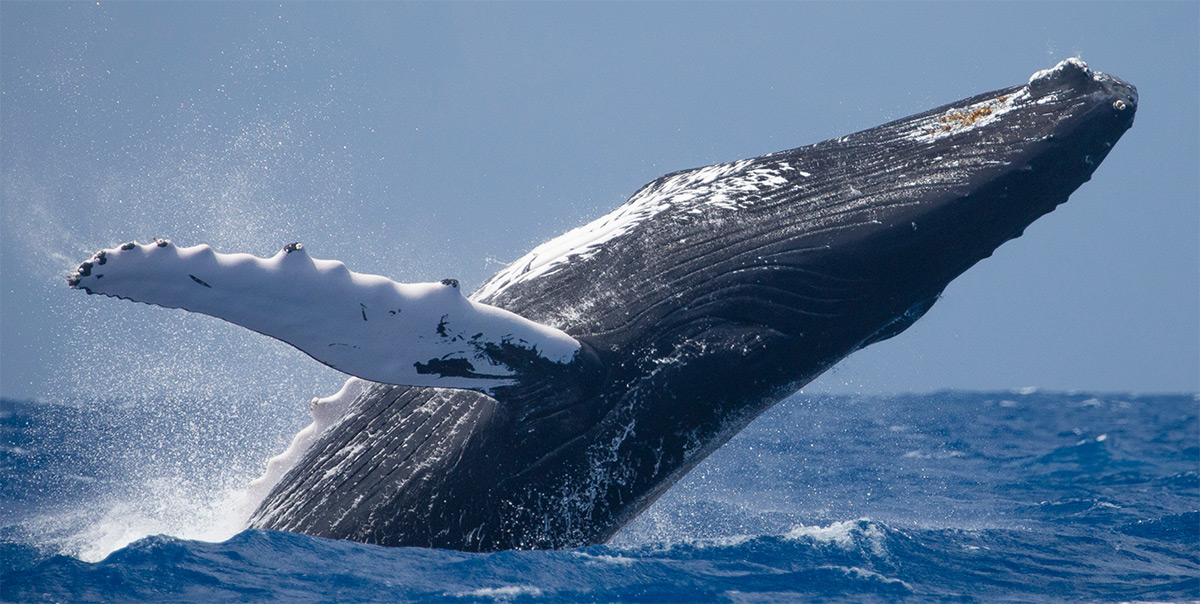 Humpback
Male humpback whales can sing a 30-minute long song and sing that song repeatedly for hours. The whale songs are loud, complex and change over time. They sing during courtship and also while feeding and migrating. Listen to songs on the breeding grounds here.

All males in a population sing the same general song pattern. But, within that pattern males improvise. Scientists have known for years that whales exchange songs and learn from each other. Recently researchers have discovered that populations on opposite sides of the African continent meet in the southern ocean to feed on krill. When there, the whales sing and exchange melodic riffs—as this article says: they “jam.” This complex interaction can even be called a cultural transmission.

The songs of humpbacks are the most famous, but other whales also communicate with a range of calls. Blue whales make very loud sounds — not surprising as they’re the largest of the whales and the largest animal ever. Worldwide blue whales sing about thirteen distinct songs. Listen to some of the songs here.

In the Northeast Pacific where scientists have long studied blue whales, they’ve found a difference in the whales’ daytime and nighttime calls. In the summer when feeding, the whales sing mainly at night. But they sing during the day while migrating. Scientists at Stanford have observed an acoustic signal that indicates when the migration from feeding grounds to breeding grounds has started, a 4,000-mile journey.

Using a combination of recordings from the MBARI microphone (see above) and acoustic tags on individual blue whales, the scientists discovered this song pattern. If we can detect a difference from when they’re feeding and when they’re migrating, maybe the whales are signaling each other that it’s time to move.

Because istening in on the whales’ sounds gives scientists a way to understand their behavior and movement, it will also help us protect them from ship traffic, fishing-line entanglements and other human hazards.