Can Salps Save Our Planet? 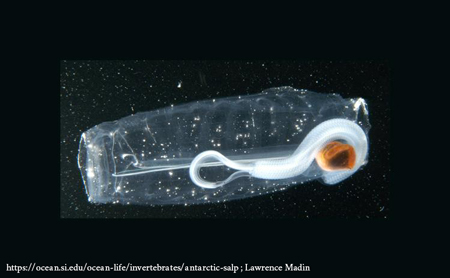 If you’re lucky, you might see salps gliding through the ocean singly or in long chains. The long chains make migrating to the surface of the ocean more efficient. These chains are a part of their life cycle: a solitary salp reproduces asexually, creating a colony of genetically identical animals. Then, each individual in the chain will reproduce sexually to create solitary salps, starting the cycle again. 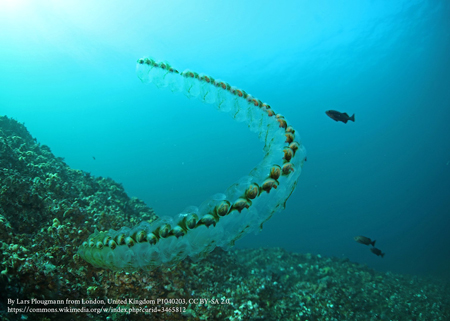 When there’s a huge phytoplankton bloom, salps form gigantic swarms, reaching densities (in one study) of up to 5,000 individual animals per cubic meter (35 cubic feet) and covering vast expanses of the ocean.

Here’s where the answer to the question comes in. When they’re swarming and feeding in the millions, salps play a big role in carbon transport. They consume huge amounts of carbon-containing phytoplankton on the surface. Then they produce large fecal pellets (poop) that sink quickly to the depths, transporting the carbon they ingested. "One swarm covered 100,000 square kilometers (38,600 square miles) of the sea surface. The scientists estimated that the swarm consumed up to 74 percent of microscopic carbon-containing plants from the surface water per day, and their sinking fecal pellets transported up to 4,000 tons of carbon a day to deep water."

Scientists are studying the role these global creatures play in carbon transport in the ocean.

Watch how a salp pumps water