​Boris is a famous missing link in the evolution of chordates: he’s an early tetrapod (tetrapod means “four-legged”) fossil. Paleontologist Jenny Clack was so excited when she uncovered him that she named him Boris. Boris is a missing link because he represents an animal who may have been the first of its kind to make the transition from life in the sea to life on the land. This invasion of the land by vertebrates was a key moment in evolutionary history, leading to colonization of the land by four-limbed animals.

Based on fossil evidence paleontologists think that the first tetrapods came on land during the Devonian Period (408 to 360 million years ago). Boris is a remarkable fossil of an Acanthostega gunneri, with eight fingers on the end of each of its four limbs. Clack and her team also found other Acanthostega fossil skulls. The researchers in her lab used high-resolution X-ray computed tomography scanning (CT scanning, often used on humans) to analyze two other fossil skulls, nicknamed "Rosie" and "Grace" and developed the first 3D computer model of Acanthostega's skull. 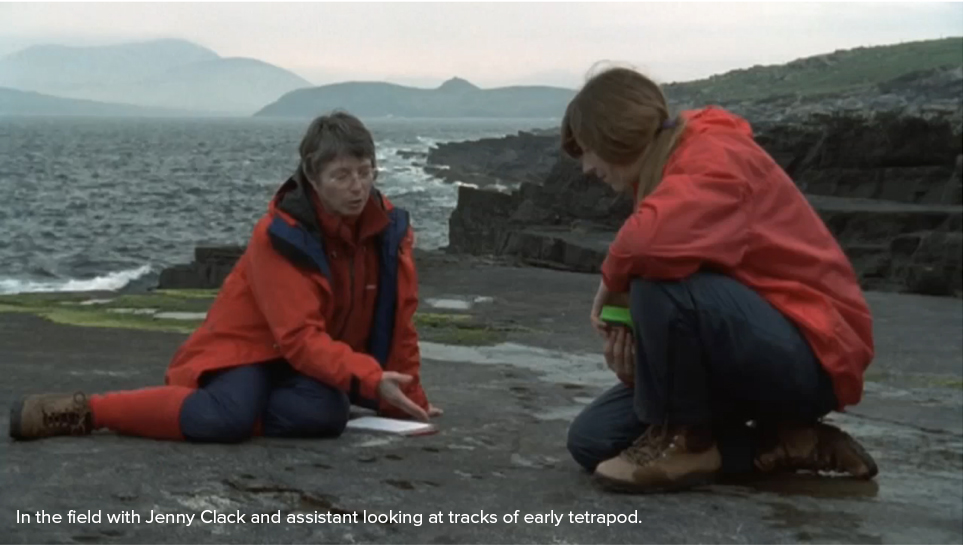 The fossils truly tell the tale of the transition from life in the sea to life on land: Boris and other Acanthostega had both lungs and gills, indicating that they spent time both in the sea and on land. Later tetrapod fossils would have no gills. Based on the 3-D models, Clack believes water supported the body weight while Acanthostega used its limbs to steady itself in the water and its fingers to clutch swamp plants for support. Watch Jenny Clack examine tracks of an animal like Boris and describe how she thinks it moved on what was then soft, miuddy marshlands.