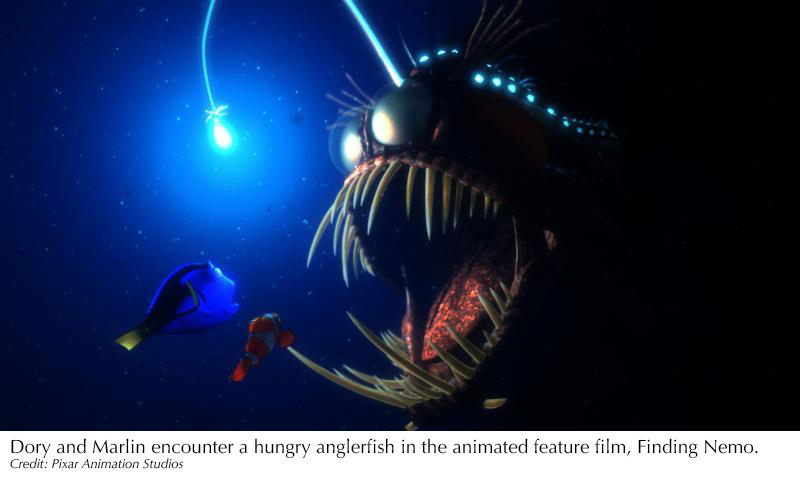 You may remember seeing an anglerfish in the movie Finding Nemo. It definitely made an impression on us.

Some species of anglerfish are called “devilfish”, but no worries, they’re pretty small and live in what’s called the ‘Midnight Zone’ (below 1000 meters) in the deep sea where’s it’s always dark.

The anglerfish lives up to its name. A female anglerfish uses its glowing lures to draw prey close enough to grasp with its sharp, pointed teeth. As there are many species of anglerfish, there are many variations on the type of “fishing pole”, including some with floats and even hooks. And that lure is retractable so the fish isn’t always “fishing”. Check out this video.

The lure is a luminescent piece of the fish’s dorsal fin sticking up above its mouth. The light in the lure is created by a community of symbiotic, luminescent bacteria, called Photobacterium, living in the lure. The bacteria get nutrients from the fish; the fish gets light from the bacteria. And different species of anglerfish have different symbiotic bacteria. 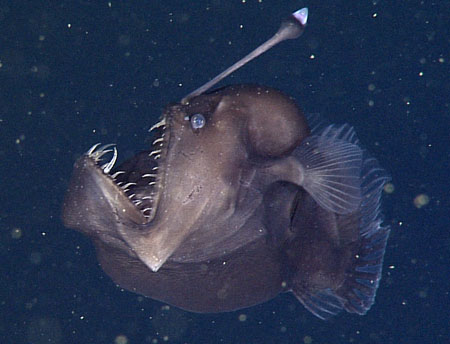 Finding a mate in the dark of the deep is a challenge for all deep sea fish. Anglerfish have solved this in a unique way: the males have become very small and parasitic on the female. When the young fish are swimming around and a male encounters a female, he latches on with sharp teeth. Eventually, the male connects to his mate’s blood and skin, loses his eyes and organs becoming only a body with testes. Maybe you don’t want to imagine this. That’s why it’s only females that fish. Watch this video of a female anglerfish with an attached male:

It gets stranger: a female may carry six or more males on her body.