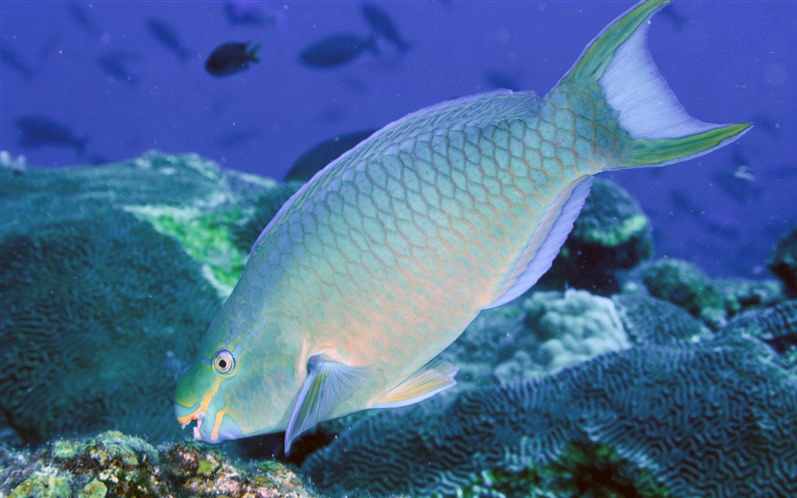 Parrotfish eat the algae on coral reefs, keeping them clean and clear, allowing sunlight to reach the algae living within the corals.

hese brightly colored fish get their name from their fused teeth that make the fish look like they have a beak, There are about 80 species of parrotfish living on coral reefs around the world.

Parrotfish graze on the algae growing on both corals and rocks throughout a coral reef. The fish’s ‘beak’ bites off pieces of corals to eat the coral polyps growing on the surface. The polyps host symbiotic algae, called zooxanthellae—that’s what the herbivorous parrotfish are after for their meal.

You can thank parrotfish for the white sand around coral reefs: when the parrotfish crunch coral skeletons they produce as much as one ton of sand per acre of reef. These fish have a second set of teeth (beyond those fused ones) in their throats that grinds-up the hard coral skeleton, which then passes through their gut landing on the reef as white sand. The fish spend 90% of their days biting the reef and excreting sand.

Some scientists think that parrotfish may help restore coral reefs. They munch down tons of dead corals every year making room for young corals to settle, grow and build up the reef. An Australian scientist studying reefs in both the Caribbean and the Pacific learned that in marine reserves, where fishing for parrotfish is prohibited, coral reefs are six times more resilient to coral bleaching and other disturbances.

Using the fossil record in the Caribbean to analyze what the reef was like before human fishing, researchers concluded, “that if we want to protect corals we have to protect the parrotfish from overfishing.” These results confirm the critical role of parrotfish in maintaining coral-dominated reef habitat and the urgent need for restoration of parrotfish populations to enable reef persistence," said the authors.