In the deep sea where there’s little sunlight, the behavior of animals remains largely a mystery. However, the more scientists observe, the more they discover about how creatures are behaving in the dark.

Animals in the mesopelagic between 200 and 1,000 m (656 and 3,280 ft) have many adaptations for finding food and mates, communicating, and hiding from predators in this mostly dark realm. Read more about those adaptations in our blog. However, there are still some visual predators in the deep sea. To avoid being eaten, some creatures are reflective or transparent, some use bioluminescence to confuse predators, and others use camouflage to mimic bad-tasting or dangerous animals.

Cephalopods in shallower water use a wide array of postures and camouflage to communicate and hide. With that astonishing range of behaviors and signals, it wouldn’t be surprising that similar behaviors evolved in the deep sea.  Scientists have observed deep sea cephalopods using color, posture, movement, and bioluminescence to communicate and avoid predation.

One of these is the swordtail squid, Chiroteuthis calyx. It’s named swordtail because as juveniles these squid have long, ornate tails. Scientists couldn’t figure out the tail’s function since it disappears when the squid reaches its adult form. Frequently on their dives with the ROV, scientists encounter Nanomia, a small siophonophore. But looking closely they noticed that all the Nanomia were not really siphonophores. Some were actually juvenile Chiroteuthis positioning themselves to look like Nanomia. The squid’s long tail was hanging down exactly like the trailing feeding polyps of the siphonophore. This was a classic example of mimicry. The siphonophore has numerous stinging cells, making it a prey item predators avoid. The juvenile squid escapes being eaten by looking like another animal that predators don’t eat. 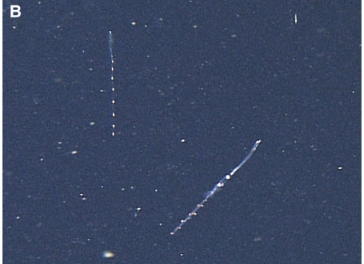 That's Nanomia on the left and the swordtail on the right. Researchers observed the squid orienting and coloring its tail and body to closely match the siphonophore’s. It’s the first documented case of a cephalopod mimicking a siphonophore. What do you think – can you tell them apart?

Watch this MBARI video about the swordtail.