The first thing Kasie Regnier does when she arrives at the Monterey Bay Aquarium each morning is to check out the Kelp Forest tank, which draws water directly from the bay.  The clarity of the water tells her how the aquarium’s water system is doing – even before she looks at the data from sensors. That’s her job as Director of Applied Water Science. 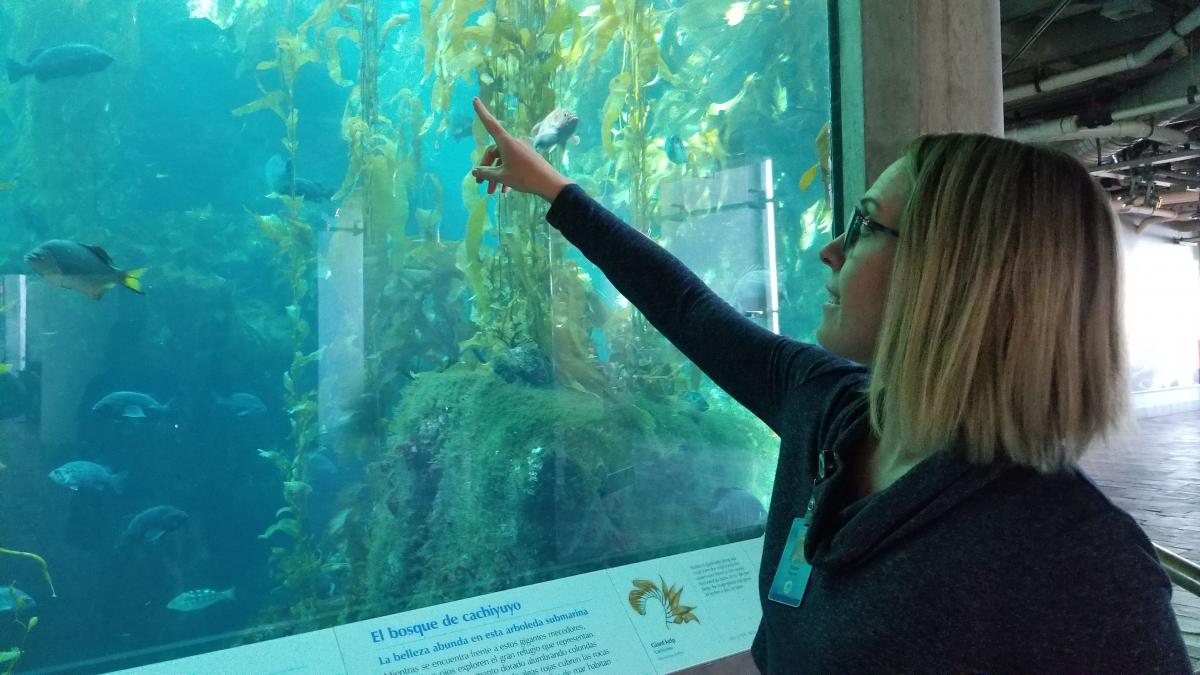 The Long and Winding Road

Kasie grew up in the countryside of Georgia, far from the ocean—and while Kasie’s path to her “dream job” hasn’t exactly been by design, it was when she saw the application of organic chemistry that she got the bug. “My family thought I was crazy to pursue water quality – but, immersing myself in academia just wasn’t for me.” While in school at Swarthmore College, Kasie studied Marine Biology on a coral reef in Australia and has been immersed in the ocean ever since. Kasie then went to the University of Hawaii for a graduate work on the behavior and neuroscience of sharks and fish. 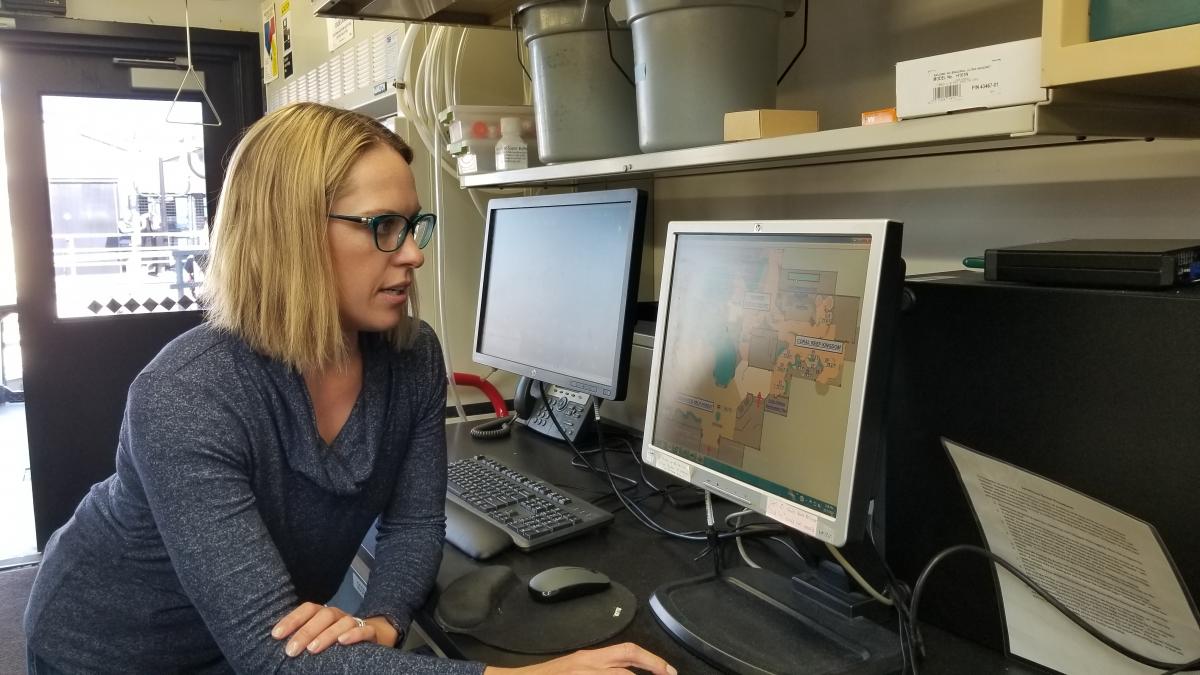 While Kasie was stationed in the field on Coconut Island, she was stung by a highly venomous cone snail. What followed was a very scary time in the ICU where she was paralyzed from the waist down. Fortunately, she recovered fully. Her stay in the hospital cemented her resolve: no academic job for her. Kasie realized she liked applied science: like solving environmental problems and conservation, even if there were certain hazards.

Although Kasie didn’t really like chemistry in school, she knew that water quality had a big impact on how animals survived in different environments. Once she saw how important chemistry was, she applied for a job at the Virginia Aquarium in the water quality lab. Kasie had found her niche. From there, she came to the Monterey Bay Aquarium and also studied for her second Masters from Harvard in Sustainability Management. 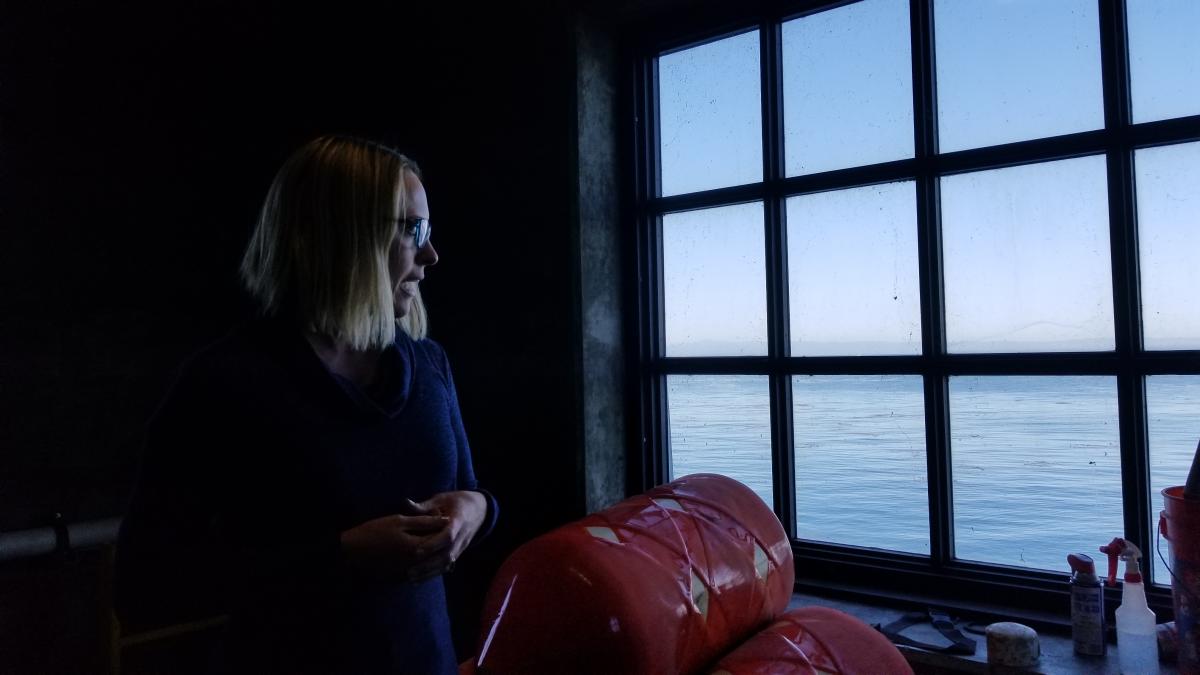 As someone whose brain works at lighting speed (with enthusiastic physical energy to match), Kasie believes that monitoring and balancing the dynamic ocean water for marine wildlife is the perfect job for her. Kasie’s uses all her knowledge and passions: physiology, managing labs, environmental monitoring for water discharge, chemistry methods, leadership, and engineering life support. She spends time solving problems for the animals that live at the aquarium.

Sustaining healthy water quality for any size aquarium is a dicey endeavor, at best. But, for a huge aquarium like the Monterey Bay Aquarium—who draws its water from the Pacific Ocean—it’s downright harrowing.

Some animals in local exhibits need water from the Bay. Other animals, in special exhibits, need entirely different water. Kasie’s department is also in charge of discharging water from the tanks back into the Bay. The requirements are stiff since Monterey Bay is part of the Monterey Bay National Marine Sanctuary; the water needs to go out cleaner than when it came in.

Designing new exhibits presents challenges for water chemistry. For example, some deep sea animals live where there’s less oxygen. How does Kasie create low oxygen water without adding gases to the water? Aquarium staff, armed with the newest technology, tirelessly work to create an aquatic environments where a diversity of animals will thrive 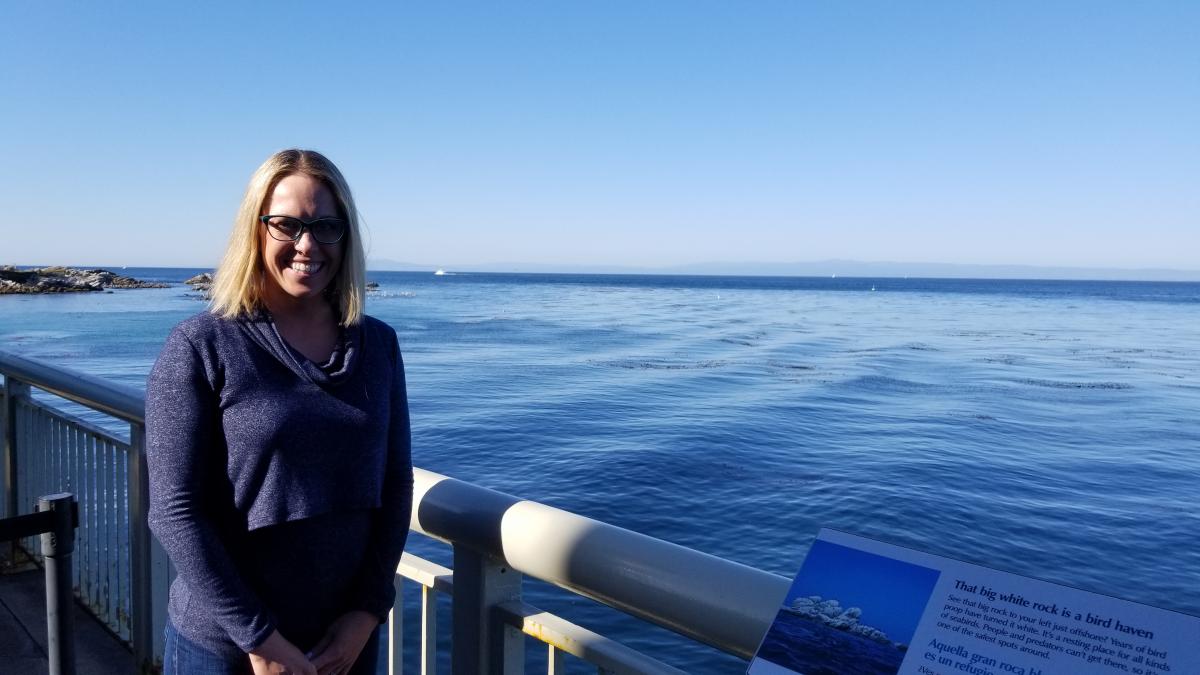 Kasie really enjoys working with the veterinary team. Her lab has a new Chromatography machine that can show how long animals retain medications.  They can even run samples of medications for other aquariums. Her microbiology team can do DNA analysis to see what may be harming animals, like in the sand dollar tank.

Climate change has come to Monterey Bay; and the Bay will continue to change. Kasie says that the challenge is how to match the tanks in the aquarium if it’s not going to be the same Bay in 10 years. Sensors on the intake water measure oxygen, pH and temperature. The immediate issue is when there’s an increase in upwelling and oxygen levels and a decrease in pH.

The aquarium thinks of itself as being responsible stewards as the exhibits might need to adapt to what’s going on outside. And, Kasie takes this responsibility very seriously. “We have to be able to look at what tomorrow might bring. The aquarium is completely at the mercy of the ocean. It depends on the water coming in just like all of us are dependent on the ocean. The aquarium reflects human effects on the ocean and it always reveals itself in our aquarium.”

“If you’re passionate about something, stick to it. It’s important to not fear the road less traveled,” said Kasie when asked what her advice would be to budding scientists. “Approach opportunities with ‘let’s do that!”