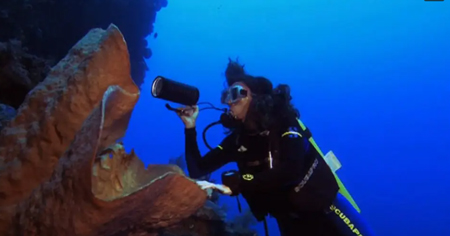 Dr. Cristina Diaz has become famous in marine science circles for being the “sponge scientist” in the video on Shape of Life. Her love of sponges has taken her all over the world as a “freelance” biologist. Cristina says about sponges: "They are beautiful. They're original. They're mysterious. They are hundreds of millions of years old, yet they are still found all over the planet, in every sea."

Cristina grew up by the ocean in Venezuela. By the age of 15 she knew she wanted to study the ocean, so Cristina majored in biology at the largest public university in the country, “Universidad Central de Venezuela”. As an undergraduate she had the good fortune to take a summer Coral Reef Ecology class at the Discovery Bay Marine Lab, Jamaica, with Dr. Shirley Pomponi and Dr. Judy Lang. That class shaped her future as a marine biologist and led to a life-long collaboration with Dr. Pomponi.

In 1986 Cristina worked with Dr. Pomponi, faculty of Harbor Branch Oceanographic Institute, on biomedical research looking for marine plants and animals that produce chemicals that can be developed into drugs to treat human diseases like cancer: they were doing what’s called “bioprospecting”. 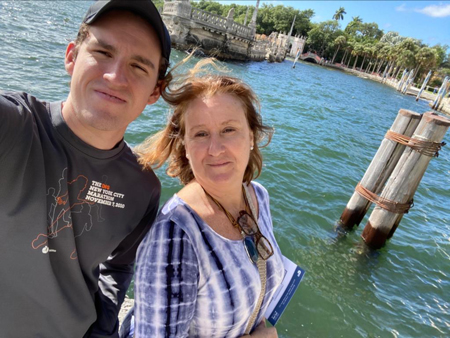 The team traveled all over the world collecting tissue from sponges, tunicates, sea fans, and other invertebrates from shallow waters to 3000 feet deep. That experience at Harbor Branch changed Cristina’s life: that’s when she became hooked on sponges. Although at the time Cristina didn’t want to leave her family in Venezuela, she did her PhD at the University of California, Santa Cruz in Organismal Biology. For her PhD, Cristina amplified DNA from bacteria living inside sponges that had never been sequenced before, and studied the ecologic relationship between the bacteria and their sponge hosts.

After doing post-doctoral research at the Smithsonian, she returned to Venezuela with her son Nicolas (right), now age 23, who was a toddler in a scene from Shape of Life: the Chordates.

Have Microscope, Will travel: a Nomadic Marine Biologist

“I always carry a microscope,” Cristina says, “that makes it easy for me to live a nomadic life.”

Cristina’s expertise in sponge taxonomy made her invaluable to teams that were bioprospecting medicinal compounds from sponges. Sponges are like a “natural pharmacy” for new drugs. They  have already provided the basis of the drug ACT, which is a treatment for HIV- AIDS. In doing bioprospecting research, Cristina has had the opportunity to study sponges all over the world.

Cristina loves taxonomy and especially discovering new sponge species. To identify a sponge species, Cristina looks at shape, color, the tiny pores, and how specialized cells are distributed. All the things that are not usually described. Then she looks at sponge spicules and  their arrangement in the sponge body or skeletal architecture, which is the traditional way of identifying sponges. And, of course, she does genetic analysis as well through collaborations with other scientists or labs. 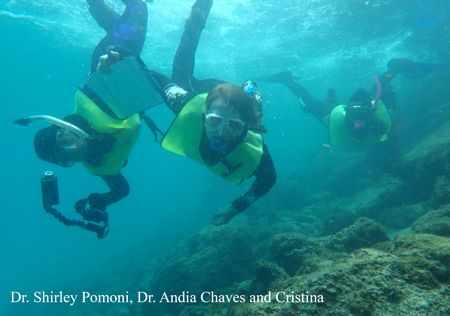 Cristina is once again at Harbor Branch Oceanographic Institute -Florida Atlantic University- (HBOI-FAU)collaborating with Dr. Shirley Pomponi. With a team of five female and one male scientist from HBOI-FAU and the Smithsonian Institution, Cristina is studying the biodiversity in the Indian River Lagoon, on the Atlantic coast of Florida, the largest estuary in the southeastern US. The lagoon has gotten a lot of attention due to recent toxic algal blooms. The ecosystem has oyster beds, mangroves and manatees among its diverse marine components. Cristina’s role is identifying sponge species; others are doing ecology, genetics, tissue culture, and cryopreservation (preservation at an extremely low temperature). Researchers thought there were 40-50 sponge species there; Cristina has in the first phase of research identified around 80.

Sponges’ role in the ecosystem

Cristina’s passion for sponges leads her to tell us how important they are in every ecosystem where they live. Their body plan is like millions of little mouths constantly taking in water. Their system of flagellated cells moves that water continuously into the body, and then releases water with metabolic waste and materials that the sponge doesn’t need. A one kilogram sponge can pump about 24,000 liters of water a day! That same sponge may have billions of bacteria living inside of it. That amount of pumping not only improves the water quality but also the sponges release nitrogen compounds (ammonia, or nitrate) and carbon (dissolved and particulate) making them available to other organisms.

Sponges are important in building coral reefs around the world, giving them additional structure and influencing nutrient and carbon budgets. Some sponge species bio-erode: they break coral into sand. Sponges are food for some animals, like green sea turtles and some species of fish. And many species of fish and invertebrates find safe harbor inside sponges.

Cristina is excited about discovering and describing new species, and she wants to do sponge genetics to see how species are related and how these early animals have evolved. She also wants to do more collaboration with microbiologists to try to better understand some of the sponge’s metabolic processes, and their unique microbe-sponge associations.

The past three years she has carried on Sponge Biodiversity studies from Mesophotic reefs (between 30 to 150 meters deep) Cuba, Eastern Gulf of Mexico and the southeastern US. These communities have an important portion (20-30%) of unknown species.

As a “freelance” biologist, Cristina would like to  promote the discovery of sponge species and their unique value among children, young scientists, and the general community. She has taught a class for 15 years on how to Identify sponges and their role in the ecosystem at a remote Island in Panama at Bocas del Toro (Smithsonian Tropical Research Institute). She has co-organized this type of summer school in Florida, Martinique, Yucatan (Mexico) and in her home country Venezuela. “Sponge taxonomist extinction is one of the major threats for sponge biodiscovery and conservation” she affirms. She has dreams of new places to explore and teaching to do around the globe

Where corals are dying from the warming ocean, some sponges are thriving and there may be higher rates of bioerosion by sponges with warmer ocean temperatures. And higher temperatures will affect common shallow water species.

Scientists still aren’t sure how ocean acidification may impact many sponges, but the bio-eroding sponges can break down a reef weakened by ocean acidification more easily. A distinct class of sponges, the Calcarea, would be destroyed in more acidic conditions since their skeleton is made solely of calcium carbonate.

Cristina says that sponges have lived here on earth for 700 million years and have gone through many changes. They are survivors.