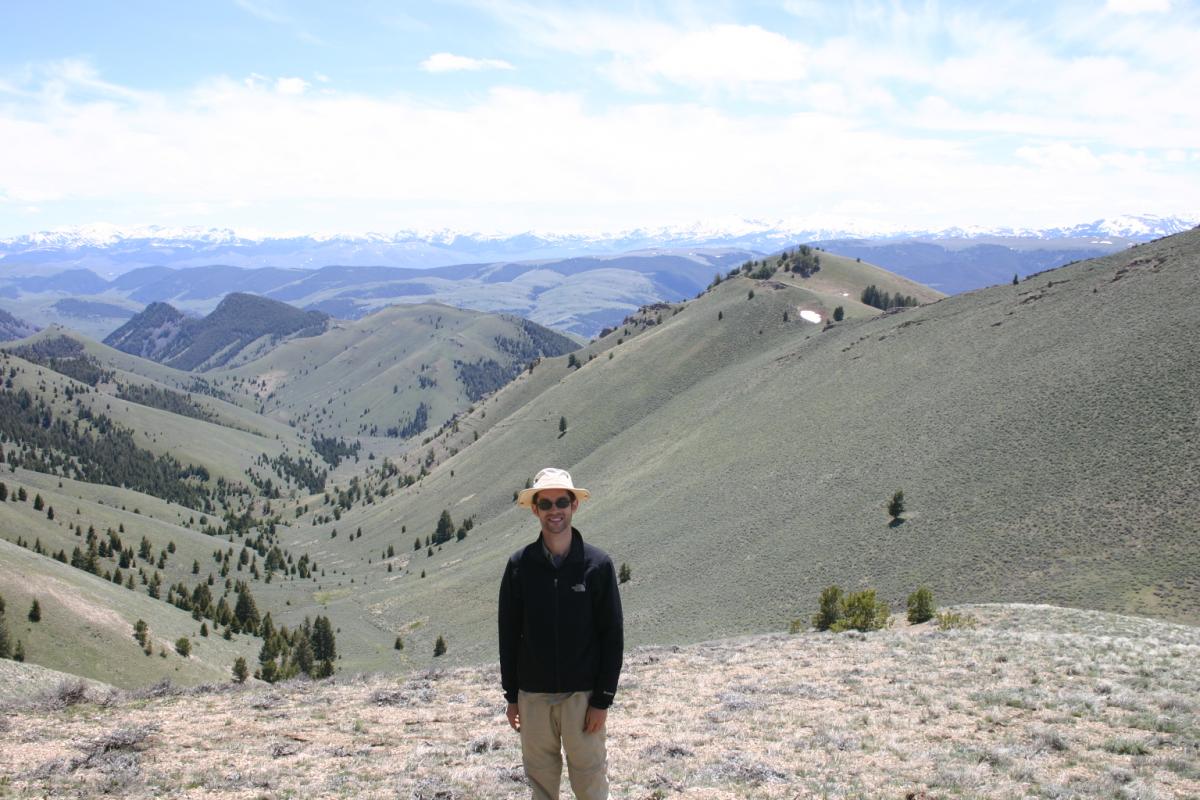 Like so many kids Matthew loved dinosaurs when he was growing up in Vancouver, B.C. It wasn’t a direct route from “dinos” to his current career, though. He was lucky enough to take a geology class in the 12th grade and discovered he was fascinated by fossils and rocks and geology. And, like many future paleontologists, Matthew enjoyed the outdoors, boy scouts and hiking. In college he liked chemistry and geology but wasn’t thinking paleontology until he took a class in it and thought: “I can do this!”

While an undergraduate at the University of British Columbia, Matthew did his senior thesis on ammonites. The questions that appealed to him the most were about paleoecology, diversity and abundance. And these big questions were most answerable with invertebrates like ammonites as these are more common in the fossil record.

In his current research, Matthew and his lab are: “Studying the effects of ocean warming, acidification, and deoxygenation on marine organisms during ancient mass extinctions.” The fossil record shows periods of rapid climate change similar to what’s happening today. These were caused by volcanic flood basalts that happened every few tens of millions of years. These events were the largest volcanic events in Earth’s history, triggering environmental changes on a large scale and mass extinctions. The volcanic carbon emissions led to ocean warming, acidification and deoxygenation— all of which are also occurring today. 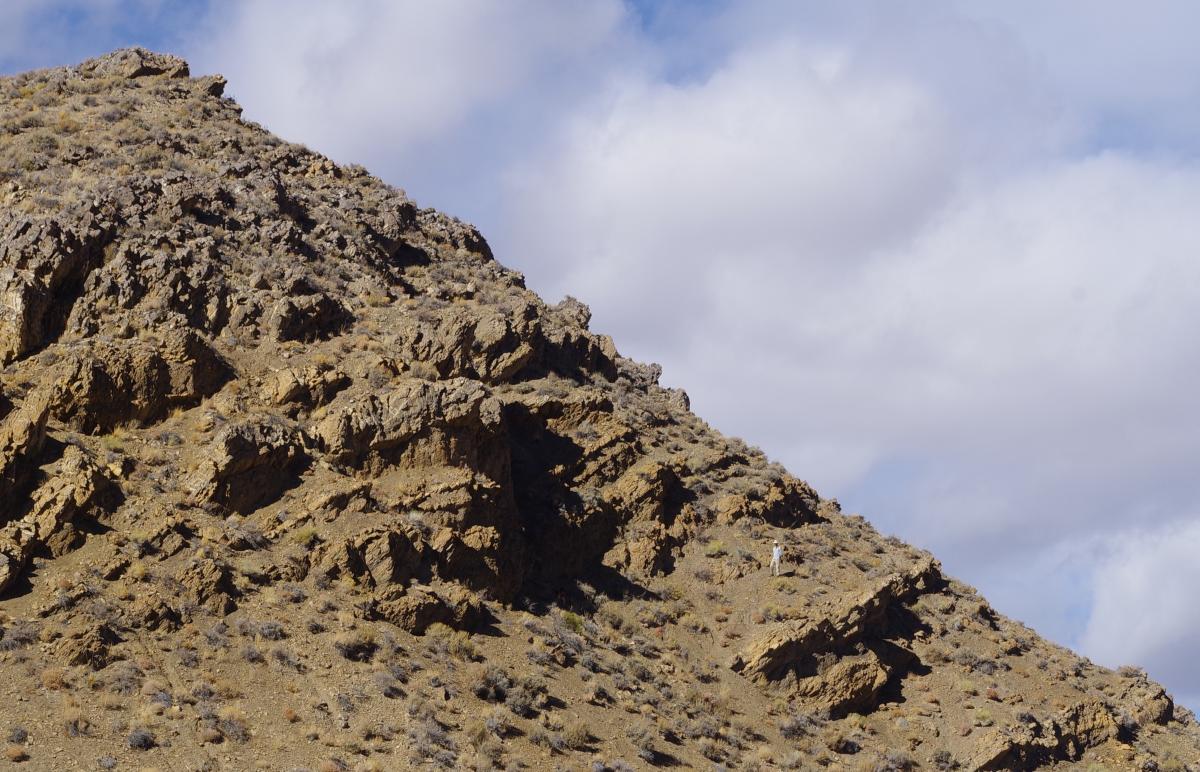 Can you spot Matthew Clapham at Triassic-aged sponge reef in Nevada?

Looking at the deep-time fossil record may shed light on what types of marine animals did a little better and which did worse during extinction events. Matthew’s research has found that some animals, like clams and snails did pretty well. But brachiopods did pretty badly. This led to clams and other molluscs being more common today and brachiopods being rarer. What helped the clams to survive? Is it about the shell? Or what the animal ate? Or is it something physiological like being good at dealing with carbon dioxide or how the animal controls its blood chemistry? In general he found that less active, heavily calcified or reef building organisms were less likely to survive an extinction event, while more active organisms survived better.

On a broad scale: what should we be most concerned with now during the present climate crisis? You can tell some physiology from fossils. The reason that brachiopods suffered more may be that they tend to have little soft tissue but lots of shell, which needs calcium carbonate. They also tend to have lower metabolic rates and are sedentary. Animals with higher energy can deal with carbon dioxide better. Brachiopods also don’t really have gills and perhaps have less control over the pH of their blood. There are still Brachiopods alive today, so some species must have been able to survive the Permian mass extinction. 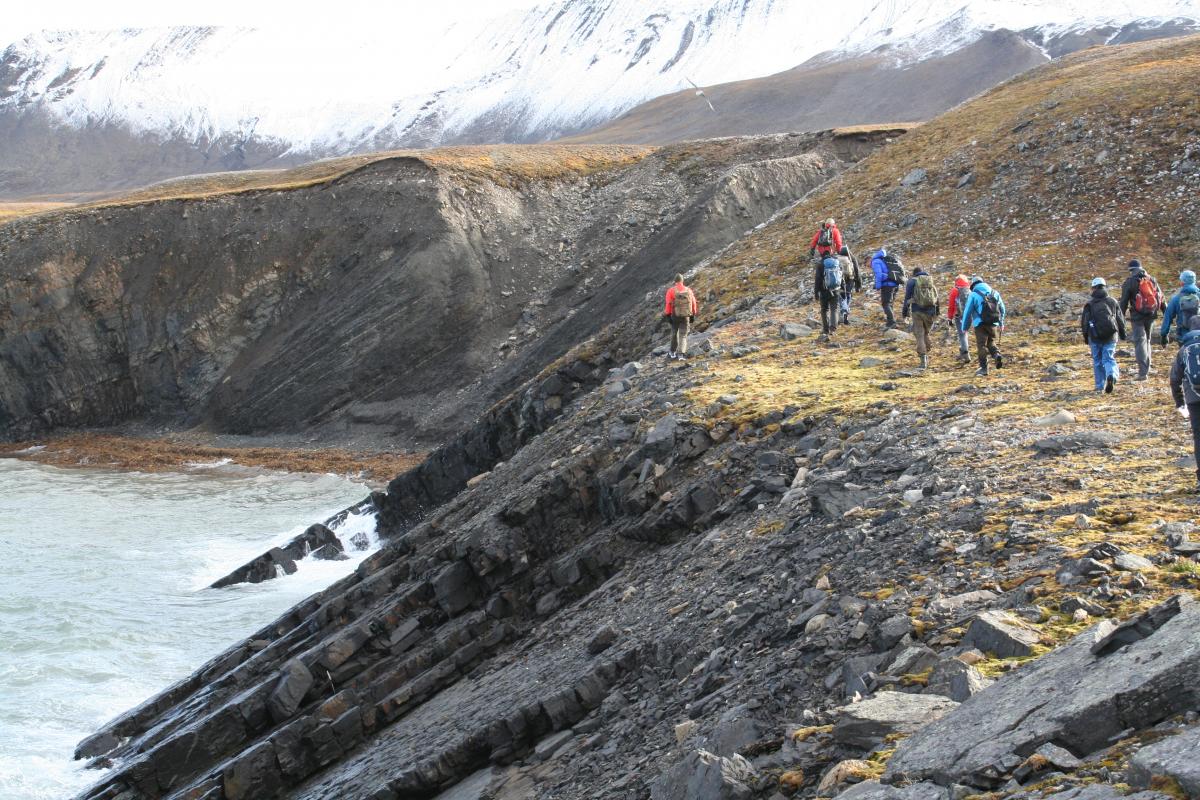 Visiting the end-Permian mass extinction on the arctic islands of Svalbard. The group is walking over Permian rock layers, and the extinction and start of the Triassic period are in the small cove.

Big extinction events tell us that it’s difficult to kill off all life. If some species survive, life can carry on. During the Permian extinction (about 252.94 million years ago to 251.88 million years ago) 96% of species went extinct. We really don’t know what’s missing now that thrived then. It’s possible that animals like worms, which don’t have shells, may have done better than other species during the rapid change. Because worms don’t fossilize, we don’t know.

Matthew’s past work has focused on end-Permian and end-Triassic events in the deep past. Now he’s interested in looking at more recent events – 50-100 million years ago. The organisms from that period are more related to those alive today. There were more crustaceans and sea urchins, for example. Looking at the survival rate of species after those events helps us answer questions about what might happen during our current climate crisis. Will a certain family of clams do well, for example?. And, how did algae that make calcium carbonate, called coralline algae, fare during past ocean acidification events? The coralline algae can be important for reef building. Scientists like Matthew are getting a more consistent and coherent picture of what happened in the past during high CO2 events to help us understand what is happening now. But what did he find that helps us understand today?

Although Matthew is a paleoecologist, he follows research on living creatures. He sees that work as complementary to his deep-time view. Experiments on species in a warmer, more acidic ocean today can give the details to better understand why certain animals did better or worse during past extinctions. There’s a lot of current research on sea urchins: there are big differences between species. One type of sea urchin will try to control its pH, but that costs energy. Other species have low pH anyway. These are physiological details that scientists can’t see in the fossil record. And to make things even more complicated, invertebrates have different life stages which will react differently to climate change. And none of these life stages are evident in the fossil record. During normal evolution, there is very little selective pressure for animals to deal with temperature and pH changes because the climate does not normally change rapidly. The fossil record shows that what is beneficial during “normal” background times may not be beneficial during times of rapid change. For example, having a large range mattered less during a mass extinction event. But now that there’s habitat loss in the ocean and on land, a large geographical range is probably important today.

Another trait that may make a difference in survival is activity. Animals that are more active should probably do better in a changing ocean than those that are stationary. Active animals can move to better conditions. The fossil record confirms that animals that move do seem to do better than those that don’t move. An example is coral, which don’t move and also have large calcium carbonate skeletons, both of which make them vulnerable during a changing ocean. Coral reefs are the most sensitive habitats to climate change; and therefore all the animals that depend on them are threatened.

Sharks are another active animal that do better than invertebrates during extinction events.. And if you compare sharks and bony fishes in rapidly changing environments, bony fishes don’t do as well. Bony fishes produce many eggs; sharks produce few large egg sacs. It could be that small eggs are more affected by ocean acidification because they have a greater surface area in contact with the more acidic water.

We asked Matthew what he would like to share with middle and high school students. He said  “earth science is a field that people don’t really know about. It’s interdisciplinary: there’s biology, physics and geology. It’s also a field that touches on so much of our lives: water, climate change and earthquakes, for example. If you are an earth scientist, you can make a difference in your community.” 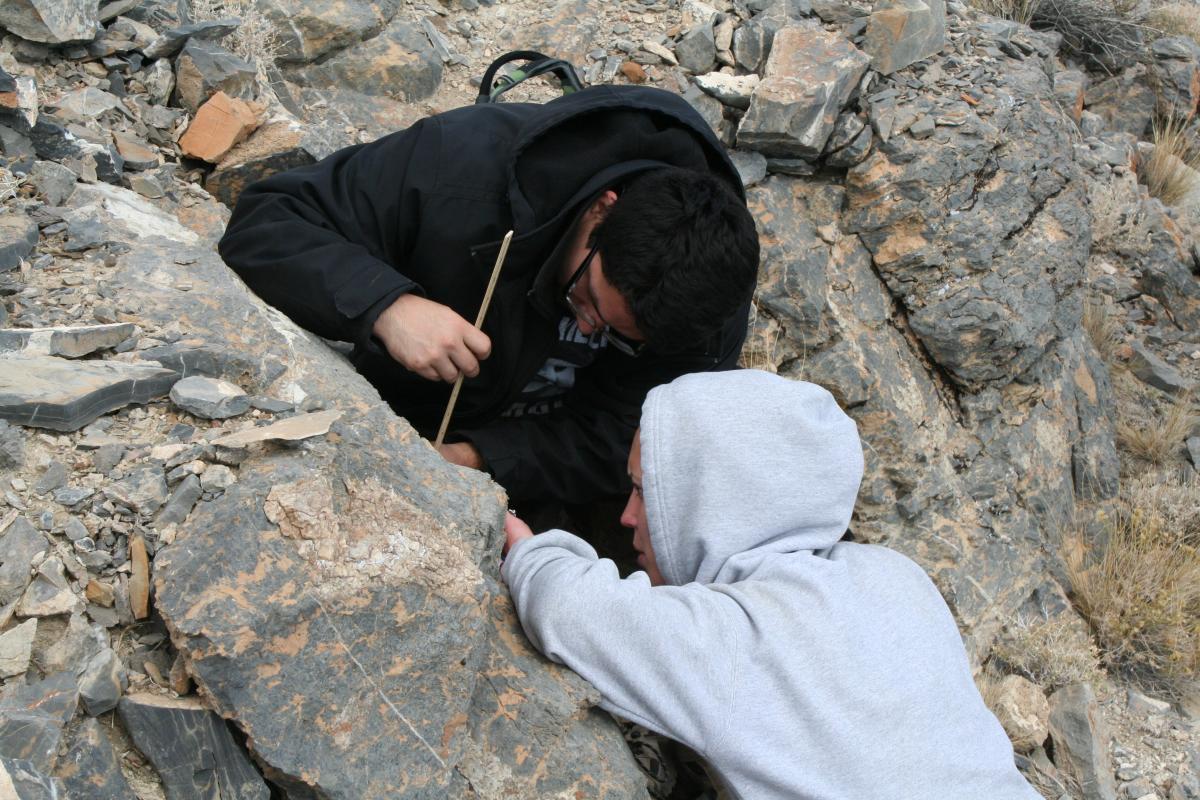 Paleontology students measuring the size of sponges in a fossil reef in Nevada.